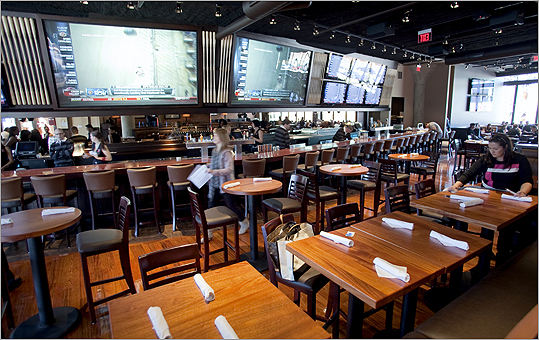 (Erik Jacobs for the Boston Globe) The interior of Jerry Remy's Bar and Grill on Boylston Street in Boston.
By Jenn Abelson Globe Staff / March 10, 2010

How much would you pay to cut the line?

The RemDawg is betting at least $500.

The broadcasting legend is trying to persuade baseball fans to fork over big money for “season passes’’ to the TV color commentator’s new restaurant, Jerry Remy’s Sports Bar & Grill, which is opening next week.

Patrons who shell out $500 will get to skip the line that forms before Red Sox games (packages are for either home or away games), have a guaranteed table (once the game starts), and receive a $25 food credit and one free beer per visit, along with invites to exclusive events (up to a $3,000 value).

And, of course, you get an autographed picture of Jerry Remy at your table (priceless).

It’s a bold pitch to make in the midst of the recession, especially since the $500 does not come with a seat in the park. But Red Sox Nation always seems willing to pay for new perks. Already, 170 people have signed up for the deal, which was launched last month.

Don Bailey, general manager and the guy who gave birth to the season-pass idea, said the restaurant is hoping to sell up to 300 passes. To win over fans, Remy’s has billed itself as an extension of Fenway Park, with a similar facade, exposed pillars, and waiters dressed in uniforms.

“This $500 season-ticket package can deliver an experience as close to an actual season ticketholder as possible, at a fraction of the price,’’ Bailey said.

For Chris Cakebread, a Boston University professor who teaches advertising and sports marketing, the season-pass package seems “just a little over the top. It’s certainly an over-exaggerated way to show your love for the Red Sox,’’ he said.

But Cakebread acknowledged the competition around Fenway has intensified in recent years, so businesses have to try what they can to stand out.

Remy’s is hoping to use its season-pass offer to attract fans year-round, with $350 packages for the and $250 for the that give the same perks for all the games.

Phil Cronin, a devout member of Red Sox Nation, said any true fan who has been going to Fenway for awhile knows when and where to eat to avoid lines and get reasonably priced good food. He won’t be lured by Remy’s offer, but doesn’t blame the newly fashioned restaurateur, either.

“I think Remy is a great color commentator. I understand that he needs to cash in while things are hot,’’ Cronin said.

“I can’t blame him for trying to grab every cent he can from unsuspecting ‘fans.’ ’’

A look at the new restaurant opening on Boylston St.