Geithner points to housing crisis as cause of delay 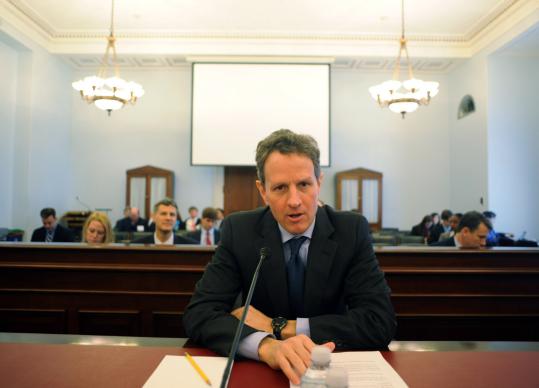 WASHINGTON - The Obama administration will wait until 2011 to propose an overhaul of mortgage giants Fannie Mae and Freddie Mac, Treasury Secretary Timothy Geithner said yesterday, arguing that he wanted to put some distance between a new system and what he called “the worst housing crisis in generations.’’

Geithner also told lawmakers the administration had no intention of including the two entities in the federal budget, even though they were taken over by the government in 2008 as they faced mounting losses from mortgage defaults.

“That’s going to be a difficult set of reforms, but we do not believe it’s necessary to consolidate the full obligations of those entities onto the balance sheet of the federal government at this stage,’’ Geithner told the House Budget Committee.

Fannie Mae and Freddie Mac are vital players in the mortgage industry, purchasing home loans from lenders and selling them to investors. They own or guarantee about half of all residential mortgages. Had they gone broke in 2008, millions of people would have been unable to get mortgages.

The administration’s Republican critics have argued that President Obama should have proposed sweeping changes to Fannie Mae and Freddie Mac last year, when he demanded an overhaul of financial regulations. The administration had been expected to announce its plans this month when it submitted its 2011 budget request.

“We want to make sure that we are proposing these changes at a time when we have a little bit more distance from the worst housing crisis in generations,’’ Geithner said.

That argument is exactly the opposite of the case Geithner is making for new financial regulations. Geithner is pressing Congress to move swiftly on new Wall Street rules, saying action must occur before memories of the financial crisis recede.

“We can’t do everything right away,’’ he said.

But Congress might move faster on the future of the mortgage giants.

“The sooner you get some clarity about where the ultimate objective is, the better,’’ he said.

In a way, Geithner’s delay could give Frank room to devise his own plan.

“I think he’s going to move forward, perhaps with a bit of pique at not having the administration’s guidance, but with a lot more freedom,’’ said Karen Shaw Petrou, managing partner at Federal Financial Analytics, a consulting firm that advises financial institutions.