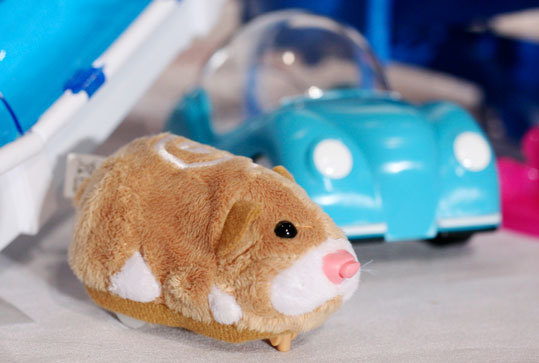 The Zhu Zhu Pets hamster is this holiday season's must-have toy, and is in short supply, following in the footsteps of Cabbage Patch Kids and Tickle Me Elmo. (AP)
By Jack Pickell Boston.com / November 25, 2009

There’s a mad scramble going on to locate robotic hamsters. They’re cute, they talk, and, best of all, they’re not too pricey. Most importantly, they’re this year’s must-have holiday toy.

Following in the fuzzy footsteps of Tickle Me Elmo, Furby, and FurReal Cats, the hamsters – specifically Zhu Zhu Pets – are what kids want in 2009.

Some savvy shoppers started early. Two parents I talked to found the robotic rodents in the past month, on their second or third try. They’re the lucky ones. Others I talked to have come up empty. The Zhu Zhu outlook through the rest of the year is uncertain.

Striking out at the stores doesn’t necessarily mean you’re out of the game, however. There’s always the secondary market.

EBay can land you a hamster, but expect to pay exponentially more then the $9.99 retail price. An informal search found Zhu Zhus selling for about $60 on the online auction site.

Before eBay, before the Internet, there were other must-have toys. If you were alive in 1983, you remember the Cabbage Patch craze. Red-hot in the fall of ’83, supply of the dolls didn’t come close to demand. And that made things ugly as Christmas neared.

I was 19 that fall, working in a record store across from the Liberty Tree Mall in Danvers. One early December morning, my friend who worked next door at Child World called me at the record store, and asked me to meet him out back. He led me into the giant Child World stockroom, walked me toward a pile of boxes stacked near a set of swinging doors that led to the sales floor, and told me to look through the doors’ blurry plastic windows. What I saw scared me… and I didn’t even work there. It was the retail equivalent of an angry mob, men and women looking tired, mean, and shouting for Cabbage Patch Kids. All that was missing was a few torches. The boxes near the door were full of the dolls, but none of the employees dared to go near the crowd. They’d seen the TV news in recent days, footage of shouting matches, and tug-of-wars between shoppers desperate for the must-have toy.

I admit it – I bailed on my friend. I had to get back to my own customers, who were hurriedly scooping up records by Van Halen, Men at Work, and Duran Duran. (I heard later that the Child World boys solved their problem by moving the boxes to another set of doors, in the baby furniture department, and quietly putting the dolls out there, with no customers in sight.) It probably would have been worth sticking around just to see the massive rush when the prized dolls were discovered.

I was a witness (sort of) to a similar scene 13 years later, as a TV news producer. Working the overnight shift on Black Friday morning, I got a call from someone in the parking lot of a Walmart on the North Shore. A tragedy, the caller said. The store had advertised in a newspaper circular that Tickle Me Elmo (1996’s must-have toy) would be on sale beginning at 3 a.m. Customers starting lining up before midnight, and several hundred were in line when the doors opened. But there was no Elmo. They’d never arrived at the store. Confusion turned to anger, as many in the crowd refused to accept the news. The caller feared a riot.

I made the decision to wake up one of our videographers who lived on the North Shore, and tell him to get over to Walmart. He reluctantly agreed, and what we got was pure gold. He shot video from behind the customer service desk, looking over the shoulder of a helpless, nervous employee, at another angry mob chanting “Elmo… Elmo… Elmo.” We sent our reporter, and were live from Walmart at 5 a.m., and every half hour thereafter. We were the only station that got the story. It was one of my favorite moments in TV news.

Those two glimpses of angry crowds, furious and frustrated adults who couldn’t get their hands on the toy they wanted, always stayed with me. It made me remember that perspective is easy to lose around the holidays. Those savage shoppers were really just dedicated parents, desperate to avoid disappointing the most important people in their lives. But at some point, the frustration, stress, and time wasted standing in line just isn’t worth a toy – even a must-have toy. No hamster? Big deal. Kids will get over it. They may not even notice if they open other presents that excite them. And if Mom and Dad are a little less stressed, less tired, and more available to their kids around the holidays, maybe that’s an ever better gift.

Jack Pickell is a Boston.com news producer, the father of two boys, and actually found a Nintendo Wii when they first came out. He can be reached at jpickell@boston.com.

Photos: Must-have toys throughout the years