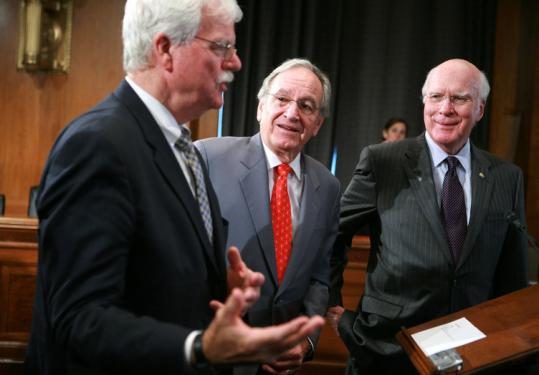 WASHINGTON - Democrats in Congress are trying to counter another Supreme Court decision on employment discrimination, this time taking aim at a ruling that makes it harder for older workers to prove age bias.

A measure introduced yesterday would effectively reverse a 5-to-4 decision from earlier this year that said workers must show age was the decisive factor in a demotion or layoff.

Previously, older workers had to show that age was just one factor in the employment decision. Critics of the ruling by the court’s conservative majority say it means older workers now face a higher burden of proving their claim than those alleging race, sex, national origin, or religious discrimination.

Harkin introduced the bill at a news conference joined by Jack Gross, the losing plaintiff in the Supreme Court case. Harkin said the timing of the court’s decision in Gross v. FBL Financial is even more troubling considering unemployment figures for workers 55 and older are at an all-time high.

In response to another high court ruling, Congress earlier this year passed a bill that gives workers more time to take their pay discrimination cases to court. The Lilly Ledbetter Fair Pay Act - the first measure that President Obama signed into law - countered a 2007 Supreme Court decision that said workers had only 180 days to file pay-discrimination lawsuits.

Michael Eastman, executive director of labor policy at the US Chamber of Commerce, said the business group understands the concerns that Harkin and others have raised, but has not had a chance to review the bill.

“It would be easy for legislation to have impacts far beyond that case, and we want to carefully look at any proposals,’’ Eastman said.