Dealers add other incentives in bid to entice buyers 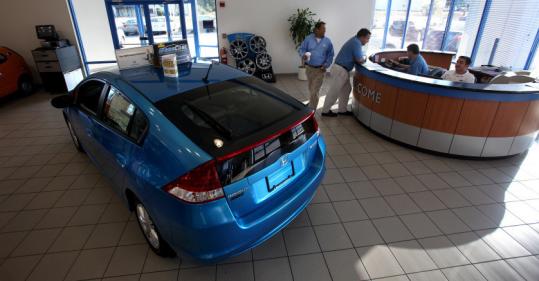 Business is slower at Silko Honda of Raynham now that the Cash for Clunkers program is over, but the dealership is making sales. (Michele Mcdonald for The Boston Globe)
By Megan Woolhouse Globe Staff / September 19, 2009

It has been nearly a month since the car-buying frenzy of the Cash for Clunkers program ended, and many area auto dealers are longing for the good old days of July and August.

Like consumers nationwide, Massachusetts residents rushed to take advantage of the federal voucher program, which offered them up to $4,500 on old gas-guzzlers to be put toward the purchase of new, more fuel-efficient vehicles. About $65 million worth of vouchers were handed out statewide during the monthlong program that ended Aug. 24.

But once the federal money dried up, so did the sales rally. Now, customers at dealerships like Silko Honda in Raynham are few and far between, and inventory is once again accumulating.

Manager Adam Silverleib said business was “pretty intense’’ as a result of the federal stimulus program, with the dealership hustling to accommodate customers and handle the piles of paperwork required for them to receive reimbursement on vouchers. “Now we’re kind of back to where we were in the spring,’’ he said.

In an attempt to draw customers back to showrooms, some dealers are offering new incentives, albeit none as enticing as a $4,500 for a rusting junker. Silko, for example, is promoting 2.9 percent financing on new Accords, along with other deals on its website.

Nationwide, customers snatched up 700,000 new cars, most of them foreign-made, and the government ended up paying out nearly $3 billion toward the purchases. But from the start, analysts predicted that Cash for Clunkers would not boost sales for the year. September’s sales swoon seems to be making their case. Car sales are usually slow after Labor Day, but because of the recession consumers this year are especially reluctant to say yes to major purchases. To make matters worse for dealers, most are still waiting for voucher reimbursements.

“It was probably, in the end, a complete waste of taxpayer money,’’ said John Wolkonowicz, a senior auto analyst at IHS Global Insight, Lexington forecasting firm. “The dealers, who were supposed to be the primary beneficiaries, many were forced into cash flow problems because the government didn’t pay them in a timely fashion.’’

From the outset, there were problems with the Car Allowance Rebate System. It was supposed to start July 1 but was delayed until July 24. The rules were complicated, and the list of qualifying vehicles and other requirements changed repeatedly. And in addition to the formidable paperwork, the government website set up to process the deals kept crashing, creating a backlog.

Ray Ciccolo, president of Village Automotive Group, which operates eight Boston-area dealerships, said he has received $400,000 from the government, but that is only half of what he is owed. Ciccolo was in Washington last week to hear Transportation Secretary Ray LaHood address the National Automobile Dealers Association. Ciccolo said LaHood pledged to have all claims paid by the end of this month.

“There isn’t much you can do except wait,’’ Ciccolo said.

That does not mean that Ciccolo and other dealers in Massachusetts condemn the program. Several said they were grateful for it because it helped them quickly move inventory and brought in a barrage of unexpected customers.

Richard White, general manager at Cityside Subaru in Belmont, said the dealership sold 52 cars through the program and that he has been reimbursed for 51. His biggest problem has been trying to rebuild inventory since it ended. “By every measure, the program was extremely successful for us,’’ he said.

The Department of Transportation said it has approved 83 percent of dealer rebate applications and was working through snags to process the rest.

“This program was very good at getting product off the lot, but there haven’t been long-term benefits,’’ he said. “Dealers are reporting that showrooms are pretty dead right now.’’

Wolkonowicz said the fall slowdown may have been worsened by the program because many buyers came out early to take advantage of the program instead of waiting until now to shop.

In Raynham, Silverleib is relying heavily on longtime customers ready for a new model. But he is realistic about the state of the auto business, and skeptical that the economy is out of the woods.

“Speaking as someone on the front lines, we’re still in a recession,’’ he said.

The 10 most popular cars bought under the 'clunkers' program.
Your comment is subject to the rules of our Posting Policy
This comment may appear on your public profile. Public Profile FAQ