Luxury condos at mall up for auction 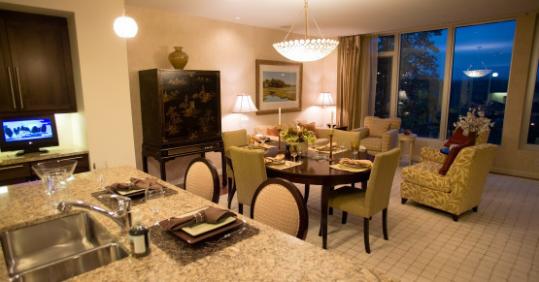 Bankrupt mall operator General Growth Properties is planning to auction off more than 40 high-end condominiums attached to the upscale Natick Collection with minimum bids starting at $160,000, about 70 percent below previous asking prices.

The 215-unit project, known as Nouvelle at Natick, opened last year and was supposed to usher in a new era of suburban living - marrying shopping and luxury - without the hassles and high prices of the city. But with only 37 of the residences sold or under contract, GGP has hired Accelerated Marketing Partners to handle the auction of 42 units on Oct. 4 as a way to jump-start sales and get some desperately needed cash.

“The homes are rather spectacular, but clearly there was a disconnect between what the consumer wanted to pay and what the developer wanted to get,’’ said Jon Gollinger, East Coast chief executive and cofounder of AMP, who added that the auction will determine the value for the remaining 100-plus residences.

Nouvelle is one of about 10 major developments in Massachusetts that have hit the auction block as the housing market unraveled over the past few years. Developers, facing tight lending markets, overdue debt, and a slow housing recovery, have turned to auctioneers to sell off high-profile properties not in foreclosure. But Nouvelle is the first project that is using an auction as a grand opening sale of sorts, rather than as a way to cheaply sell the last few units.

It’s also the first uber-luxury development in the suburbs to head to auction, offering amenities such as a sports club membership, rooftop garden, 24-hour concierge, and, of course, instant access to the mall.

“It’s an extremely efficient way to clear the market and remaining units in a project in a short amount of time and let developers move on,’’ said John Ranco, a broker and president of the Greater Boston Association of Realtors. “And buyers who were on the sidelines are coming out and getting good deals.’’

AMP served as the auctioneers last spring to sell off about 40 units at Longwood Towers in Brookline, where starting bids were as much as 59 percent below asking prices. The auctioneers unloaded 42 units that day for a total of $26 million, according to Gollinger. In June, AMP helped sell about 35 units in the 1850 project in the South End.

AMP also worked on one of the first major auctions during the recent downturn - Folio Boston in 2006 - a new condo development on Broad Street in downtown Boston. Gollinger said 34 units sold for $26 million in one hour and 45 minutes. Other condos that have been put up for auction include the Broadluxe, a loft project in the Financial District, and The Modern, at the fringe of the South End.

“It’s the way the market is going. When you set a date for when that property is absolutely going to sell - that’s what brings these people in, especially people who have sat on the sidelines in the past,’’ said Charlie D. Gill, vice president of sales at JJManning Auctioneers.

Gollinger said most residents living at properties where an auction is being planned initially react with some surprise, concern, and fear. But the majority, he said, eventually realize the best thing that can happen is to live in a 100 percent sold community. “They bought into a vision with a community of homeowners,’’ he said. “In the long run, they know the values will come back.’’

Earlier this year, the project’s developer tried to lure buyers with incentives, such as offering to make the buyers’ mortgage payments for them for several months, or covering some condo fees, which are 61 cents per square foot, in advance. But that made little difference with the tight lending market and deteriorating economic conditions.

In the case of Nouvelle, AMP and other real estate analysts say price - and not the idea of living in mall - has been the main obstacle to attracting buyers. The residences were part of a multimillion-dollar expansion at the shopping center that included a luxury wing with new merchants such as Neiman Marcus and Burberry. The Natick Collection has also struggled since opening in the fall of 2007, just as consumer spending began to slow down.

General Growth filed for bankruptcy protection in April after the Chicago real estate investment trust was unable to sell some of its property leases - including one at Faneuil Hall - to raise money to refinance nearly $1 billion in debt. Contractors recently filed a lien on the condo complex. In papers filed in US Bankruptcy Court in New York, Silktown Roofing Inc. claimed it is owed more than $326,000 by Dimeo Construction, the general contractor for the mall expansion and the condos. Dimeo filed its own $12.6 million lien on the Nouvelle condos in May. The case is still proceeding in bankruptcy court, but General Growth received approval to move ahead with the auction.

Nancy Nelson, who put down a $23,000 deposit in 2007 shortly before losing her job, has been fighting for more than a year to get her deposit back.

Nelson, who said her current home in Marlborough is in foreclosure, said, “Natick overestimated the attraction of the units. For the price of the units they were offering, it’s not the bustling, exciting metropolitan type of feel that was promoted during the initial phases. It’s almost like a ghost town.’’

On the auction block

View a couple Nouvelle at Natick condos to be auctioned
Your comment is subject to the rules of our Posting Policy
This comment may appear on your public profile. Public Profile FAQ