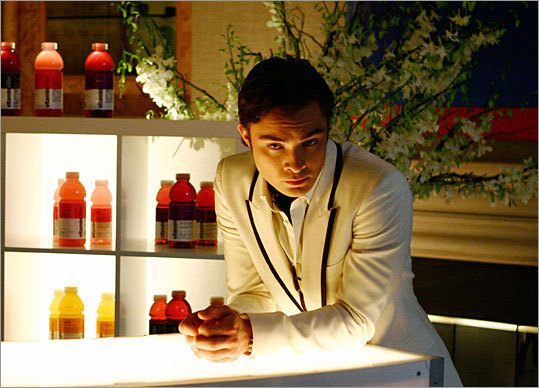 Advertisers are inserting themselves more deeply into TV shows than anyone thought possible just four or five years ago.

“Gossip Girl’’ opened its second season on the CW network with a party set in the luxurious Hamptons where vitaminwater, a product made by Coca-Cola Co.’s Glaceau unit, was served. Different vitaminwater products were then mentioned in dialogue on the show throughout the year. In some instances, the drinks had as much screen time in a single episode as a guest actor or recurring minor character.

The practice of product placement - in which advertisers pay to have their products or logos appear on screen during a program - has been intensifying for years. Even so, TV networks were once more vigilant about how much screen time they’d give advertisers during most dramas or comedies for fear of offending viewers. Now media outlets are loosening their restrictions. The result? Eye-popping appearances by advertisers in places where viewers would normally expect to see story line and character development.

The flailing economy “makes everything at least discussable,’’ said Peter Tortorici, a former CBS executive who is president of WPP Group’s Group M Entertainment, a specialist in creating deals that weave advertisers into content. This new willingness often creates “very positive’’ ideas for integrating products into shows, he said, but “some of it will result in mistakes.’’

Indeed, this past TV season featured several daring placements that drew notice from the press or blogs. Dr Pepper played an integral part in an episode of CW’s “90210,’’ in which characters decreed a road trip they were taking wouldn’t be the same without the soda. On NBC, Subway was able to have its sandwiches displayed in two different episodes of “Chuck’’ and have an ad slogan about serving “$5 footlongs’’ uttered by a regular character on the show. Even Walt Disney’s ABC, which has a reputation among advertisers for being very controlling of its air, allowed Paramount Pictures to show the USS Enterprise from the new “Star Trek’’ movie flying out of the “O’’ during the title sequence on the network’s popular drama “Lost.’’

“As the media landscape continues to become more fragmented, we do believe it is necessary to find creative ways to reach consumers and maintain relevance,’’ said Elena Zanolin, entertainment marketing manager for Dr Pepper.

When vitaminwater executives approached the CW about a potential placement deal in “Gossip Girl’’ in the summer of 2008, recalled Alison Tarrant, CW’s senior vice president of integrated sales and marketing, all sides thought it was a good idea. The producers wanted to start the buzzy program’s second season off with something different - an event that could bring all the teen characters together after they had gone their separate ways at the end of the first season.

The Hamptons was an ideal place to film the show, Tarrant explained, “but in this economy, that cost money to shoot on location. The only way it was going to be possible for the shoot to be shot on cost would be to bring in somebody to help offset those costs.’’ The deal with vitaminwater also included the marketer sponsoring a second-season launch party in the Hamptons, said Tarrant, which goosed publicity for the program.

But Tarrant said the network isn’t out to annoy viewers or shove ad logos in their faces. “Our audience is aware that product placement exists and that advertisers are probably paying for some of the more branded mentions that they see in the body of the show,’’ she said. “I think the audience gets it, but in many cases we look to give the audience value back for their tolerance of it,’’ such as a glitzy on-location shoot or better casting.

Viewers can expect to see familiar products continue to jockey for screen time and dialogue. Part of the reason that comedic spy-drama “Chuck’’ will return to NBC in 2010 is because Subway agreed to a promotional partnership with the show many expect will include putting the sandwich chain’s food and ad messages into the program. And ABC remains “open’’ to doing deals such as the spaceship in “Lost,’’ said Geri Wang, the network’s senior vice president of primetime sales, but intends to be “very, very selective.’’

Other media sectors also are trying out new kinds of ads that look very similar to content. A marketer can use Twitter and Facebook to send out messages that are indistinguishable from the usual chatter one might expect from friends and acquaintances they regularly follow. And the Los Angeles Times earlier this year caused a stir when it ran an ad on its front page for NBC’s “Southland’’ police drama; the ad was made to look like a newspaper article (and was labeled “advertisement’’ to make sure readers understood what it was).

Advertisers “are looking for as much value as our money can get,’’ said Stacey Shepatin, senior vice president and director of national broadcast at Boston’s Hill Holliday ad agency. “The network that hustles to try to create them for us’’ could win additional dollars.

TV fans may have to resign themselves to the fact that advertising has moved from the breaks between program segments into the programs themselves. “I think viewers expect it more and more,’’ said Shepatin. “And if they don’t want to pay for content, these are the types of things they are going to have to get used to.’’

Brian Steinberg is the television editor of Advertising Age.