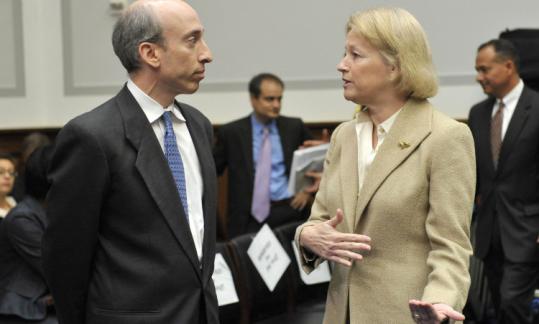 Securities and Exchange Commission chairwoman Mary Schapiro and Gary Gensler, who heads the Commodity Futures Trading Commission, have agreed on how the agencies - turf antagonists in the past - could share regulation of the so-called over-the-counter derivatives market.

They appeared together at a hearing of the House Financial Services Committee and made the case for expanded authority for their agencies to supervise the $600 trillion market, now largely unbridled.

But several Republicans questioned a grant of more regulatory power, pointing to recent deficiencies in the run-up to the financial crisis of agencies such as the Federal Reserve and the SEC. They pointed most notably to the SEC’s failure to detect the massive Bernard Madoff fraud over decades despite red flags raised by whistle-blowers.