US reaps windfall in firm’s bailout 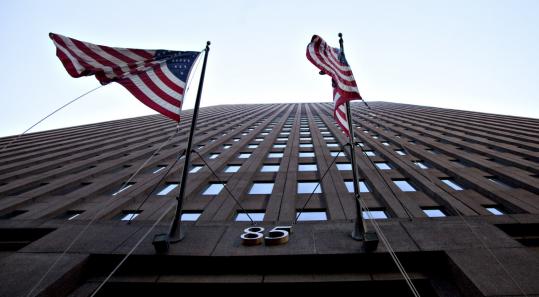 Goldman Sachs Group Inc., headquartered in New York, will repay the US Treasury $1.1 billion in warrants the government received when it invested $10 billion in the firm last October. The company’s share price has surged 42 percent since then. (Jeremy Bales/ Bloomberg News)
By Christine Harper Bloomberg News / July 23, 2009

NEW YORK - Goldman Sachs Group Inc.’s repayments to the government of last year’s bailout money, including an agreement yesterday to repay warrants, generated a 23 percent annualized return for US taxpayers.

Goldman Sachs agreed to the Treasury’s request for $1.1 billion to repay warrants the government received when it invested $10 billion in the New York-based firm last October. The payment is in addition to $318 million in preferred dividends.

That 23 percent return compares with the 42 percent surge in Goldman Sachs’s share price since October, and the 5.1 percent gain in the Standard & Poor’s 500 Index. Goldman’s decision follows criticism of the bank by lawmakers who questioned its decision to set aside a record $11.4 billion to pay employees in the first half of the year.

The company’s warrant transaction “was the best deal for taxpayers yet,’’ said Linus Wilson, a finance professor at the University of Louisiana at Lafayette.

The firm is paying about 98 percent of the warrants’ value, based on Wilson’s use of the Black-Scholes and Merton option pricing models. By contrast, he estimates that BB&T Corp. and US Bancorp have struck deals with Treasury to pay less than 60 percent of the value of their warrants.

Unlike JPMorgan Chase & Co., the second-biggest US bank by assets, Goldman Sachs agreed to pay the full amount sought by Treasury for its warrants. New York-based JPMorgan, which has repaid $25 billion it received from the government, said earlier this month that it couldn’t agree with the government on its warrants’ value, leaving them to be sold in a public auction.

Goldman Sachs was one of the first nine banks to receive capital from then-Treasury Secretary Henry Paulson in October as the government tried to stabilize the financial system. Last month, Goldman Sachs returned its $10 billion, as did rivals including JPMorgan Chase and Morgan Stanley, enabling the banks to shed restrictions on bonus payments to employees.

The 23 percent annualized return to taxpayers “is reflective of the government’s assistance, which benefited the financial system, our firm, and our shareholders,’’ chief executive Lloyd Blankfein, 54, said in a statement. “We are grateful for the government efforts.’’

Last week, Goldman Sachs said it earned a record $3.44 billion in the second quarter and disclosed that it had set aside $11.4 billion to pay salaries, bonuses, and benefits in the first six months of the year.

JPMorgan and Morgan Stanley, which refunded $10 billion, haven’t yet repurchased their warrants.

“We made a bid on the warrants, based on an independent appraisal, which the Treasury turned down,’’ Joseph Evangelisti, a spokesman at JPMorgan, said in an e-mailed statement on July 10. “According to this process, the Treasury will now be able to auction the warrants in the public market, which will result in the actual market price.’’