Dealing with the rain 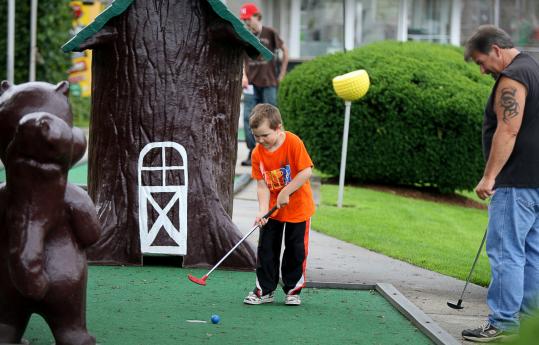 Salon Capri owner Nicholas Penna Jr. is doing what he can to keep the rain from washing profits away.

After weeks of weather-related cancellations, Penna launched a Puddle Jumper pedicure special, which lowers the price of the Newton salon’s luxury pedicure by $1 each day it rains in June - and includes an umbrella-covered escort from the parking lot. By yesterday, the $45 treatment was $38, a price Penna didn’t think he’d ever get to.

“I feel like Barry and Eliot when they never thought that the Red Sox would win the Series,’’ Penna said, referring to the Tatelman brothers of Jordan’s Furniture, which promised to refund customers’ money for certain purchases if the baseball team won the championship in 2007 - which it did.

When the rain falls, so do sales. Just as the recession has been keeping some customers away, local businesses are now having to contend with 21 days of precipitation - and counting - this month. So, companies like Salon Capri are offering special discounts, extending sales, and dreaming up new creations to give customers a reason to come out of hibernation.

“In this economy people are finding all the excuses they can to stay in,’’ said Banq restaurant co-owner Hemant Chowdhry. “Oh, it’s misty outside, let’s stay. We have to give them a certain reason to come out.’’

“We wanted people to remember that hey, it’s still summer,’’ he said, especially when a new sidewalk patio opens in July.

Down the street at the chic restaurant Stella, chef-owner Evan Deluty is also offering a new weather-oriented drink special, one optimistically titled the Sunrise - a tequila punch of sorts with Patron Silver, simple syrup, and fresh pineapple, lime, and orange. His bartenders, who keep lists of regular customers, are promoting the $9.50 cocktail through Facebook, Twitter, texts, and e-mail.

Regardless of how tasty the drink is, Deluty knows clear skies are the key. “We’ve completely lost the patio,’’ he said. “That’s one of our selling points.’’

In some cases, the damp weather has driven business owners to extend discounts. Diana Fay of Route 1 Miniature Golf & Batting Cages in Saugus decided to continue accepting the $1 off coupon on its website, which was supposed to expire June 10, through the end of the month. The rain has caused the miniature golf spot with the iconic orange dinosaur to shorten its hours or close all together 12 times this month, Fay said, driving down business 5 percent over last June. Even something as small as $1 off - regular prices are $5.00 to $6.50 for 18 holes - can bring people in, she said.

At women’s clothing store Turtle on Tremont Street, the rain prompted owner Storey Hieronymus Hauck to move up her annual summer promotion, this year dubbed the “Chase Away the Rain’’ sale. Almost everything in the store is 30 percent off, and Hauck threw in a limited-time $20 coupon for customers on the mailing list.

“Our end-of-season sale normally starts after July 4,’’ she said. “The rain made us interested in starting our sale earlier than we normally do.’’

Even stores that don’t normally run sales have been delving into discount land to survive the rainy season. Kingston Street house wares and furniture store Vessel held a 20 percent off “Rainy Daze’’ sale the weekend before last and followed it up with an ongoing “Buckets of Savings’’ sale, which offers 20 percent off in-stock house wares.

“Psychologically, we had enough, and it seemed like our customers had had enough,’’ said co-owner Stefane Barbeau.

Barbeau normally considers sales a “slippery slope,’’ but unusual times call for unusual measures. Vessel’s foot traffic and online orders usually spike in mid-June, but this month’s sales have been about the same as April’s. Much like last year’s Christmas shopping season, he said, the summer shopping season is starting later than usual because of the weather as well as the lousy economy. “It’s a double whammy,’’ he said.

Patrice Vinci knows all about the double whammy: She opened her self-titled salon on Newbury Street in the heart of the downturn eight months ago. She also knows rain makes hair frizzy, which is why she’s offering first-time clients a free blow-dry - a $50-$80 value - this week. “I’ve been battling a tough economy for a while,’’ said Vinci. “The rain is nothing compared to everything else that is happening.’’