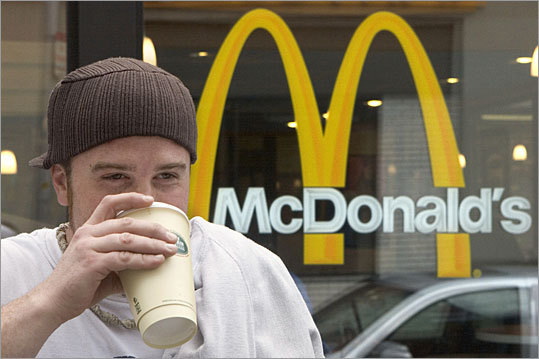 It’s cornered the market on Big Macs, fries, and shakes. And now McDonald’s is riding a massive marketing campaign to make gastronomic gains in premium coffee.

Not only has the Golden Arches stolen share from java leader Starbucks as the place most preferred by coffee drinkers, but McDonald’s has also dislodged Dunkin’ Donuts from its second-place spot, according to the May 2009 survey by BIGResearch of more than 8,000 consumers.

McDonald’s is “like a 9,000-pound gorilla,’’ said Dennis Lombardi, executive vice president of food service strategies for WD Partners, a restaurant and retail design and development consultancy. “They have made a very strong push to build share with its McCafé brand and to show it is an alternative to coffeehouses.’’

Free trials and slashed prices at both McDonald’s and Starbucks in recent months also have put increased pressure on Canton-based Dunkin’ Donuts, marking one of the fiercest stretches in the java war. The 7-Eleven convenience store chain also jumped into the fray with its recent introduction of iced coffee. And although Starbucks has shuttered shops across the country, the Seattle-based giant still managed to unseat Dunkin’ Donuts, which is in the midst of a nationwide expansion, as the best coffee in Zagat’s 2009 Fast Food Survey of more than 6,000 people.

“We’ve obviously had some kind of competitive onslaught from McDonald’s and Starbucks,’’ said Nigel Travis, the new chief executive of Dunkin’ Brands Inc. “But we seem to be withstanding that well.’’

Dunkin’ is a private company and does not release sales or other financial details. But Travis said the two coffee competitors have made the chain even sharper on pricing across food and beverage categories, including the recent launch of 99 cent lattes in New York.

“The real question is whether McDonald’s can sustain the kind of focus they’ve had for the last two months, putting nearly $100 million behind the coffee push,’’ Travis said.

“They can’t promote coffee forever because they’ve got lots of other products to focus on.’’

A McDonald’s spokeswoman, Danya Proud, said the McCafé advertising campaign, featuring premium coffees, espressos, and other specialty drinks, was one of the company’s biggest promotions since the 1970s.

“Coffee continues to be a significant opportunity for McDonald’s,’’ Proud said. “We will continue to see a heavy promotion of our new McCafé through the summer.’’

Meanwhile, Starbucks is ramping up its efforts to woo back customers by grinding beans each time a new pot of coffee is brewed, instead of grinding coffee only in the morning. Last month, the company also launched a marketing campaign promoting the quality of its coffee and values behind the brand. Additionally, Starbucks teamed up with MSNBC to sponsor its morning news program.

With the java wars intensifying in a weak economic environment, Lombardi said Dunkin’ needs to improve its consumer experience, from the look of the stores to the way customers are treated. And it appears Dunkin’ is trying to make some headway by stealing top human resources executives, including Christine Deputy from Starbucks, of course.

“Dunkin’ needs to step up on all levels and fire back at its competitors,’’ Lombardi said.