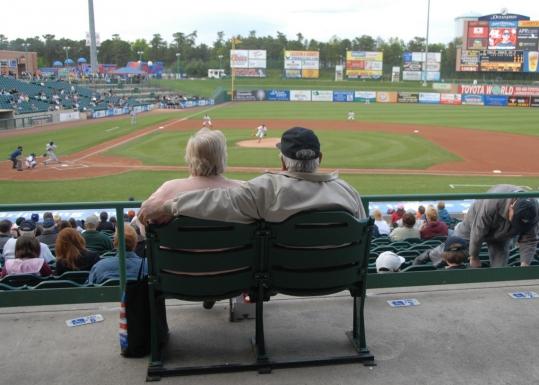 Children and seniors ate for free at a minor league baseball game in Lakewood, N.J., last month, as part of a season-long promotion to get families to come out to the ballgame. (Curt Hudson/Associated Press)
By Wayne Parry Associated Press / June 10, 2009
Text size – +

LAKEWOOD, N.J. - Some businesses are finding that the best price they can charge is nothing at all.

From minor league baseball teams letting kids eat free to banks making a $100 deposit into new checking accounts, merchants are realizing that giving recession-battered consumers something for nothing can be a good way to get them to buy something else.

The Nardini family of Toms River, N.J., took their four children to a Lakewood BlueClaws minor league baseball game one recent night, drawn by the promise of free food for the kids.

Ellianna, 8; Gianna, 6; Gemi, 4; and Talianna, 1, each walked away from the concession stand with a hot dog, a bag of potato chips, and a soda, on the house. That would have set their parents back $21.

The free food was the main reason the Nardinis decided to go to the game.

"It makes it affordable for a large family like ours," said Albert Nardini, a business consultant. "We've become very cost-conscious this year. We're cutting corners and pinching pennies and being careful how we spend our money."

The free food benefited the team, too. The Nardinis paid $32 for tickets and parking - in addition to whatever Albert and his wife, Kirsten, spent on food and drinks for themselves, or souvenirs for the kids.

That's an example of smart, effective marketing, according to Jean-Pierre Dube, a professor of marketing at the University of Chicago's Booth School of Business.

"You're essentially giving the person a deal, but not discounting the price of the main product," he said. "Very often the extra thing is less costly than the discount the firm would have had to make in order to get you to buy the original item."

It's not a new phenomenon. But it is being used to great effect during the current recession, he said.

"People tend to have a perception of 'free' that exceeds the true value of the product," he said. "The mere fact that you're getting something for free makes you happy."

The BlueClaws, a Philadelphia Phillies farm team, had allowed kids to eat free on Monday nights last year. This year, the deal was extended to every game all season.

And it's paying off. Geoff Brown, the BlueClaws' general manager, said the team had sold 20 percent more tickets through its first 17 home games this year than it had last year - something he attributes in large part to the food giveaway.

In Portland, Ore., Powell's Books turned to freebies to drum up more business during its normal afternoon lull in business. In May, anyone who spent $30 at the bookstore between 3 and 6 p.m. got a Powell's pint glass and a coupon for a $1.25 pint or 25 cent soda at the nearby Bridgeport Brewing Co.

Sutton said Powell's saw a great response although it hasn't tallied the promotion's direct impact on traffic or sales yet.

Even opening up a bank account can mean, well, money in the bank. Chase, Citibank, and PNC Bank recently ran promotions in which they would deposit up to $100 into a new checking account when customers sign up for direct deposit.

That's chump change compared with giveaways by condominium developers in Asheville, N.C., Philadelphia, and Jersey City, N.J. They're offering a free Smart Car with the purchase of units ranging from $550,000 to $2.1 million.

Some businesses have taken free too far and paid the price. Complimentary meals, drinks, hotel rooms, and entertainment at many Atlantic City casinos are down this year as the recession forces the gambling halls to pay closer attention to expenses. Total comps fell by nearly 5 percent last year, to $1.55 billion.