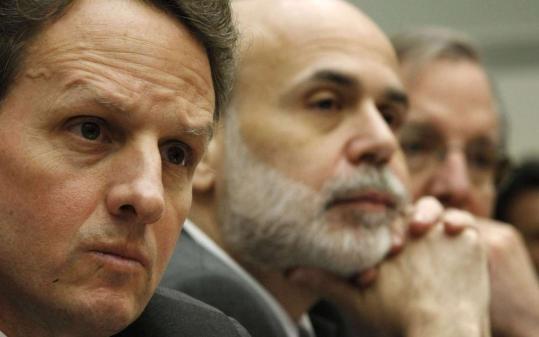 WASHINGTON - Pointing with dismay to the AIG debacle, the nation's top economic officials argued yesterday for unprecedented powers to regulate and even take over financial goliaths whose collapse could imperil the entire economy. President Obama agreed and said he hoped "it doesn't take too long to convince Congress."

"AIG highlights broad failures of our financial system," Geithner told the House Financial Services Committee. "We must ensure that our country never faces this situation again."

Geithner suggested his Treasury Department's powers be expanded. Bernanke was noncommittal, even suggesting the FDIC.

Both officials sought to channel the widespread public outrage over the millions of dollars AIG spent in post-bailout bonuses into support for regulatory overhaul.

Dealings between Congress and Geithner have been tense at best. But they were a little more relaxed in the afterglow of Monday's nearly 500-point surge in the Dow Jones industrials, though the Dow gave back almost 116 points yesterday. The rise came in large part in response to the administration's unveiling of a public-private program to buy up to $1 trillion in bad loans and toxic mortgage-related securities clogging bank balance sheets.

Geithner is expected to lay out more details on the plan tomorrow when he appears again before the committee. Democrats in the Senate say the administration wants the proposal on taking over nonbanks to move separately from the larger financial industry regulatory bill, to get it going more quickly.

At the White House, Obama told reporters, "We are already hard at work in putting forward a detailed proposal. We will work in consultation with members of Congress. That will be just one phase of a broader regulatory framework that we're going to have to put in place to prevent these kinds of crises from happening again."

Representative Barney Frank, a Massachusetts Democrat and the committee chairman, said, "When nonbank major financial institutions need to be put out of their misery, we need to give somebody the authority to do what the FDIC can do with banks."

The government has given AIG over $180 billion in bailout funds since it first intervened Sept. 16. The United States now owns nearly 80 percent of the insurer.

"If a federal agency had had such tools on Sept. 16, they could have been used to put AIG into conservatorship or receivership, unwind it slowly, protect policyholders and impose haircuts on creditors and counterparties as appropriate," Bernanke said.

AIG is a globally interconnected colossus, with 74 million customers and operations in more than 130 countries.

"Its failure could have resulted in a 1930s-style global financial and economic meltdown, with catastrophic implications for production, income, and jobs," Bernanke told the panel.

Meanwhile, The Wall Street Journal reported on its website late yesterday that a top candidate to run the government's bailout program, hedge fund manager Frank Brosens, had withdrawn from consideration.

The newspaper said Geithner was considering several other candidates for the job currently held by Bush administration holdover Neel Kashkari. Treasury officials refused to comment on the story.