Southwest to serve Logan by fall

Move could lower other carriers' fares 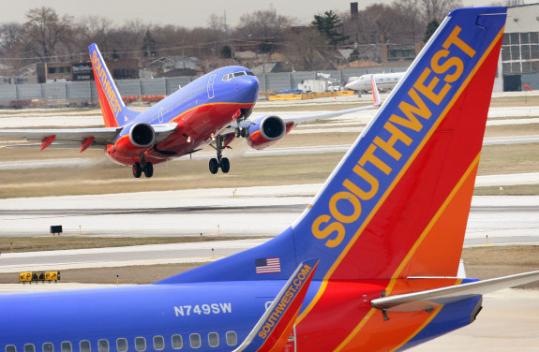 Low-cost carrier Southwest Airlines Co. said it plans to begin flying out of Logan International Airport by the fall, a long-awaited move that could drive down airfares for Boston passengers.

Chief executive Gary Kelly told The Globe the airline is planning "a conservative launch" with eight to 12 daily departures from Logan. He said Southwest probably will fly to just a couple of destinations initially, but the airline does not plan to unveil its new routes until the spring. Southwest's arrival in Boston, Kelly said, will result in 35 to 40 new jobs at the airport.

Southwest, which has been serving airports near Manchester, Providence, and Hartford since the late 1990s, has been eyeing Boston for years. But Kelly told the Globe last April that he didn't foresee that the airline would start service in Boston in 2009 because fuel prices were skyrocketing and the costs of operating at Logan were too high. However, Kelly said at the time that if another airline significantly reduced its Boston flights, Southwest could seize the "perfect opportunity."

Since then, several carriers, hammered by high fuel prices, have trimmed their schedules, leaving Logan with 311,478 domestic flights in 2008, down 6 percent compared with 2007. And at about $55 a barrel, fuel is about one-third the cost of what it was last year. But Kelly said the biggest reason Southwest decided to launch service from the Hub was that it is shifting some of its 539 planes from unpopular routes to markets that it hopes will be more profitable.

Kelly said the 27 daily nonstop departures from Manchester and 31 daily nonstop departures from Providence will still represent the majority of flights out of the region. But launching service in Boston, which will become Southwest's 67th destination, can be a smart move because the area is brimming with business travelers. Southwest, which said 40 to 45 percent of its passengers nationwide are business travelers, is hoping to draw more of them from the Boston area.

"We know that there are customers in the Boston area that we don't serve today, so this will be a very nice complement to our Providence and Manchester service," Kelly said.

Industry analysts say Southwest's move will also be good for travelers. Henry H. Harteveldt, principal airline analyst for Forrester Research Inc., said the arrival of Southwest is "a huge coup for Boston" and the city's travelers because wherever Southwest goes, lower airfares follow.

Patrick B. Moscaritolo, chief executive of the Greater Boston Convention & Visitors Bureau, said Southwest's arrival will benefit all Boston travelers, particularly business travelers. Last month, in an effort to get the airline to consider Boston service, Moscaritolo wrote a letter to Southwest pointing out that in 2008 four out of every 10 hotel occupied rooms on any given night in Boston and Cambridge were occupied by business travelers.

"I haven't heard back," Moscaritolo said. But now that the airline is coming to Boston, he said: "The sooner the better."

Southwest isn't the only carrier shaking up competition at Logan. Last week, Virgin America, another low-cost airline, debuted at Logan with nonstop service to both San Francisco and Los Angeles. Since Virgin America said in December that it would break into the Boston market, round-trip airfares for nonstop flights to San Francisco on competing carriers have plummeted 41 percent, from an average of $400 in December to $238 this month, according to Rick Seaney, chief executive of airfare comparison website FareCompare.com.

"You've got very strong competitors in there who will bring value back to Logan," Harteveldt said.

For now, it is unclear on what routes Southwest will compete. But industry analysts expect Southwest to go head-to-head with some of Logan's largest carriers.

"They've jumped pretty strong into Florida out of the Northeast," Kasper said.

A spokesman for JetBlue Airways Corp., the carrier with the most daily departures between Boston and Florida, declined to comment.

Ned Raynolds, spokesman for American Airlines Inc., Logan's largest carrier based on passengers served, said even if American faces competition from Southwest on its nonstop routes to the Miami, Chicago, and Washington, D.C., markets, "we'll continue to offer great service, a great schedule of domestic and international destinations, and competitive pricing in and out of Boston."