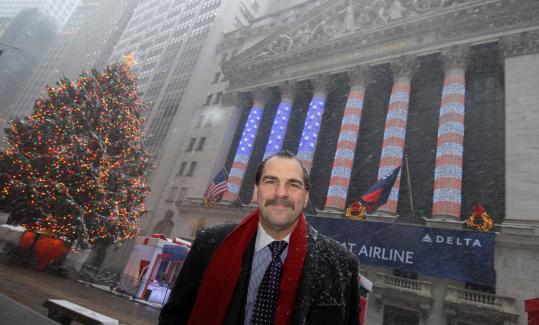 Rich Yamarone is an admitted optimist. A year ago, he forecast just a 15 percent chance that the United States would fall into recession in 2008. As late as the summer, he still believed the nation could avoid a full-blown recession.

Yamarone, director of economic research at Argus Research of New York, was wrong, of course, as 2008 turned out to be no year for optimism. Even pessimistic forecasts proved not pessimistic enough as financial markets crumbled, credit markets froze, home prices collapsed, oil prices soared, and battered US consumers finally gave up and nearly stopped spending.

"I didn't see it deteriorate," Yamarone conceded in a recent interview. A year ago, he said he thought consumer spending, which accounts for about 70 percent of US economic activity, would continue to grow. "I could not imagine that the economy could fall so sharply, so quickly."

The nation is now in the grip of what will almost certainly be the longest, if not the worst, recession since the end of World War II. Even optimists like Yamarone see little but bad news ahead for the US economy in 2009. Employers, who have slashed nearly 2 million jobs in the last year, are projected to cut at least that many more jobs in the next year, according to several economic forecasts.

The US unemployment rate, now at 6.7 percent, is forecast by many economists to rise above 8 percent - or even higher. IHS Global Insight, a Waltham forecasting firm, projects the jobless rate will hit 9.4 percent by the end of 2009, a level not seen since 1982, when unemployment hit a post-World War II high of nearly 11 percent.

In Massachusetts, the outlook is nearly as glum. The New England Economic Partnerships, a nonprofit research group, forecasts the state will lose nearly 80,000 jobs, or 2 percent of employment, over the next year. The state's unemployment rate, which rose to 5.9 percent in November, is forecast to reach 7.6 percent by the end of next year, and keep rising until peaking at 8.3 percent in mid-2010.

"It's pretty bad," said Alan Clayton-Matthews, a professor at the University of Massachusetts at Boston who prepared the state forecast. "By the beginning of next year, the economy will be declining sharply, and it's hard to see how things will turn out better than the forecast."

The worst will come in early 2009, analysts said. The economy has deteriorated rapidly over the past few months, and that downward momentum will continue through much of the first half of next year. Some analysts expect the economy to shrink at an annual rate of as much as 6 percent in the last quarter of this year, then at about a 4 percent pace in the first three months of 2009 before the decline flattens.

Even in the worst quarters of the last two recessions - 1990-91 and 2001 - the economy contracted at no more than a 3 percent annual rate.

The most optimistic forecasts don't see the economy beginning to grow again until the second half of next year. Unemployment will continue to rise at least until the end of the year, according to the forecasts.

"A lot of financial and economic damage has been done," said Scott Anderson, senior economist at Wells Fargo & Co. in Minneapolis. "We're now going to see declines in business investment and exports, and I don't see a rebound in consumer spending."

Such a gloomy picture was hard to imagine a year ago. The current recession began in housing, infected financial markets, and then spread into the broader economy. In many ways, the crisis in the financial system, particularly the disruption of the flow of credit, transformed what a year ago looked, at worst, like a short, mild recession into what will become the longest and possibly the deepest recession since World War II.

The current recession has already lasted a year, with the most optimistic projections calling for it to last 17 months. The longest postwar recessions, in 1973-75 and 1981-82, each lasted 16 months.

Normally, lower interest rates boost the economy by encouraging consumers and businesses to borrow and spend. The Federal Reserve has cut its benchmark interest rate to near zero, but the credit crunch has muted the impact as banks, worried about getting repaid and having enough cash to ride out the downturn, have been reluctant to lend at all.

Recently, President-elect Barack Obama suggested a stimulus package of nearly $800 billion that is likely to include money for tax cuts, public works projects, extended unemployment benefits, and other measures.

"One of the things that is going to help turn this around is this gigundo fiscal stimulus," said Nariman Behravesh, chief economist at IHS Global Insight. "This is going to be a horrible recession, but you could actually get a strong recovery."

Behravesh said other factors also are at work to help yank the economy out of its hole. Oil prices have collapsed, and the plunge in gasoline prices - from more than $4 a gallon to less than $2 - is the equivalent of a $250 billion tax cut for American families, Behravesh said.

The federal government's injection of hundreds billions of dollars into the banking industry under the financial rescue plan approved in the fall by Congress is beginning to free up credit, Behravesh said. Meanwhile, the Fed is taking a number of unconventional measures to get credit flowing and lower long-term interest rates, including buying securities backed by mortgages and other loans.

These and other Fed actions could lower 30-year mortgage rates to 4.5 percent, providing a boost to the housing market and spurring a wave of refinancing that would put more money in consumers' pockets.

Yamarone said he is still optimistic, although the next several months will be tough. More companies will fail. Layoffs will increase. US firms, he forecasts, will slice 2.7 million jobs in the next year.

But Yamarone, who has been laid off five times since he began working on Wall Street in 1985, said he expects the economy to bounce back. It always has.

"It's very difficult to be the candle in the hurricane, especially when the hurricane is still going," he said. "But I have full faith and confidence in the US economy and financial system."