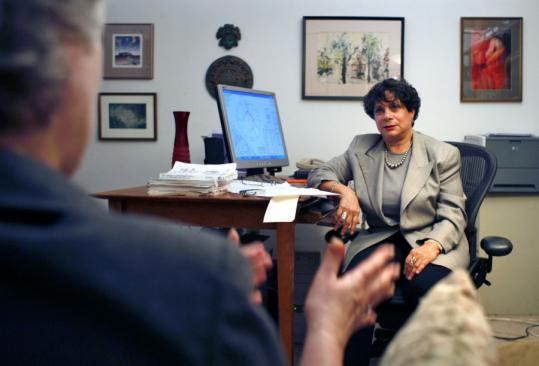 Astrologer Joyce Levin is fond of quoting financier J.P. Morgan, who has often been attributed as saying, "Millionaires don't consult astrologers, billionaires do."

Levin, a Cambridge-based modern stargazer, doesn't promise to make you rich, but she does tell the story of a couple who asked for some fortuitous gambling dates and then won thousands of dollars at the slot machines.

She says her clients come from all walks of life, from high-octane venture capitalists, renowned physicians, and attorneys taking lawsuits to trials, to expectant mothers, lovesick suitors, and pet owners.

As a practitioner in the "science and art of astrology," Levin says she combines "planetary influences with a keen intuitive sense," helping to heal relationships, encourage career changes, and even understand a child's behavior.

In an age of rational scientific thinking, it may seem odd that belief in studies such as astrology still exists.

But historically, it is during times of economic uncertainty and social anxiety that faith in the supernatural surges, with increased interest in practices such as astrology, ESP, and reincarnation.

With the popularity of TV shows such as "Lost," "Medium," and the latest network additions, "Eleventh Hour" and "Fringe," Levin says the new sophisticated audience of astrology seekers is no longer just the "ditsy female wanting to know about her love life." She gets phone calls about the stock market, housing slump, and unemployment trends.

Levin says she has accurately predicted past political events, such as the demise of Hillary Clinton's campaign and Barack Obama's victory. She admits these happenings were forecast by pundits and pollsters as well, but says her insight came from astrological readings. And, she also offers up a reading from the stars for 2009, which she also acknowledges isn't revolutionary but insists is tied to Mercury retrograde cycles and other orbits.

"There is no quick fix for the economy, but the cycles right now are more like the 1930s than they have ever been. In the next 15 years, we will see a taxpayer revolution, not led by the rich but from the middle class. The market will rally from here, but it will be more like a bear market rally than a longer-term uptrend. The price of oil is down again, but I think long-term, prices will rise."

An astrologer for over 30 years, Levin charges about $150 an hour for readings, which is more than just reading your sun sign. "People think astrology is like glancing at your horoscope in the paper or simply looking at whether Aries can get along with Leo and Sagittarius, but it's more complicated than that."

So, why am I calling you?
I don't know - I'm not a psychic, I'm an astrologer. I don't read minds; I help you develop your life potential, and make the best of easy and difficult times, based on what's happening with the planets.

Why would planets exert such a powerful pull on our lives?
There is a synchronicity that occurs at the moment of birth, and the time, day, and place of your birth is like a picture of your life's potential. It's like being intensively psychoanalyzed.

What can you tell me about myself, based on my birth date and place?
Well, you're a Cancer, so you must be happy, since you work from home, and this water sign is very much tied to the need for emotional and financial security. You also must be a good cook, and very nurturing to your family.

Well, you got it all right, except the good cook part, just ask my husband. How do you figure out all this?
In the so-called Dark Ages, we would use hand calculations, using certain kinds of predictive techniques, but now I have computer-driven text that looks at the sun, moon, and planetary placements and then analyzes your astrological identity.

What are some astrological "successes" that you've had?
A restaurant owner asked me if it was a good time to open a new venue, and I looked at his chart, and said, no, the timing didn't look right. Despite a lot of pressure, he decided against signing an agreement to open at a new mall, and today the site of the proposed venture is still undeveloped. In another case, an interracial engaged couple came to me and wanted to know if they were a good match, since their parents were giving them a lot of trouble. Their charts looked great, and they decided to get married, and years later, they are still happily together.

How do you help a woman who wants to meet that tall, dark, handsome stranger?
I often see people who are repeating negative patterns in relationships, attracting the same type of person over and over again. I help them understand why they're encountering difficulties, as well as the deeper issues involved, and how to change for the better.

What about astrology for pets?
Pets have personalities as well. I can tell pet owners when it's a good time to get another pet or if a pet will be compatible or not. I've done cats, dogs, and even horses. No one has ever called about a gerbil yet, but who knows, it could happen.

Do some people think you're a crackpot?
Sure, of course. I had one man who wouldn't come near me, but then he read some things I wrote, based on the economy and long-term trends, and now he calls me all the time.