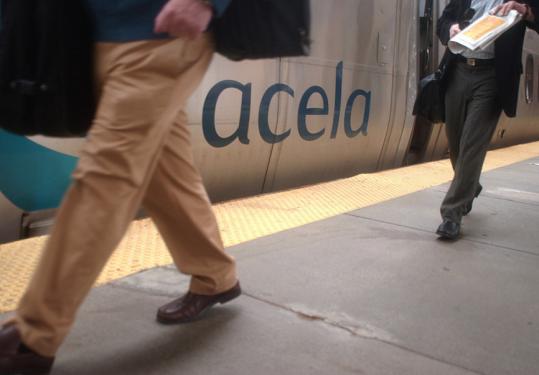 Passengers get off the Acela at South Station. Demand for tickets on the high-speed trains between Washington and Boston has increased. (The Boston Globe/File 2007)
By Bloomberg News / August 27, 2008
Text size – +

WASHINGTON - Amtrak may add cars to its Acela, the fastest US passenger train, and raise fares as riders fill coaches on the Washington-to-Boston route, chief executive officer Alexander Kummant said.

Demand for the high-speed service also may spur Amtrak to levy a surcharge to help buy additional equipment, Kummant said in an interview at the Washington headquarters of the national passenger railroad.

"We're out of capacity," said Kummant. "Most people know that's a pretty tough ticket" because seats are hard to find except at "way-off-peak" times.

The Acela's top speed of 150 miles per hour is drawing travelers who want to avoid rising airfares and highway congestion in the Northeast. Acela ridership climbed 7.7 percent in the first 10 months of fiscal 2008, part of Amtrak's 11 percent gain.

Amtrak started Acela service in December 2000. Each train consists of two locomotives and six passenger cars, and can make the trip between New York and Washington in 2 hours, 28 minutes.

Amtrak would consider lengthening the Acela by adding "a couple additional cars" to the trains, Kummant said, a process he said would come "with difficulty."

The trains now run with an engine at each end. While that step speeds turnarounds when the Acela finishes its route and then reverses direction, reconfiguring trains to add coaches would be "very difficult and very time consuming," spokeswoman Karina Romero said. Amtrak also doesn't have any spare Acela passenger cars, so extending the trains would require buying more custom-built coaches, she said.

The trains are made by Bombardier Inc. and Alstom SA. Amtrak can operate its full Acela schedule of 32 weekday departures with as many as two of its 20 trains out of service, Romero said.

Revenue from Acela fares was $403.5 million, or 27 percent of Amtrak's ticket sales. Acela tickets can be more than twice as expensive as those for slower, so-called regional trains between Washington and New York.

Amtrak adjusts prices much like airlines do, trying to match fares to supply and demand, Kummant said.

Trains are "running full and the demand is there," said David R. Johnson, deputy director of the National Association of Railroad Passengers consumer group. "They have been under pressure to act like a business, and this is how private business acts."

Higher fares alone wouldn't produce enough money to expand the Acela, for which Amtrak agreed to pay $800 million in 1996 for 20 trains and maintenance. Such a step would require more funding for Amtrak, a "political football" that has struggled for aid in President Bush's administration, said Kummant.