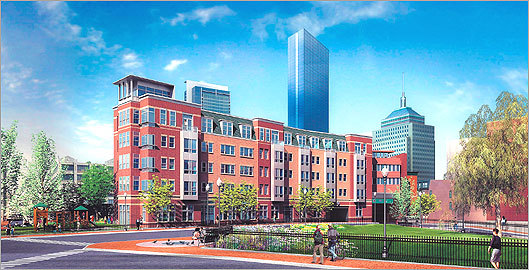 A rendering of the planned Columbus Center.

The owners of the massive Columbus Center project over the Massachusetts Turnpike have gone back to city and state officials to request as much as $40 million in public funding to try to resurrect one of Boston's most ambitious developments.

A spokesman for WinnDevelopment and its partners confirmed the Columbus team has held a series of meetings to push for additional taxpayer assistance, despite lingering controversy over public funds that have already been awarded. Officials briefed on the talks said the ownership has discussed the idea of creating a special development zone that would give developers tax relief to pay for a deck over the turnpike and other upgrades.

Columbus Center is intended to be a $800 million hotel, residential, and retail complex that would straddle the turnpike and reunite two neighborhoods now divided by the highway. It would occupy four blocks between Clarendon and Tremont streets where the South End borders Back Bay.

Construction of the long-planned project was halted abruptly in March after develop ers were unable to secure construction financing and about $35 million in state assistance. They now face an uphill battle to keep the project alive as capital markets have tightened and costs for fuel and building materials have soared. They have already sought to delay construction up to 18 months.

Alan Eisner, a spokesman for the developers, said executives have been negotiating for months to try to revive Columbus Center, which went through 11 years of permitting and neighborhood opposition. Projects costs have nearly tripled. He confirmed that officials met last week with state Senator Dianne Wilkerson, a Roxbury Democrat, to discuss ways to generate fresh public assistance.

"We've been meeting with various state and city officials to try to see what support is out there that can jumpstart the project once market conditions improve," said Eisner. "Anything and everything is on the table."

Eisner would not discuss specific proposals, but officials briefed on the talks, who were not authorized to comment on them publicly, said Columbus Center's owners have asked the city and state to consider designating the project a special development zone.

The arrangement, known as a District Improvement Financing agreement, allows developers to get an abatement on a portion of their future property tax bill now to pay for infrastructure upgrades.

Wilkerson did not return phone calls seeking comment. She has been a key supporter of Columbus Center on Beacon Hill, where a number of foes, including House Speaker Salvatore DiMasi and Representative Martha Walz, a Back Bay Democrat, have fiercely opposed public funding for the project under the belief that the state should not be footing the bill for a private development.

WinnDevelopment is Columbus Center's managing partner in an ownership group that includes the California Public Employees Retirement System and MacFarlane Urban Realty Co. LLC, which invests in large urban projects nationwide. In 2007, construction financing fell through, delaying the project and raising questions about its viability. As a result, the state withdrew $20 million in potential job-creation grants, and the project never received $15 million in loans from MassHousing.

The prospect of a new tax relief plan drew contrasting reactions from the community.

"This is a great project to knit the city back together and it is critical to get some assistance for it," said David I. Begelfer, chief executive of the National Association of Industrial and Office Properties of Massachusetts, a business advocacy group that supports development incentives. "It does not have to be dead. If the developers can get a couple of years of breathing room, I wouldn't be surprised to see it back on the front burner."

But Walz said the project's survival should not be the public's responsibility. "This is another instance of the developer seeking relief from its financing problems with taxpayer money," she said. "It's not appropriate for taxpayers to be financing this project, and we've made that point to the developer time and again."

Overall, the public assistance being sought by the Columbus team is a small portion of the project's overall cost, but developers have made clear that the money is a crucial in tough economic times. Eisner said the project would produce public benefits, including four new parks, improvements to air quality in the MBTA's Back Bay Station, and better groundwater management in nearby neighborhoods that have struggled with flooding.

The City of Boston provided initial support for the project, including a package of tax deferrals, but officials said the city would be reluctant to grant further taxpayer assistance.

"We [will not] consider district improvement financing for this project," said Susan Elsbree, a spokeswoman for the Boston Redevelopment Authority, the city's planning arm. "The city has already given [tax incentives] valued at $14 million over the life of the project."

The developers are also trying to renegotiate a lease with the Massachusetts Turnpike Authority to allow for a construction delay of up to 18 months; the authority owns the space above the highway where the complex will be built. Mac Daniel, a turnpike spokesman, said the talks continue as it works with the developers to clean up the area surrounding the inactive construction zone.