THIS STORY HAS BEEN FORMATTED FOR EASY PRINTING
Pro Shop

On the trail of a good recreational bike 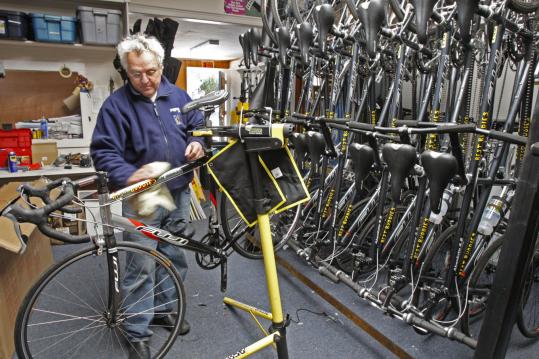 But what bike should you get? There are road bikes, racing bikes, mountain bikes, hybrids, recumbent bikes, and even bikes that fold up. The price for a new bike starts around $100 and soars into the thousands. A used bike can cost as little as $20.

When choosing a bike, put some time and energy and as much money as you can afford into the purchase, experts advise. "The thing that can stop a person from being a really good recreational bike rider is getting the wrong equipment or wrong advice, and you end up having a disappointing time," says Bill Sykes of Plymouth, who organizes charity bike rides for the developmental disabilities organization Best Buddies International. "You want to make sure you get something good."

Shane Jordan, director of education and outreach for the Massachusetts Bicycle Coalition, also advises making sure to purchase a bike that's right for you.

"You want to get a bike that is comfortable and that you enjoy using," says Jordan.

The first consideration in buying a bike is how you will use it. If you like riding on trails, you'll want a mountain bike. If you're preparing for a 100-mile charity ride, a road bike is best. For shorter trips, a hybrid might be for you.

Mountain bikes are sturdy and heavy and have tires that grip. Road bikes are lightweight with a raised seat and curved handlebars. Hybrids are sturdier than a road bike, lighter than a mountain bike, and have straight handlebars and upright seating.

"Most people who use hybrids are going to do the bike-path thing, maybe ride to the store," says Sykes, who also organizes competitive races and occasionally races himself. "They're probably not going to do 50 miles on a hybrid."

Recumbent bikes, which allow the rider to lean back comfortably, are good for long rides on the open road but less handy in the city. "They're low to the ground so you can't see very well," says Jordan.

And there are folding bikes, which are convenient if your trips include public transportation.

Jordan recommends taking a bike for a spin before you buy, if you can. Most bike shops let you ride around the parking lot, or at least sit on it in the store. "You want to get a bike that fits you," Jordan says.

Approach your bike shopping with a plan, advises Sykes. "Do a little bit of research prior to going in - maybe on the Internet or some of the cycling magazines. Shop a little bit," he says.

The Boston area has lots of bike shops, staffed by knowledgeable people. Department and sporting-goods stores also sell bikes, but their staff may not be as well-versed in the ways of cycling, according to Jordan and Sykes.

Jordan also says that you should think about how you'll look on your new bike. "If you like the way you feel on a bike, you're going to use it more," he says.

n Don't forget your helmet. When you get a bike, get a good helmet too, unless you already have one that's relatively new and hasn't been in a crash. Make sure it fits comfortably. Reflectors on the front and back are required in Massachusetts if you ride at night.

n Bike clothing optional. A good pair of bike shorts and some bike shoes will make your ride more comfortable, according to Sykes. Jordan says not to worry about fancy bike wear. "Just tuck one pant leg up and go," he says.

n Money well spent. A good bike is expensive, but if you are using it instead of a car, it will pay for itself in a short time. A good bike will last decades. "There are some bikes from the 1800s still being ridden," says Jordan.

n Moving on up. Don't start with a $5,000 bike, but don't be afraid to trade up as you get into the sport. "When people get into it and the more they're riding, the more they are going to spend on higher performing bikes," Sykes says.