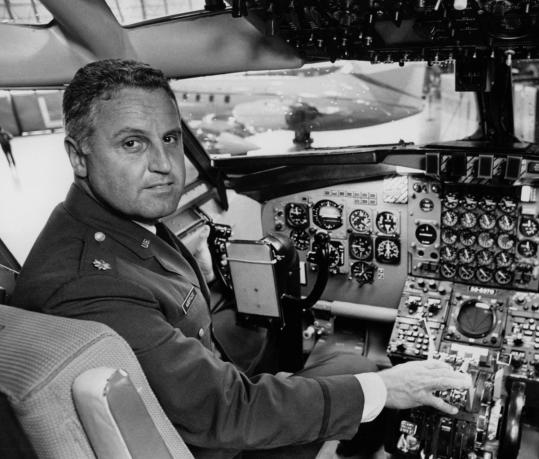 MARTINSBURG, W.Va. - Ralph D. Albertazzie, a retired Air Force colonel who piloted Air Force One for President Nixon and flew Henry Kissinger on a historic secret mission to begin talks with China, has died at his home in Falling Waters, W.Va. He was 88.

Brown Funeral Home in Martinsburg said yesterday that no service will be held. The family will mourn privately and honor Colonel Albertazzie’s request that his ashes be spread over the hills of West Virginia.

Colonel Albertazzie grew up as the son of a coal mine superintendent in Cassville, a small rural community in northern West Virginia, and said in a 2003 interview that he had hitchhiked to an airport near Morgantown and washed planes in exchange for flying lessons.

He graduated from Morgantown High School and attended West Virginia University on a football scholarship, but quit to enlist in the Army Air Corps during World War II.

He also served in Korea and Vietnam, flying 17 combat missions and 75 combat support missions in Vietnam. He earned the Bronze Star and two Air Medals.

Colonel Albertazzie was assigned to pilot Air Force One around the time of Nixon’s inauguration and was at the controls as Kissinger and Nixon made several trips to begin normalized relations with China.

After Nixon resigned in disgrace in August 1974, Colonel Albertazzie flew him for the last time, home to California.

In a 1998 interview, Colonel Albertazzie said he flew Nixon a total of about 275,000 miles. He also said he flew former presidents Eisenhower, Lyndon B. Johnson, Ford, Truman, and Hoover during his career.

Colonel Albertazzie wrote two books inspired by his years flying the president in a 707 known as the “Spirit of ’76,’’ the novel “Hostage One’’ and the nonfiction book “The Flying White House: The Story of Air Force One.’’

After leaving the military in 1974, Colonel Albertazzie served as West Virginia’s commerce commissioner under Governor Arch Moore, a Republican. He ran for governor in 1976, but lost in the Republican primary.

Colonel Albertazzie returned to the Eastern Panhandle to open a truck stop along Interstate 81 and owned a Martinsburg television station in the 1990s.

Colonel Albertazzie was married to his high school sweetheart, Carol Jean Wilson, for 57 years until she died.