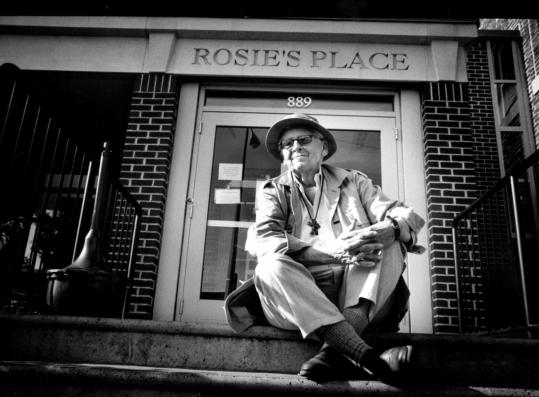 Kip Tiernan, who founded Rosie’s Place, the nation’s first shelter for homeless women, and whose persistent, raspy voice echoed from the streets to the State House as she advocated for the poor, died of cancer Saturday in her South End apartment.

Usually clad in a canvas hat and work pants, a cross and a skate key dangling from a leather strap around her neck, Ms. Tiernan helped create an A-to-Z of agencies that assist the disadvantaged in Massachusetts. By example, she also inspired so many people to try to ease suffering that, directly or indirectly, she may have touched more lives of the poor in the Commonwealth than anyone else in the past four decades.

“Every day of her life she lived for social justice, and the lives she saved were untold,’’ Mayor Thomas M. Menino said. “She always said that someday we will stamp out homelessness, but until that day we have to make sure everyone understands that a homeless person could be one of us. She was a very special person, and there’s a big hole in our lives today because Kip’s not here. This nation is going to miss Kip Tiernan because of her fight for social justice.’’

Along with Fran Froehlich, her partner in advocacy for more than 35 years, Ms. Tiernan founded, helped found, or was a founding member of a number of agencies and panels, including Boston Health Care for the Homeless, Boston Food Bank, Community Works, Aid to Incarcerated Mothers, Finex House, Food for Free, John Leary House, My Sister’s Place, Transition House, the Greater Boston Union of the Homeless, and Boston’s Emergency Shelter Commission.

The range of suffering was such that “sometimes you think there aren’t any tears left,’’ Ms. Tiernan told the Globe in 1988, “and you find yourself sobbing.’’

Strong words were her response more often than tears, however. Drawn by faith to her calling, she brought unconditional love to each encounter with the homeless, and she didn’t hesitate to criticize the powerful if they backed what she believed were unfair policies or tried to slide by with words of pity.

The cross she wore was more than a symbol.

“A rooted woman, Kip always wears that cross,’’ Globe op-ed columnist James Carroll wrote in 1996, “which marks her not for piety or for a religion of easy answers, but for being, in her words, ‘an angry daughter of Christ. . . . I find that the cross of Jesus is the radical condemnation of an unjust world. You have to stay with the one crucified or stand with the crucifiers.’ ’’

Sue Marsh, executive director of Rosie’s Place, said in a statement that she was “so sorry to be saying goodbye to a good friend of mine. . . . She has been the fiery, feisty, and beloved touchstone for the mission and vision of Rosie’s Place, a compassionate friend to every woman in need.’’

On behalf of housing, health care, and an array of social justice issues, Ms. Tiernan lobbied, fasted, marched in protest, and was arrested during sit-ins at government offices. In November 1990, she began a fast in Arlington Street Church and explained why in an op-ed essay for the Globe.

“We should atone for what we have allowed to happen to all poor people in this state, in the name of fiscal austerity or plain mean-spiritedness. . . . We have, as citizens, much to repent for, for what we have and have not done, to ease the suffering of our sisters and brothers who have no lobby to protect them.’’

Before founding Rosie’s Place in 1974, Ms. Tiernan traveled to meet with legendary Catholic activist Dorothy Day, from whose life she drew inspiration and spiritual sustenance for the decades that lay ahead.

Beth Healy, a Globe reporter who is writing a biography of Ms. Tiernan, said: “She had this soft spot in her heart for broken people, whether they were sick or mentally ill or struggling with addiction. Kip would hug a person dying of AIDS back in the 1980s when everyone else was running away. She would talk to someone living on the streets that no one else would talk to.’’

Ms. Tiernan, Froehlich said, combined compassion with “a pragmatic approach to solving issues, like: Hungry? Food. Homeless? Housing. And she challenged people with that clarity.’’

Though Ms. Tiernan asked “hard questions, at the same time, I was always impressed that she embraced people of all persuasions because she wanted them to see what she saw,’’ Froehlich said. “And I mean really embraced them. She would hold somebody’s hand while they were disagreeing with her. She really wanted you to join her in this pursuit of justice for people who have nothing.’’

Born in West Haven, Conn., Ms. Tiernan was 6 months old when her father died and 11 when her mother died. Raised by her maternal grandmother, she learned during the Great Depression to help others.

“Her grandmother always had soup or stew on the stove,’’ Froehlich said, “and when people came to the house who were down on their luck, she always had bowls of soup or stew ready for them.’’

By her teens, she was learning to fly a plane and play jazz piano. She also was expelled from a Catholic boarding school, telling the Globe she had failed math and asked too many difficult moral questions.

She worked as a newspaper reporter and moved to Boston in 1947 to attend the Boston Conservatory on a scholarship, only to be expelled for drinking. “I was raped once,’’ she told the Globe in 1988. “I was 19. Drunk.’’

Speaking of the women she served at Rosie’s Place, she added: “I’ll tell you one thing. It helps me identify with what some of these women have been through.’’

Ms. Tiernan joined Alcoholics Anonymous, learned from recovering street drunks how to stay sober, and became a successful advertising copywriter with her own agency. In 1968, she did some free work for priests who had invited activist Daniel Berrigan to speak at a church.

Listening to him, she later recalled, it was as if a voice inside her head said, “I have just passed through a door, and there is no going back.’’

Leaving the affluence of her advertising life, she moved into Warwick House, an urban ministry center in Roxbury. Using her copywriter’s facility with language, she became one of Boston’s most quotable advocates for the poor, coining phrases such as “from the Great Society to the Grate Society.’’

A service will be announced for Ms. Tiernan, whose longtime companion of decades, Edith Nicholson, died in the 1990s.

Ms. Tiernan helped raise Nicholson’s three children and leaves one of those children, Peg Wright of Saugerties, N.Y.; seven grandchildren; and three great-grandchildren. For the past 15 years, Ms. Tiernan and Donna Pomponio have been a couple. They married in 2004.

“The tragedies in the world continued to propel her to fix things and make them better,’’ Pomponio said of Ms. Tiernan. “She knew that as human beings, we could do better for each other. There was a support and strength that came from that woman, and having her by your side and in your life, you knew that you could do it, too.’’