Kris Kono, at 46; brought warmth, energy to many as DJ, therapist 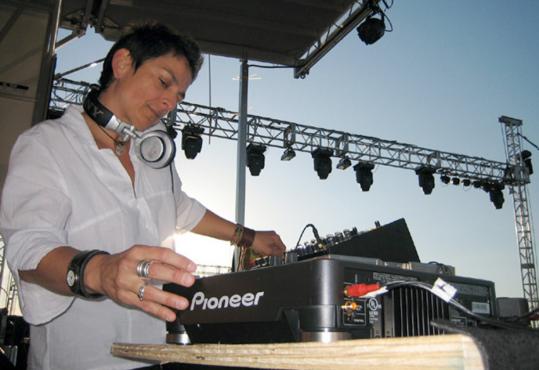 Surrounded by the tools of the deejay trade, Kris Kono offered an invitation to dance and hundreds said yes, moving with joyous abandon to songs she melded so smoothly it was as if one measureless melody cascaded from the speakers.

“It was like a journey,’’ said her friend Lucy Zamgochian, in whose New Britain, Conn., basement Ms. Kono refined her talent at the end of the 1980s, after the two converted the space into a makeshift after-hours club. “It would start slowly, very mild, and the beats would get harder and harder and Kris would take you up the mountain, and you would be way up at the top, sweating, screaming, and then she would take you slowly back down.’’

Never immune to the magic she spun, Ms. Kono “would be dancing and singing in the deejay booth,’’ Zamgochian said. “She just loved it.’’

A physical therapist by day who could soothe injuries as surely as she inspired clubgoers from Boston to Atlanta and Montreal, Ms. Kono died last Monday in Brigham and Women’s Hospital of complications from cancer. She was 46 and lived in Roslindale.

“Both her day life and night life were formed by bringing joy and healing to people, and I think she saw music equally as a vehicle for healing,’’ said Kristen Porter, founder of Boston-based Dyke Night Productions.

Since the mid-1990s, the two worked together and Ms. Kono provided music for dozens of fund-raisers benefiting, among others, a children’s theater group and organizations that assist battered women or aging members of the lesbian, gay, bisexual, and transgender communities.

“I think one of the most wonderful things about Kris was her ability to bring so many diverse groups of people together through the love of music or through how music speaks to people,’’ Porter said. “Kris’s fan base was young and old, gay and straight, black and white. I don’t think, in 14 years, I ever met anyone who didn’t like Kris. She was exceptionally kind to everyone.’’

As dedicated to her physical therapy patients as they were to her, Ms. Kono was a supervisor at an outpatient clinic run by New England Baptist Hospital. Previously she was on the staff of the health center at her alma mater, the University of Connecticut in Storrs.

“Whether she was working with people in pain or playing music, she always liked to help people,’’ said her mother, Helen (Xanthopoulos) of Natick. As the illness made getting to work more difficult, she added, “the support New England Baptist showed her was so immense.’’

The older of two daughters, Kristine Kono grew up in Rocky Hill, Conn., where she graduated from Rocky Hill High School and was a top tennis athlete, a sport she played on the Division 1 level at UConn.

Traveling with her father, Lee, in the 1980s from their home to the nightclub he ran in nearby Hartford, Ms. Kono caught a glimpse of her future in the deejay booth.

“I remember standing at the edge of the dance floor completely fascinated by the deejay seamlessly blending two songs together. I said to myself, ‘I must learn how to do that.’ ’’ she told www.lesbiannightlife.com.

Once she did, her father, who died several years ago, let her deejay occasionally in his nightclub.

“She was in high school,’’ her mother said, “and you could see her soul was spinning.’’

She spun in Provincetown, in Miami’s South Beach, and at pride parades in New York City, where she seemed to know just what music to play as the float upon which she rode rolled into each ethnic neighborhood.

“Nothing made her happier than being at Machine until 2 in the morning with 800 girls dancing and singing and jumping up and down, and it was all because Kris was there creating a great, fun, happy environment,’’ said Beth Healy, a Globe reporter who was Ms. Kono’s partner.

“Sometimes she would record her evenings at clubs and make CDs out of them,’’ said Healy, who lived with Ms. Kono in Roslindale. “And she was so generous that if she ran into someone who said, ‘I really enjoyed the night,’ she would give them a CD, so they could have the songs.’’

Some may have stopped to talk with Ms. Kono simply because of her smile, which was warm, inviting, and as much a trademark as the music she played.

“When you met Kris,’’ Zamgochian said, “there was always that smile and a hug. You always got that.’’

A few years ago, Ms. Kono started also deejaying for Boston Housemusic Coalition, and was as at ease in a realm dominated by men as she was hosting lesbian events.

“She was intense, but still having fun at the same time,’’ said Bob Diesel, a deejay who also does booking and is a publicist for the coalition. “It was like this big controlled energy being released, like water from a faucet. And she had that smile, a very pleased smile. She knew she was blessed to be able to do what she did. Some people just do this, get paid, and go home, but she knew she was blessed.’’

Among the many tributes posted on Ms. Kono’s Facebook, one friend wrote: “They say the best cure for grief is motion, and Kris, you moved people better than anyone. Rest in peace, friend. Or shake things up up there.’’

In addition to her mother and Healy, Ms. Kono leaves a sister, Diana of Natick.

A memorial service will be held at 6:30 p.m. today in the Arnold Arboretum in Jamaica Plain, one of Ms. Kono’s favorite places, and where she took Prana, her Italian greyhound, to run.

Little more than a year ago, Ms. Kono was diagnosed with what is sometimes called uncertain primary cancer, which can complicate treatment because its origin cannot be determined.

Though this uncertainty layered emotional and medical complications onto arduous treatment, Ms. Kono greeted each day as if the sun was shining and an endless future was unfolding anew.

“She was amazing,’’ Healy said. “We all talk about being present or trying to be positive. For most of us, or at least for me, it’s a lot of work. For Kris, it was natural.’’ A few weeks ago, Healy recalled, when Ms. Kono was using a cane, “she left me a note saying, ‘It’s going to be a great day, I can feel it. Love, Kris.’ ’’

Indeed, at a moment that consumes many with sorrow or anger, Ms. Kono felt gratitude.