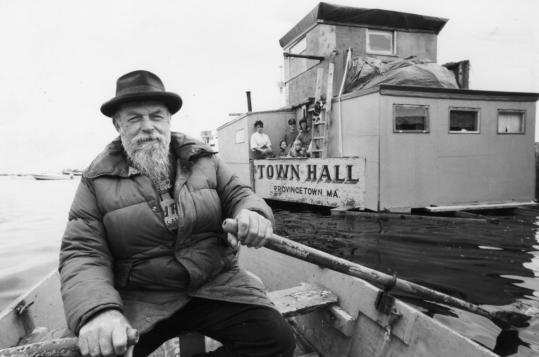 David Pearlman rowed to his houseboat in Provincetown in 1990. In 1996, Mr. Pearlman, Betsy Terrell, and their daughter Jessica anchored on a mudflat in South Portland, Maine (below). The raft-house was made from scraps scavenged in New York. (Stephen Rose for The Boston Globe)
By Bryan Marquard Globe Staff / February 2, 2011

As much as any place could be home to someone joyously and uncompromisingly nomadic, Provincetown was David Pearlman’s residence intermittently in the late 1980s and early ’90s.

Living on a makeshift paddle-wheel houseboat anchored in the harbor, he played guitar and performed on the streets with his wife and children for dollars and coins the tourists tossed. Some local officials thought the floating home was an eyesore, however, and wanted it gone.

“American society has killed a dimension of life, the possibility of living outside the mainstream with dignity,’’ Mr. Pearlman told the Globe in June 1990 during one dust-up with authorities.

Sailing out of the mainstream and into the history books, he crossed the Atlantic six years later on another hybrid raft-house, this one cobbled from scraps scavenged on the streets of New York City. Of late he was back in New England and planned to sail his latest raft around the world, only to be hauled to safety in November when a storm smashed it against icy cliffs along Lake Champlain in Vermont.

Weakened by cardiac ailments, Mr. Pearlman then drove to New Orleans to be close to family and died in University Hospital of heart failure on Jan. 23, two days after his arrival. He was 77.

“He was always going full speed ahead, and I think his spirit just wore his body out,’’ said his daughter Ingrid Lucia Marshall of New Orleans. “He couldn’t take the time to take care of himself the way he should have because he was too busy creating.’’

Mr. Pearlman’s greatest voyage was his life, rather than the raft trips he took across the Atlantic and down the Mississippi River that inspired a book, a profile in The New Yorker, a documentary film, and decades of newspaper articles.

Adopting the name “Poppa Neutrino,’’ he filled his years with an improbable assortment of jobs, passions, and pursuits.

“He is profoundly responsive to impulse,’’ wrote Alec Wilkinson of The New Yorker, who expanded a magazine profile into the 2007 book “The Happiest Man in the World.’’

By the time Mr. Pearlman was 20, he had earned his keep as a gambler, served two underage years in the Army, and worked in a mine, a mattress factory, and for the Montana Highway Department. Then, he enrolled in a Baptist seminary and became an assistant pastor in Texas.

“I felt like I’d found my place and, if not strictly my vocation, at least my calling,’’ he told Wilkinson.

“Neutrino’s past is lavish and prodigal, and it does not easily compress,’’ wrote Wilkinson, who struggled to contain it between the covers of a book. He added a few pages later: “His past is one long poem to the random life.’’

With Eileen Cahill he had a daughter, Mandy, who died in 1998, and a son, Cahill, who lives in San Francisco. With Maxine Goldstein he had Ingrid, and with Betsy Terrell he had Jessica, of Long Beach, Calif. He also helped raise Betsy’s daughter Marisa, of Damariscotta, Maine, and two others he considered stepchildren: Esther Armstrong of Eastham and Todd Londagin of Peekskill, N.Y.

At different junctures, he and his family lived in San Francisco, Mexico, New Orleans, Provincetown, on tour playing music in Europe, and at various points in between. The family performed as the Flying Neutrinos, a New Orleans-influenced jazz band that became more successful when Ingrid and Todd became its leaders, bringing it to venues that included some in and around Boston.

“It was the ultimate adventure,’’ Jessica said. “For those of us in the family who turned out to be musicians or writers, I don’t think we could imagine a different way of growing up. It was painful at times and incredibly joyous at times, but the stories and the memories we have from the road, I don’t think there’s another childhood that could have matched them.’’

Said Ingrid: “I had nothing but love for him. I can’t think of a better person to have raised us.’’

Soon after William David Pearlman was born, his own father shipped out to sea and disappeared. To support herself and her son, his mother gambled. They moved often around San Francisco, scarcity of money dictating their direction.

As a boy, Mr. Pearlman chanced upon a documentary about aborigines who were nomadic and had no use for material attachments.

“I was only 12, but when I left that movie theater I said, ‘That’s the way I want to live, I never want anything more,’ ’’ he told Wilkinson.

“The idea of freedom became paramount to me. Remaining free to move, free to plan or not plan, free to have an adventure, free to explore an idea or intuition . . . Nothing else mattered.’’

He created his own approach to philosophy and contemplated starting a church. Though he had little use for conventional activities such as football, he also once invented something he dubbed the Neutrino Clock Offense, in which the quarterback and a receiver communicate through direction signals based on the numbers on the face of a clock. At least one college coach found it revolutionary, if difficult to implement.

“When I was a child, I had an intuitive knowledge that human life was 99 percent defeat, and that you had to do something extraordinary to turn it into victory,’’ Mr. Pearlman told Wilkinson.

Mr. Pearlman’s family plans to hold a musical send-off at 11 a.m. on Feb. 19, in a procession from Louis Armstrong Park in New Orleans to the Mississippi River. There, his children will launch his ashes on the waters flowing into the Gulf of Mexico and the seas upon which he floated and dreamed.

“The greatest feelings that I have in my life are when I have nothing,’’ he told Wilkinson. “When I’m absolutely broke, I feel liberated.’’

His family said he died with $4.44 in his bank account, an estate for a life as stubbornly bereft of material success as it was rich in experience.

“We never had any money,’’ Jessica said. “We had no possessions. I remember being a child and having him wrap blue tarp around my feet with a rubber band and being mortified.’’

Instead of shoes, she said, Mr. Pearlman dispensed life lessons.

“The gift he gave us was a childhood that had nothing and everything,’’ Jessica said. “We knew that nothing was everything we needed. And the gift that gave us was that we can go after anything we want, go after our wildest desires, and no matter what happens we’re going to land on our feet, because you can go walking down the road with blue tarp on your feet and you’ll be fine.’’