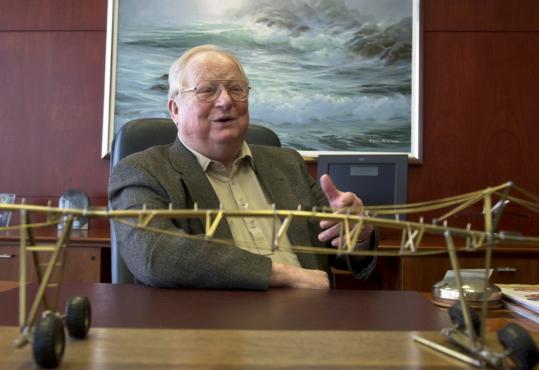 WASHINGTON — Robert Daugherty, a Nebraska manufacturer who reshaped the landscape of rural America by pioneering the use of mechanized center-pivot irrigation systems that watered fields in a circular pattern, died Nov. 24 at his home in Omaha. He was 88 and had recently been hospitalized for an infection.

Mr. Daugherty began his career in the 1940s as part owner of a machine shop that built farm implements in a simple steel shed. By the time he retired as chairman in 1996, his company, now called , was doing more than $550 million in business a year.

His chief breakthrough occurred in the 1960s, when he developed an efficient way to manufacture the revolutionary center-pivot system. Previously, crops were grown on dry land or were irrigated by labor-intensive gravity systems, with hand-laid metal pipe carrying water vast distances along the ground.

The self-propelled center-pivot system, which was invented by a Nebraska-born farmer, allowed water to be sprinkled on crops from an overhead pipe rotating around a centrally placed well. The new irrigation system altered the appearance of much of the nation’s farmland. As seen from above, the landscape changed from a rectangular grid of fields to a patchwork of green circles dotting the Great Plains.

The center pivot also had an immense impact on agriculture by expanding irrigation to arid land that had not been able to support crops in the past. But as the production of corn, soybeans, alfalfa, and other crops rose dramatically, conservationists questioned whether center pivots might cause the depletion of underground aquifers. Extended droughts led to moratoriums on the installation of center-pivot systems in several states.

According to Mr. Daugherty’s company, 42 percent of all irrigated farmland in the United States is watered by center pivots. In some western states, it is almost 75 percent.

Nevertheless, the center pivot was hardly an immediate success. In 1949, Frank Zybach, then farming in Colorado, filed for a patent on a “self-propelled sprinkling irrigation apparatus.’’ After he returned to his native Nebraska in the early 1950s, Zybach and his brother-in-law built a few of the irrigation systems.

In 1954, Mr. Daugherty’s company, originally called Valley Manufacturing, bought the production rights from Zybach and became the first large-scale builder of the center pivot. It took years of failed experiments before an economical way to make the unwieldy system was found.

In one early demonstration, Mr. Daugherty stalked through a cornfield, making repairs on the go and pushing his mechanism along when it stalled or got stuck in mud.

“It seemed like the problems were monumental,’’ Mr. Daugherty told the Omaha World-Herald in 1996. “It took us about 10 years to get this thing going.’’

One of his biggest hurdles was finding a steady supply of 6-inch-wide steel pipe to carry water as much as half a mile from a central well. His solution was to make his own.

By the mid-1960s, Mr. Daugherty had solved the manufacturing problems of the center pivot, and it quickly took hold throughout the Plains states and the West. In 1972, he received an insistent call from President Lyndon B. Johnson, whose center pivot at his ranch in Texas had stopped working. “My oats are a-thirstin’, ’’ Johnson said.

Mr. Daugherty dispatched a crew to make sure the president’s oats got their water.

Robert Burdic Daugherty was born Jan. 8, 1922, in Omaha and traveled as a child with his father, a livestock broker, to farms throughout the Midwest.

After graduating from Carleton College in Northfield, Minn., Mr. Daugherty served as a forward artillery observer in the Marine Corps during World War II. At the suggestion of an uncle, he invested $5,000 in a machine shop in 1946. He was one of three workers in the small business that built grain elevators and other farm equipment.

Valmont Industries, which still does most of its domestic manufacturing in Nebraska, remains the nation’s foremost builder of center pivots. The company also makes metal light poles, traffic signal supports, and utility towers and is the world’s largest producer of metal pipe.