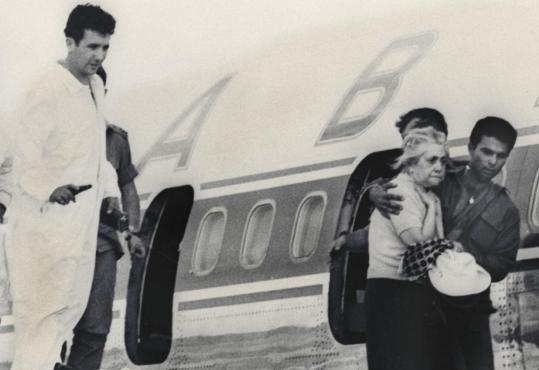 NEW YORK — Reginald Levy, who as captain of a hijacked Belgian airliner in 1972 was hailed as a hero for enabling Israeli commandos to storm the plane and rescue all 100 passengers and crewmembers, died Sunday at a hospital near his home in Dover, England. He was 88.

The cause was a heart attack, said his daughter, Linda Lipschitz.

Sabena Flight 571 from Brussels to Tel Aviv was 20 minutes out of Vienna on May 8, 1972, when four Arabs waving pistols rushed the cockpit. “As you can see,’’ Mr. Levy calmly told the 90 passengers, “we have friends aboard.’’

The “friends’’ were members of Black September, a terrorist organization that grew out of the Palestinian defeat in the 1970 Jordanian civil war and was responsible for the killing of 11 members of the Israeli team at the Munich Olympics four months after the hijacking.

The hijackers, two men and two women, ordered Mr. Levy to land at Lydda Airport (later Ben Gurion International Airport), where they threatened to blow up the plane unless 317 Palestinian guerrillas were released from Israeli prisons.

Within an hour of the radio message from Mr. Levy reporting the hijacking, Israel’s defense minister, Moshe Dayan, was at the airport to deal with the crisis. After dark, Israeli saboteurs crept under the parked plane, deflated the tires and disconnected hydraulic equipment.

At the hijackers’ request, Red Cross teams were summoned to carry messages between the plane and Dayan.

After presenting their demands, the hijackers were alarmed to discover that they could not take off. Mr. Levy started a conversation to calm them, chatting through the night.

“I talked about everything under the sun,’’ he said later, “from navigation to sex.’’

The next morning, to demonstrate their intentions, the hijackers sent Mr. Levy to the terminal with a sample of the explosives they had on board. He told the Israelis much more, describing the hijackers, their positions, and the black bags in which they were carrying explosives. He also told them, significantly, that there were no seats blocking the emergency doors.

Dayan promised to repair the plane and bring the prisoners to the airport. Bogus prisoners were shown to the hijackers from a distance, and another plane was taken out to a runway, supposedly to fly them to Cairo.

Twenty-one hours after Mr. Levy’s plane had been hijacked, two trucks carrying 18 men in the white overalls of mechanics drove up to the jetliner. They milled about the plane, supposedly checking tires and other equipment. Suddenly they tore open the exits above the wings and opened fire inside the cabin.

The fusillade from the men in overalls — in reality members of the elite commando unit Sayeret Matkal — ended within 90 seconds. The commandos were led by Ehud Barak, now Israel’s defense minister, and among them was Benjamin Netanyahu, now the prime minister.

The two male hijackers, who had returned fire, were killed. Another hijacker, a Jordanian woman, was not injured. The fourth was seriously wounded, as were several passengers.

Several days later, Prime Minister Golda Meir held a dinner for those involved in the rescue. She kissed Mr. Levy and cried, “We love you.’’ To criticism that the operation had endangered innocent people, she said, “When blackmail like this succeeds, it only leads to more blackmail.’’

The hijacking took place on his 50th birthday. His wife, Dora Shawcross Levy, was on board; they were planning to celebrate in Tel Aviv.

In 2007, Eliezer Sacks, one of the Israeli commandos, arrived at the offices of The Jerusalem Post and handed Lipschitz, then an editorial assistant at the paper, the blue Sabena captain’s cap her father had left on the plane. He gave her a letter he had written to Mr. Levy .

“I want to apologize for the long time, 35 years, that I forgot to give your hat back,’’ it said. “I hope the hat will find its way back to your head.’’ It did.