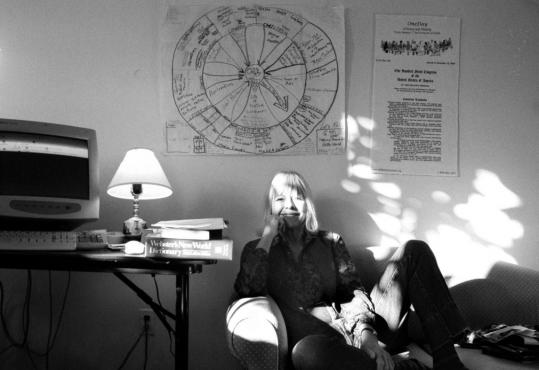 “Peace is like Carnegie Hall,’’ Linda Grover said. “If you want to get there, you’ve got to practice.’’ (Kevin Clark/ Washington Post)
By Patricia Sullivan Washington Post / February 27, 2010

WASHINGTON - Linda Grover, 76, who devoted more than 10 years to establishing Jan. 1 as a worldwide day of peace, died last Saturday of uterine and ovarian cancer at the Washington Home and Community Hospices.

Global Family Day, recognized by Congress, the UN General Assembly, and scores of heads of state, encourages people to share meals, pledge nonviolence, and celebrate by ringing a bell or beating a drum on the first day of each year.

Hence, Global Family Day, which she conceived when her own children, growing up in the 1970s, talked about how all the people in the world would surely come together on the first day of 2000 to live in peace and harmony.

Ms. Grover wrote a utopian novel, “Tree Island’’ (1995), on the topic and organized a 1998 meeting in Oregon’s Cascade Mountains of 50 millennium groups. At the same time, schoolchildren around the world began to agitate for a global day of nonviolence and no hunger. A children’s book by Steve Diamond and Robert Silverstein, “One Day in Peace, January 1, 2000,’’ also appeared in 22 languages.

Ms. Grover - whose background included stints as a television soap opera writer, boating magazine founder, and international caseworker - went to work in Washington, where she had once been a legislative aide and subcommittee clerk.

Linda Rauskolb was born in and raised in a military family.