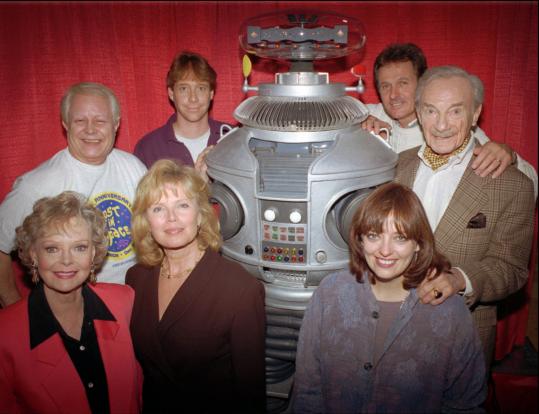 LOS ANGELES - Bob May, who donned The Robot's suit in the hit 1960s television show "Lost in Space," died yesterday at age 69.

He was a veteran actor and stuntman who had appeared in movies, TV shows, and on the vaudeville stage when he was tapped by "Lost in Space" creator Irwin Allen to play the Robinson family's loyal metal sidekick in the series, which debuted in 1965.

"He always said he got the job because he fit in the robot suit," said June Lockhart, who played family matriarch Maureen Robinson. "It was one of those wonderful Hollywood stories. He just happened to be on the studio lot when someone saw him and sent him to see Irwin Allen about the part. Allen said, 'If you can fit in the suit, you've got the job.' "

Although Mr. May didn't provide the robot's distinctive voice (that was done by announcer Dick Tufeld), he developed a following of fans who sought him out at memorabilia shows.

"Lost in Space" was a space-age retelling of "The Swiss Family Robinson" story in which professor John Robinson, his wife, and their children were on a space mission when their craft was knocked hopelessly off course by the evil Dr. Zachary Smith, who became trapped in space with them.

Mr. May's robot was the Robinson family's loyal sidekick, warning them of approaching disaster at every turn. His line to one of the children, "Danger, Will Robinson," became a national catch phrase.

The grandson of famed vaudeville comedian Chic Johnson, Mr. May was introduced to show business at age 2 when he began appearing in the "Hellzapoppin" comedy revue with Johnson and his partner, Ole Olsen.

He went on to appear in numerous films with Jerry Lewis and in such TV shows as "The Time Tunnel," "McHale's Navy," and "The Red Skelton Show." He was also a stuntman in such 1950s and '60s TV shows as "Cheyenne," "Surfside 6," "Hawaiian Eye," "The Roaring 20s," and "Stagecoach."

He was particularly fond of his "Lost in Space" role, once saying he came to consider the suit a "home away from home."

Lockhart said because it wasn't easy to get in and out of the suit, Mr. May kept it on during breaks.

"He was a smoker," she said. "From time to time [when he was on a break], we'd see smoke coming out of the robot. That always amused us."

In addition to his daughter, Mr. May leaves his wife, Judith; a son, Martin; and four grandchildren.