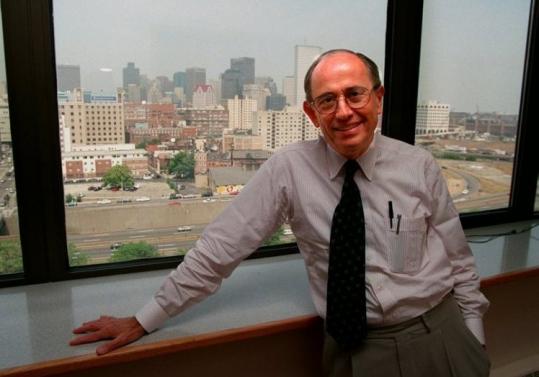 In the years before Alex d'Arbeloff cofounded the high-tech company , his ambition and business vision sometimes outstripped his clout.

"I was fired three times working for other people," he told the Globe in 1979. "But I was right. Ten years later they saw I was right."

He was right about Teradyne, too. In 1960, Mr. d'Arbeloff and his former MIT classmate Nick DeWolf founded their company in rented space above Joe & Nemo's, a hot-dog and sandwich shop on Summer Street in Boston. Teradyne, which makes automatic testing equipment for semiconductor, electronic, and automotive companies, grew into a billion-dollar business.

Mr. d'Arbeloff, who formerly was chairman of the MIT Corporation and was a fellow of the American Academy of Arts & Sciences, died of cancer Tuesday in Massachusetts General Hospital. He was 80 and had lived in Brookline.

"All of us privileged to know Alex are deeply saddened by his loss," Susan Hockfield, MIT's president, said in a statement. "MIT has lost an extraordinary friend who paired his passionate devotion to the Institute with a brilliantly dispassionate, clear-eyed view of how it could grow even stronger. . . . We will sorely miss his warmth, charm, humor, and remarkable gift for framing complex problems and inspiring visionary solutions."

Michael Bradley, president and chief executive of Teradyne, said in a statement that "many of us who were hired by Alex have now dedicated virtually all of our working lives to something worthwhile in the great company he founded. He created for us far more than a high-tech job opportunity. More importantly, he gave us the chance to work in a community of integrity and teamwork."

Committed to building his business in Boston, where many Teradyne employees lived, Mr. d'Arbeloff eschewed the Route 128 corridor that was attracting many businesses. His reasons were practical and monetary.

"We both lived in the city and wanted to be able to walk to work," d'Arbeloff told the Globe in 1964, the year Teradyne's annual sales topped $1 million. He noted that he and DeWolf also rented space downtown for less than the going rate on Route 128.

In a 1979 interview with the Globe, Mr. d'Arbeloff said he found high-tech business appealing because he liked "working with complex equipment. Knowing how the equipment is used and how to sell it is what fascinates me. It involves electronics. It involves human relations. It's very exciting."

Alexander Vladimir d'Arbeloff was born in Paris, a son of Russian immigrants who escaped their homeland around the time of the Bolshevik Revolution. With his family, he moved to South America, to New York City, to Los Angeles, and back to New York City.

He graduated in 1949 with a bachelor's degree in management from the Massachusetts Institute of Technology, where he and DeWolf met when they lined up alphabetically during an ROTC class. DeWolf, who left the company in 1971 and died in 2006, explained in a passage on Teradyne's website how he and Mr. d'Arbeloff decided what to call their business.

Mr. d'Arbeloff stepped down in 1996 as president of Teradyne, which by then had expanded internationally. Though the company later moved its headquarters to North Reading, Boston was always the center of Mr. d'Arbeloff's business universe. In a 1996 speech, he cautioned against letting sports teams, which at the time were not faring well, define the city's collective psyche.

"From where I sit, this is a city of winners," he said at a Globe breakfast honoring the Globe 100 companies. "The winner in the shaving business is Gillette. In the mutual funds business, Fidelity towers above the pack. Teradyne is the world's leading producer of automatic test equipment for electronics. Mass. General Hospital and MIT and Harvard are institutions known the world over for their excellence. Boston has a list of champions any other city in the world would envy."

Mr. d'Arbeloff, who married Brit Jepson in 1962, kept close ties with MIT, becoming a member of the MIT Corporation in 1989. He was named chairman in 1997, stepping down six years later to serve as honorary chairman.

With his wife, he created the Fund for Excellence in MIT Education, which supports innovations in teaching, and established the d'Arbeloff Lab in the mechanical engineering department. He also taught in that department and at MIT's Sloan School of Management.

In addition, Mr. d'Arbeloff served on the board of the Whitehead Institute for Biomedical Research, which has a teaching affiliation with MIT. He also had served as a trustee of the Isabella Stewart Gardner Museum and the New England Conservatory.

Fiercely competitive at work, Mr. d'Arbeloff was just as determined to spend time with his family, and he liked to tell the story of the day he took the Concorde from London so he could be home in time for dinner with his wife and children. He recalled that a British man wearing tight clothes sat next to him, and they talked through the flight, showing each other photos of their children and discussing business and politics.

Puzzled by the attention flight attendants paid to his companion, and surprised at the crowd that waited for him at the airport, he told his family at dinner that he thought the fellow's name was Mike Jaeger.

"At which time his son Eric said, 'Dad, you sat next to Mick Jagger,' " said P.A. d'Arbeloff, who is married to Mr. d'Arbeloff's younger brother, George. "The family burst out laughing."

Not a Rolling Stones fan, Mr. d'Arbeloff had never heard of Jagger.

Taking the Concorde so he could be home for dinner was not uncharacteristic, she added.

"Despite his massive success in business and philanthropy, what was most important to him was his family - unequaled," she said. "He has four children and six grandchildren and together with Brit, his wife, it was the world to him. He was always home for dinner, and dinner was wonderful stories and great talk about politics and business and life and everything that was going on in his family's world."

In addition to his wife and brother, Mr. d'Arbeloff leaves two daughters, Kate of Rio de Janeiro and Alexandra Nangle of San Francisco; two sons, Eric of Los Angeles and Matt of Brookline; five grandsons; and a granddaughter.

Services and burial will be private.