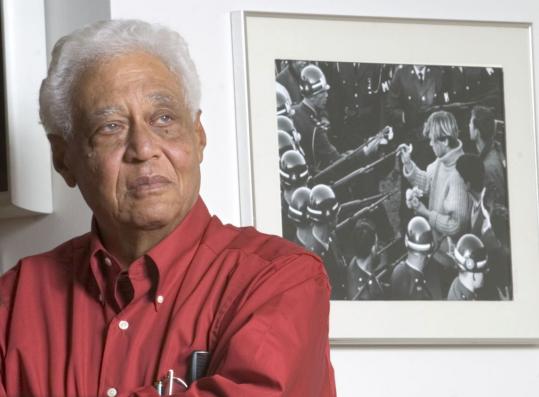 LOS ANGELES - Bernie Boston, the photojournalist who captured the iconic image of a young Vietnam War protester placing a flower in the barrel of a rifle held by a National Guardsman, died Tuesday at his home in Bayse, Va. He was 74.

Mr. Boston, a former photographer for the Washington Star, the Dayton Daily News, and the Los Angeles Times, died from complications of amyloidosis, a rare disease in which abnormal proteins build up in organs and tissues, said his wife, Peggy.

The photo known as "Flower Power" became Mr. Boston's signature image and earned him acclaim in the world of photojournalism. The photo, taken during the Oct. 22, 1967, antiwar march on the Pentagon, was a finalist for the Pulitzer Prize.

"Flower Power is one of those quintessential images," said Therese Mulligan of the Rochester Institute of Technology, which houses Mr. Boston's archives and in 2006 presented an exhibition of his works. "It sums up that period, how a lot of people feel about the '60s."

"And this young man appeared with flowers and proceeded . . . [to] put them down the rifle barrel," he told National Public Radio in 2006. "And I was on the wall so I could see all this and I just started shooting."

The resulting photograph is a rich, nuanced image of a chapter of US history.

"In photojournalistic terms, it's referred to as a decisive moment when everything comes together," Mulligan said of the moment Mr. Boston captured.

Back at the office, Mr. Boston's photograph received a lukewarm response. It was not prominently displayed in the newspaper.

"The editor didn't see the importance of the picture," Mr. Boston said later. "We buried it," he told NPR. "I entered it in contests, and it started winning everything and being recognized."

The same year he photographed Flower Power, Mr. Boston shot a portrait of former Black Panther H. Rap Brown. He captured images of the civil rights movement, including a portrait of the Rev. Martin Luther King Jr. during his Poor People's Campaign.

Mr. Boston, a native of Washington, D.C., and graduate of Rochester Institute of Technology, photographed every president from Harry Truman to Bill Clinton.

In 1981 the Los Angeles Times hired him as a staff photographer. Six years later, Mr. Boston was a finalist for a Pulitzer Prize in the spot news category for his photograph of King's widow, Coretta Scott King, at the unveiling of a bronze bust of King.