Behind the scenes with Cupid

Whether our matches are brilliant successes or unmitigated failures, Dinner With Cupid, the blind-dating column we launched a little more than a year ago, has been a hit with readers. We look back on what we’ve learned.

The morning after I arranged the first ever Dinner With Cupid date, I jumped out of bed and rushed to my office at the Globe, arriving an hour earlier than usual to see if I’d received an e-mail from Ryan or Katherine. It was January 2009, and they were the first couple I’d set up, so I was eager to hear how it went. (“I think you’re more nervous than either of them are,” my husband joked the night before. “Maybe you’ll get invited to the wedding.”)

As I waited for my e-mail to load, my heart began to race. I was hoping to pull up their exit questionnaire, which asks daters to describe a play-by-play of the date and, most important, to tell us if they’d go out with each other again.

I was so nervous about playing cupid, in part because I felt extremely unqualified. My bosses had cooked up the idea for the column only a few weeks before, inspired by a similar one published by The Washington Post Magazine, and I was chosen to head it up. But who was I to meddle with the hearts, minds, and egos of single Boston? I’d married the one man I’d dated consistently throughout my adult life, I’d never been on an online dating service, and as for going on a blind date – ha! – never. My friends actually roll their eyes when I try to dole out dating advice: What do you know about dating?

Exactly. As I opened Ryan and Katherine’s e-mails, I feared that they’d hated each other or, worse, that one of them had taken a look at the other and left without saying a word.

A smug sense of satisfaction flashed over me when I saw it had gone well – more than well. They were up for a second date. Suddenly, I was a modern-day Yente, the Globe’s very own Aphrodite.

In the subsequent weeks, I fell in love with matchmaking. A hopeless romantic who knows every Nora Ephron movie by heart, I was convinced that I would find these lonely souls their forever someone.

Except the dates that followed didn’t go as well. After a few weeks, readers noticed my poor batting average and wrote in wanting to know: How in the heck was the Globe making these matches?

Matchmaking, as described by novelist Curtis Sittenfeld, who loves the pastime, is so seductive because when you introduce two people, you’re creating a story – and who doesn’t love a good story? “Whether or not the two people like each other, you’re putting a plot in motion. Either the couple does get along, and that plot continues and expands, or they don’t and the plot quickly ends,” she wrote on Salon.com.

In Dinner With Cupid, we all get to watch as the tension unravels. We wonder if the couple will click, if one will like the other more, if someone will do or say something stupid and turn the other off. And the plot thickens. It’s why the column has become so popular, and many say it’s the first thing they read in the magazine.

We’ve set up 62 couples since we launched the column in the February 1, 2009, issue, and we’ve had about as many successes as we’ve had failures: So far, 27 couples reported they’d be up for a second date, and 25 said they would not go out again, while six were interested in pursuing friendship. (Four couples didn’t commit to any of those answers.) Still, we haven’t found any couples matched during our first year that are still dating.

There have been three Cupid matchmakers since the column began, and we’ve all paired couples using the same basic criteria. It’s essential that the two people have something in common. The most recent Cupid editor, Veronica Chao, has set up the greatest number of successful dates, by sheer dint, she says, of having done it the longest and having help from some savvy Globe interns. Still, all of us who have done the matching have relied on something deeper than logic when setting two people up. After reading through all of an individual’s likes and dislikes, you just get a feeling that two people may be right for each other. It’s a leap of faith, a hardened hope that, this time, maybe you got it right.

Case in point: Phil Ganz and Alex Hadley (“Good Sports,” April 5, 2009). Both seemed gregarious and good-natured, and they described their perfect Saturday the same: morning workout, afternoon game. We figured they’d be planning a second date at Fenway by dessert. But Alex says Phil didn’t stop talking about his high school wrestling days long enough to give them a chance to get to know each other. “I had no idea why you set us up until the story came out,” Alex told me recently. “Then I was like: ‘Of course they set us up. We made such a good match on paper.’ ” Phil admits he may have been into Alex a little more than she was into him, but he’s not convinced they were right for each other. Alex had “double-booked” him, he says, a real turnoff.

When we matched Kirk Israel with Sarah Shallbetter (“Talking Heads,” March 8, 2009), we had no idea that his self-described chatterbox ways would spoil the date for her. Many male applicants have the opposite problem – they barely express themselves at all. Of 428 men who started to answer the 35-question application online, only 278 have completed it. Actually, it’s been hard to find male applicants of all ages, but particularly those older than 30, whereas we’ve amassed 993 completed applications from women. Readers sometimes complain that we don’t feature enough gay and lesbian couples or older couples – and we agree. But we just don’t have the applicants.

There are patterns to Cupid applicants’ tastes and backgrounds. In response to one application question, straight women across age groups tend to say Julia Roberts or Sandra Bullock would play them in a movie on their life. Straight Cupid men see themselves most in Matt Damon and Tom Hanks. Most female applicants are looking for men in the 30 to 39 age bracket, while most male applicants prefer women ages 21 to 29. Only 14 percent of Cupid men are divorced; the rate for women is 23 percent.

We’ve also noticed a puzzling trend in the outcome of our matches: couples that report a great date but then say they’re not up for a second. After talking to several folks we’ve set up, I may be able to solve the mystery. There’s the date that gets reported in the exit questionnaire and the date that really happened. Out of respect for the person they went out with, some men and women admit that they tend to report more positive feelings in the exit questionnaire than they actually feel. They give the date the grade they’d want to be given – and sometimes they even get in touch with each other beforehand to coordinate answers. French Clements says Samantha Hammel told him “You better give me an A” (“Song and Dance,” July 19, 2009). Even though he wasn’t that into her, he did give the date an A-. “I would have given her something close to a B,” he says, “but I didn’t want to be a jerk.” That’s his side of the story. We’re not sure what Samantha really thought about French – she didn’t respond when we tried to get in touch with her.

A couple of daters I spoke with expressed their shock at being rated a B+ after giving their date an A or A-. It was a surprise blow to the ego.

And some couples who seemed like a sure thing never quite jelled. We set up Davy Fields and Jessica Bilbo (“Oh, Very Young,” September 20, 2009). All signs pointed to a second date – Davy reported, “It was already planned.” Still, Jessica says that Davy texted her so often after the date that she began to wonder: “Doesn’t he have anything better to do?” As a result, she says, she lost interest. There was no second date. Davy didn’t want to comment for this story.

Remember 50-somethings Debra Smigel and Daniel Ladd (“A Case of Deja Vu,” August 9, 2009)? On their date, they’d realized that they’d grown up next door to each other. They did get together several times after the column appeared – he had her to his home for brunch, she invited him to a Paula Poundstone concert. But ultimately, Daniel says, “things fizzled.” “It would be nice to stay in touch with her as a connection to old times,” he says. He’d like to be friends. Debra preferred not to comment for this story.

Dinner With Cupid has come a long way since we set up Ryan and Katherine. (In case you’re wondering, they didn’t go out again either.) But though we’ve gotten better at matching people who can enjoy each other’s company – at least for a night – it’s physical attraction, that tingly spark, that continues to remain unpredictable. While we can set up two people who seem like the perfect couple on paper, even paying attention to what they say they find physically attractive in a mate, we can’t know whether they’ll make each other’s heart skip a beat – and often it seems that’s why a second date doesn’t happen.

But if the Cupid editors have learned anything in our first year of matchmaking, it’s that there’s a thrill in the possibility of love. It’s what keeps men and women applying for dates, why we keep matching people up, and why readers young and old, single and married tell us they love the column.

After all, there’s always next week.

Brooke Lea Foster, a former assistant editor for the Globe Magazine, is a freelance writer in New York City. Send comments to magazine@globe.com. To apply for the Dinner With Cupid column, go to boston.com/cupid. 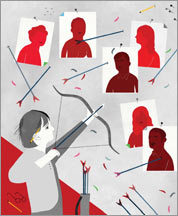 (Illustration by Gracia Lam)
Read more from this issue.

Match Points: If dating were a course for academic credit, turns out plenty of Dinner With Cupid’s participants would be whiz kids. We asked all of them to grade their dates, and the top three grades given were A, A-, and B+.