The case for mandatory composting

It works in San Francisco. And it could work in Boston. 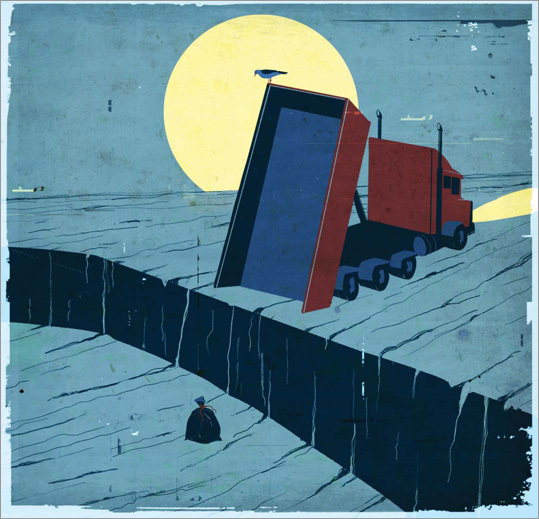 Living in the country, I have the luxury of a backyard compost pile. Right now it’s overflowing with acrid slop, but eventually it will yield dark, rich soil nutrients for the garden. If my potato peels, leftover rice, and parsley stems had been buried in a landfill, deprived of sun or air, those same scraps would have given rise to methane, a potent greenhouse gas that contributes to global warming.

Nationwide, there’s a lot of potential in all that slop. In 2008, Americans generated nearly 32 million tons of food waste, and less than 3 percent of that was composted, according to the US Environmental Protection Agency.

Scattered households with compost heaps won’t make a dent in this problem. But local governments can, and should. Last summer, San Francisco passed the first large-scale municipal composting law in the nation. (Seattle actually began mandating composting earlier, but it exempts businesses and apartment buildings.) Today, San Francisco collects 500 tons of food waste a day, picking up from 225,000 homes and apartments and 7,000 businesses. Scofflaws can be punished with fines from $100 to $1,000.

On pickup days, kitchen scraps get dumped into tightly covered green curbside bins, alongside black ones for trash and blue ones for recyclables. Squeamish customers can line their compost bins with compostable bags. The food waste goes to a processing facility, where it’s turned into high-grade compost. That, plus recycling, is expected to keep about 75 percent of San Francisco’s trash out of landfills this year. For 2020, the goal is 100 percent, or zero waste, which to many people would have been unthinkable not that many years ago.

Besides reducing landfill waste and methane emissions, composting enriches soil and reduces the need for water, fertilizers, and pesticides.

Could a composting law work in Massachusetts? It turns out, it can, and it does. Nantucket has mandated composting for more than a decade, ever since the island’s landfill started running out of space. Food, yard waste, and other organic matter -- about 50 tons a day -- go into a 185-foot-long “digester” that accelerates decomposition to accomplish in three days what normally takes Mother Nature six weeks. Over the past decade, the composting has kept more than 60,000 tons of methane out of the atmosphere, says Nantucket public works director Jeff Willett.

For island residents, it’s now second nature to divide trash into two streams: recycling and organic waste. They can haul it away themselves for free or pay for a pickup service. “For every 100 tons of trash that comes into our facility, only 8 tons go into the landfill,” Willett says. That’s a 92 percent diversion rate. What’s left? Mostly film plastic, like plastic bags.

Voluntary programs, while helpful, have limited impact. In Cambridge, residents unloaded 44 tons of food scraps last year at two drop-off centers, and 60 Cambridge businesses and institutions compost their food waste through a curbside collection program funded by a grant from the state’s Department of Environmental Protection. Through another MassDEP program, some 200 supermarkets and groceries across the Commonwealth compost about 27,000 tons of food waste per year, saving each store $20,000 to $40,000 annually in disposal costs. But that’s nothing compared with the estimated 1.1 million tons of food waste produced each year by Massachusetts businesses and institutions. (In its forthcoming 2010 solid waste master plan, the state environment department is considering a ban on landfill and incinerator disposal of all commercial food waste.)

Last year, the city of Boston issued a call to the private sector to gauge interest in developing a type of digester operation, pioneered in Toronto, which captures methane gas and then uses it to generate electricity. But Boston environment department director Bryan Glascock says the economic downturn has “sucked a little wind out of the room.”

So why wait for the private sector? The city already pays $80 a ton for private haulers to pick up its 200,000 tons of residential trash annually. That’s about $16 million a year in garbage fees.

So far, San Francisco and Seattle are the only major US cities that require residential organics collection, according to the December issue of BioCycle, although more than 90 cities and towns offer some type of food-waste collection.

Maybe zero waste isn’t a fantasy, after all. Now if we could just do something about those plastic bags.

Aubin Tyler is a freelance writer in Amherst. Send comments to magazine@globe.com.