Anomia? It’s ancient Greek for chaos as well as the inability to recall a word. That’s the game: rapidly recalling specific examples when faced with a general category, anything from “shampoo brand” to “fictional robot.”

You’ve conducted a couple hundred play-test groups. The response? One called it “Concentration meets Blink meets New York Times Crossword Puzzle.” Another, “the radioactive mutant spawn of Trivial Pursuit and Spit.” Most players love that there’s no waiting; you’re always on. Plus, it’s very funny to hear someone shout “Prell” or “10 Downing Steet.”

A nice high-brow/low-brow mix? Yeah, you could be asked to name a palindrome one moment and a cause of death the next. I worked hard to make it as broad and accessible as possible. Regardless of age or education level, we’re all united in knowing that our brains will betray us under pressure.

Have you always been a games aficionado? I’m not much of a regular gamer, though I do enjoy chess, Bananagrams, Set, and Blink. I prefer playing games in person, versus on the computer. It’s funny, whenever I mention having created a game, most people assume it’s computer-based.

Has the recession affected your venture? There seems to be a growing audience for affordable parlor games. And I remain surprised that it took only seven weeks to network and raise the $20,000 needed to self-publish the game. I pre-sold 500, manufactured 2,500, and have sold over 900, mostly through the website. I’m in a few independent, local stores. The next goal is to find a distributor and get into more retail stores.

How has your life changed since you began working on this game more than a decade ago? I still work full time in Web publishing, but I now have a wife, kids, and a house -- with an attic filled with pallets of Anomia awaiting a good home. 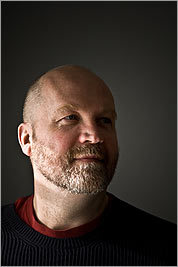 (Photograph by Jared Charney)
Read more from this issue.
Your comment is subject to the rules of our Posting Policy
This comment may appear on your public profile. Public Profile FAQ