It was nearing 2 a.m. on a spring night in 1990, and 24-year-old Diane Paulus was unwinding with a group of young actors who, like her, had just completed a round of acting classes with the legendary director Mike Nichols. Inevitably, talk turned to what the future might hold. Most of them envisioned careers as performers, but Paulus startled the group by announcing, as though it were the most natural thing in the world, “I want to be Robert Brustein and run the American Repertory Theater.”

Fast-forward to 2008. Paulus, now one of the hottest theater and opera directors in the country, has indeed just been named to Brustein’s former job, artistic director of the ART. As she looks ahead to her first slate of shows in the fall of 2009, again she sets the bar at lofty and perhaps unwise heights: “My goal for my season at the ART is that every show is an event.”

Audacity, thy name is Paulus. But as baseball great Dizzy Dean once said, it’s not bragging if you can do it. And so far, Paulus has. With her first three productions, a trio of boldly stylized reworkings of Shakespeare, Paulus created exactly the kind of mold-breaking, buzz-generating events she had promised, drawing a younger, more diverse audience and delivering a welcome jolt of adrenaline to the local theater scene.

First came The Donkey Show, created by Paulus and her husband, Randy Weiner, which turned A Midsummer Night’s Dream into a disco bacchanal. Then came Sleep No More, a co-production with the British theater troupe Punchdrunk that re-imagined Macbeth as a kind of danse macabre through which the audience wanders, scene by scene. Then came Best of Both Worlds, a high-spirited gospel and R&B adaptation of The Winter’s Tale that opened at the end of November.

“I felt there was no taking the middle road,” Paulus, 43, says in her office at the Loeb Drama Center. “We were going to go for big choices, big impact.”

Not everyone loves her choices. With its emphasis on music and imagery and sensation -- your search for Shakespeare’s words in these productions will largely be in vain -- Paulus’s brand of theater is off-putting to some. Yet she insists that the ART can be a national leader in reinventing theater so it is “more constantly alive in the broader culture” rather than consigned to the status of a “museum piece.” Indeed, as far as Paulus is concerned, the response by Bostonians to Donkey Show (which ran for six years off-Broadway) and Sleep No More is proof of the proposition that undergirds her approach to theater: “The audience wants to be challenged, and they will meet you more than halfway if you deliver.”

But Paulus communicates none of the supercilious, shock-the-bourgeoisie hauteur that is so tediously common among avant-garde artists. She may be a Phi Beta Kappa graduate of Harvard with an MFA in directing from Columbia University’s School of the Arts, but she describes herself as a populist, and she acts like one. In person, Paulus is friendly and down-to-earth, chatting enthusiastically about her two young daughters. When discussing the ART’s relationship with such arts organizations as the Huntington Theatre Company, she frames it as a matter of teamwork, not competition.

Yet there is no mistaking her confidence. Paulus had carved an independent career path for two decades before coming to the ART. She built a name as a director who was willing -- nay, eager -- to shake up the classics, whether it was in theater (as with The Karaoke Show, an adaptation of Shakespeare’s A Comedy of Errors) or opera (a rock version of Turandot set in a pro wrestling arena). She and Weiner made time along the way to found a cutting-edge theater company called Project 400.

When the ART came calling, Paulus was riding a career crest as the director of an acclaimed Public Theater production of Hair that would eventually move to Broadway, where it became a hit and won this year’s Tony Award for Best Revival of a Musical. In July 2008, Paulus directed a much-praised version of Cole Porter’s Kiss Me, Kate at Glimmerglass Opera in Cooperstown, New York.

All things considered, Paulus says, the ART job is one of the very few institutional positions she would have said yes to. She seems glad she did. She talks often to Brustein, whom she calls a mentor. In the corner of her office is a poster from a 1984 ART production of Samuel Beckett’s Endgame that Paulus helped herself to as an undergraduate and is now returning to the Harvard premises a quarter century later. In other words, she is making herself at home. One minute she will sketch a grand and solemn vision -- “Theater ought to be at the center of not just cultural life, but also civic discourse, intellectual life, what it means to be an engaged citizen” -- and the next she will make a wry joke about The Donkey Show: “People are being connected by . . . the universal power of disco!”

But her artistic bottom line is clear: There will be no turning back from the adventurous path -- big choices, big impact -- that has made her a central figure on the Boston cultural scene in a very short time. “The mission of the ART is to expand the boundaries of theater,” Paulus says. “If we’ve got that mission, let’s really do that.”

Don Aucoin is the Globe’s interim theater critic. E-mail him at aucoin@globe.com. 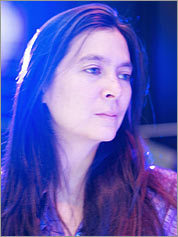