The groundbreaking show Sleep No More has given me, and Greater Boston, a much-needed, exhilarating jolt. 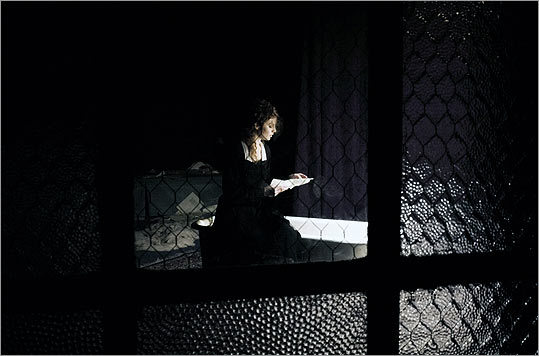 Stirring sights You never know what you're going to come across as you roam through the show, which takes place in halls and rooms on four floors. (Photograph of "Sleep No More," a Punchdrunk Art Presentation, By Stephen and Lindsay Nolan)
By Ed Siegel November 8, 2009

This doesn’t happen to me every day. I’m standing in the middle of a crowd. A beautiful woman in some duress looks at me, holds out her arm beckoning to me, takes me into her room, draws closer and closer, takes off something I’m wearing, and runs her fingers seductively through what’s left of my hair.

OK, let’s be honest, this had never happened to me until the recent opening night of Sleep No More, a British troupe’s mind-bending adaptation of Macbeth in collaboration with the American Repertory Theater and its new artistic director, Diane Paulus. In the staid environs of Brookline, no less, where Punchdrunk and ART have taken over all four stories of the Old Lincoln School through January 3.

You might have heard the buzz -- you enter the school by a side entrance, stumble along a dimly lit corridor, enter a bar called the Manderley, and wait for your number to be called. You’re then given a mask -- no wonder she picked me -- and roam around the building looking for scenes from Macbeth while perusing installations suggested by the play.

So there I was, the dutiful wanderer, watching Duncan getting shaved before getting axed, ogling a sensual piece of modernist choreography I imagined to be a representation of the Macbeths’ dance of death, immersing myself in scenes evoking Luis Bunuel or David Lynch.

Then I noticed a crowd of people watching an agitated woman closing the door behind her. I looked at her. She looked at me. When she held out her arm, I thought -- hoped -- this was pantomime. I loathe audience participation. The purpose, most of the time, seems to be to humiliate, not engage, the spectator.

This was different. Sleep No More is obviously the kind of event where you leave your preconceptions, your rules, at the door, or there’s not much point to attending. Wandering the halls by myself, coming upon one eerie scene after another, I felt like a character on a Kubrickian odyssey -- a masked Tom Cruise searching for sensual pleasure in Eyes Wide Shut or Jack Nicholson looking for escape from the ordinary in the rooms of the Overlook Hotel.

The Sleep No More seductress, I later learned, was Hecate, a witch played by Careena Melia, who was Helen of Troy in a show last season. As my uncle used to say, “She’s a dish.” What was in store for little old nervous me? In one way it felt like I was back in high school, simultaneously afraid and excited, wanting to kiss the girl but wondering if it was the right thing to do.

Well, here’s what happened. She took off my mask and as she moved closer, her lips close to mine, she told me a story of the last girl on earth, who goes to the sun and moon and doesn’t find any solace there, either. It was simultaneously arousing and heartbreaking. I didn’t know whether to put my arm around her or to cry, so I sat next to her impassively as she told the story. She put my mask back on and showed me to the door, shaken, but free to search out scenes from the story of Macbeth, a man who did listen to the witches and proceeded to break all the rules.

Personal experiences aside, Sleep No More does what all great art does: It asks questions rather than gives answers, it confronts your assumptions rather than comforts them, it takes you into a different world and transforms your own. True to its title, it troubled my sleep.

It’s been a tough year in the arts for the area. The Rose Art Museum fading, the North Shore Music Theatre closing, other organizations and troupes struggling. We needed this. Boston has never seen anything quite like Sleep No More before. Neither has any North American city, New York included. The streets of Brookline seemed alive to new possibilities; so did the world of theater.

To paraphrase Rodgers and Hart, we’re wild again, beguiled again . . . bewitched, bothered, and bewildered are we.

Ed Siegel is former theater and television critic for the Globe. E-mail him at esiegel122@comcast.net.

Correction: Because of a reporting error, the Perspective essay in today's Globe Magazine, which is printed in advance, incorrectly attributes the song "Bewitched, Bothered, and Bewildered." It was created by Richard Rodgers and Lorenz Hart.

Correction: Because of inaccurate information provided to the Globe, an essay in the Nov. 8 Globe Magazine about the production "Sleep No More" misidentified a character and actress. The character is The Second Mrs. de Winter, played by Poornima Kirby.