Leaving behind a charmer in Porter Square 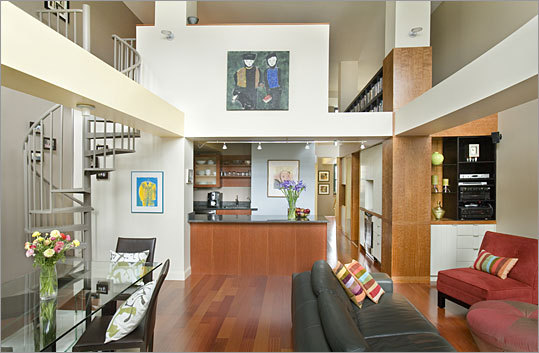 When Bette Skandalis and Jo Seidler decided to downsize from their Cambridge Victorian in Porter Square, they fell for a condo in a former industrial space in East Cambridge. That is, a drawing of it.

"That's all we had to go on," says Skandalis. "Just architectural sketches and plans, which I really didn't get a great sense of." After visiting their new condominium at the former Haviland candy plant, then still under renovation, they felt the space was too blank. "It was like going into a giant empty cereal box," says Skandalis, a retired financial adviser and aspiring writer, recalling their first glimpse of the three-level, two-bedroom condominium. "Everything seemed so vast and white and empty, with these gargantuan beams and posts running across."

So they called on designer Renee Lyter of Thomas R. Huth Architects to help them transform the space. Her first step - minimize those beams. Some had to stay for historical and structural reasons, but Lyter decided to make them blend in. "She softened the appearance some with natural cherry wood to make them sculptural elements instead of intrusions," says Seidler, principal at a marketing communications agency in Cambridge.

Next came the lighting strategy. "The condo had next to no lights at all," says Lyter. "Barely anything was even wired in." She called for a combination of recessed, track, and sconce lighting, plus floor and table lamps, for what Skandalis describes as "museum-quality illumination." The new lighting and the loft's oversize windows cast an amber glow over the Brazilian-cherry floors and kitchen cabinetry. To draw down the vaulted ceiling and make the space more intimate, the walls were painted with creams, cocoas, and yellows, a suggestion from color consultant Bruce Danzer.

The greatest challenge was storage. Most of the living space - living room, dining room, kitchen, master suite - is on the open and airy second floor (the first floor contains a guest room and bath). Skandalis and Seidler wanted to stash brooms and dog food and other everyday items on the second floor, but there was no pantry. And they both wanted personal work space with a desk and filing cabinets; Skandalis planned to use the third-floor loft as an office for her writing.

Running the length of one wall on the second floor was an expansive hallway. It was wasted space. Too small to be a real room, wider than a hall needed to be. Lyter used the area to install a two-sided, 14-foot-long, 2-foot-deep storage unit. "We built underneath the beams, and we just kind of filled it all in and made a double-sided cabinet," says Lyter. "It actually created a space."

On the side of the cabinet that faces the kitchen, Lyter incorporated a pantry, cubbies for books, an under-counter fridge, and a granite surface that adds counter space. A sliding glass door makes it possible to step behind the unit, where its other side includes a built-in desk, bulletin board, and filing cabinets. The space is narrow, so Lyter made sure the unit had lots of openings. "The `holes' lighten it up and make it a little airier," says Lyter. "You don't feel like you're totally trapped on the other side."

Lyter's design added an enormous amount of storage, but it didn't detract from the condo's original open floor plan. Says Skandalis: "Without this unit, the whole function and look of the place would be so very different."