How'd They Do That?

A raw-food chef turns nuts into cheese (and performs other delicious miracles).

The restaurant Grezzo, which, in Italian, means "rough or raw," opened two months ago in the North End. Its owner, Alissa Cohen, a petite brunette who is married and who divides her time among three states, is the author of the cookbook Living on Live Food, which prescribes eating only fruits, vegetables, sprouted grains, and nuts, with nothing cooked to temperatures above 112 degrees - a little warmer than a baby's bath water. Her restaurant does the same.

Yes, it sounds odd. But the food at Grezzo is complex and delicious. Using a dehydrator and an amped-up blender to create textures and deepen tastes, chef Leah Dubois and her kitchen staff manage to produce an ever-changing menu of imaginative and flavorful soups, "pastas," and "cheeses." (Though calling something "buffalo milk mozzarella" when it is, in fact, ground almonds or cashews is a lot like playing house.) Why bother? Cohen, who is 40, turned to a raw diet 20 years ago when, she says, she was suffering from "fibromyalgia, bone aches, and pains." She was working in a health food store and learned about raw food there. This daughter of the Mel who ran Mel and Murray's Deli in Lynn (closed in the late 1980s) believes that cooking food destroys natural enzymes that the body can use for healing. "Within six months of switching to an all-raw food diet, I was cured," Cohen says. "And my eyesight was healed, too. I didn't need glasses anymore." (There isn't much science behind these claims. "We don't get our enzymes from food," says Dr. Meir Stampfer, professor of epidemiology and nutrition at the Harvard School of Public Health. "Our bodies produce them.")

But don't let this - or the laminated brochure on each table outlining 40 more "reasons to eat raw" - bother you. The simple fact is, the food at Grezzo is wonderful, and isn't that the best reason to go out to eat? Service here adds a lot, too: The staff all have a certain contented, healthy look about them and are well-informed and pleasant. Maybe it's all that raw food they're eating.

Scott Haas is the winner of a James Beard award. Send comments to magazine@globe.com. 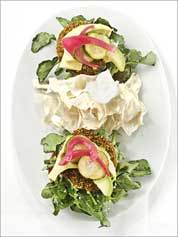 Grezzo sliders. The patties are made of sunflower seeds, carrots, red bell peppers, cashews, and an Indian-inspired spice blend. (Photo by Wiqan Ang)

restaurants for every occasion