A whiff of history

When smells vanish, we lose a whole dimension of the world. Now there’s a movement to change that. 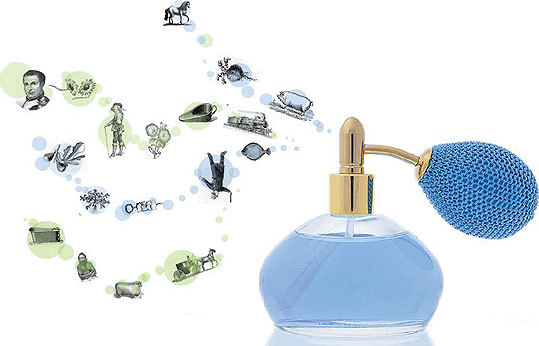 Think of some of your most powerful memories, and there’s likely a smell attached: the aroma of suntan lotion at the beach, the sharpness of freshly mown grass, the floral trail of your mother’s perfume. “Scents are very much linked to memory,” says perfumer Christophe Laudamiel. “They are linked to remembering the past but also learning from experiences.”

But despite its primacy in our lives, our sense of smell is often overlooked when we record our history. We tend to connect with the past visually - we look at objects displayed in a museum, photographs in a documentary, the writing in a manuscript. Sometimes we might hear a vintage speech, or touch an ancient artifact and imagine what it was like to use it. But our knowledge of the past is almost completely deodorized.

“It seems remarkable to me that we live in the world where we have all the senses to navigate it, yet somehow we assume that the past was scrubbed of smells,” says sensory historian Mark Smith.

It seems far-fetched to think we could actually start to smell the past - or somehow preserve a whiff of our daily lives. But increasingly, technology is making it possible, and historians, scientists, and perfumers are now taking the idea of smells as historical artifacts more seriously. They argue that it’s time to delve into our olfactory past, trying harder to understand how people experienced the world with their noses - and even save scents for posterity. Their efforts have already made it possible to smell fragrances worn a century ago, to re-create the smell of a rare flower even if it goes extinct, and to better understand the smells that ancient cultures appreciated or detested.

To put smells in a historical context is to add a whole dimension to how we understand the world. Boston’s Back Bay, for instance, has at different times been filled with the smells of a saltwater marsh, a cesspool, horses, and car exhaust. Some smells vanish, new ones arise, and some shift in a way that tells a cultural story. The jasmine and leather notes of a Chanel perfume from 1927 help us understand the boldly androgynous women of the flapper era, just as the candied sweetness of the latest Victoria’s Secret fragrance tells us something about femininity today. What we smell in our cities, homes, and natural spaces is just as much a part of our lives as the what we see, hear, and touch.

Smell is unique among the senses in the way it is processed by the brain - olfactory information travels directly to a brain region linked with the hippocampus and the amygdala, sites of memory and emotion. Scientists have suggested that the way smell is processed makes smell memories particularly strong and persistent. But outside of our memory, smells themselves are ephemeral: They are formed by volatile chemical compounds that can easily disperse and disintegrate. So smell is both a powerful part of our experiences and an evanescent one.

But while smells are not as enduring as solid objects, technology has found ways to make them less ephemeral. Perfumes can be preserved for long periods of time when kept from light and oxygen, and ambient odors can often be analyzed and distilled into a chemical formula, which can be re-created synthetically by a skilled perfumer.

A pioneer of this approach is Roman Kaiser, a Swiss fragrance chemist who developed a technology called “headspace” in the 1970s that made it possible to capture and analyze the scent given off by flowers and other objects. Using a glass container, a pump, and a sampling trap that gathers molecules using a solvent or coated surface, the system allows a chemist or perfumer to gather the volatile scent molecules exuded by an object without harming it. In 1995, Kaiser read a book called “Vanishing Flora” that contained beautiful, detailed illustrations of rare and endangered plants, and had an idea: He convinced his employer, , the world’s largest flavor and fragrance company, to let him embark on an olfactory version of the project.

Over the past 10 years, Kaiser has traveled the globe to capture the scents of hundreds of rare and endangered plants. His recently published book, “Scent of the Vanishing Flora,” contains lists of chemicals representing the formula for each plant’s scent, and he has also reconstituted many of these fragrances synthetically. His main purpose was to show people the olfactory beauty in nature, but it also has scientific value: A plant’s scent is an important component of its evolution and ecology. “These are documents,” Kaiser says, “so you would be able in 200 years to re-create these scents when all these plants do not exist any more.”

Perfumers like New York-based Christopher Brosius have used headspace to re-create less obvious smells, like the odor of an old fur coat or a well-worn paperback. Their goal is an artistic one, but the same approach could serve as the beginning of a database. Imagine having a library of scents specific to a particular time or place, from the strangely sweet aroma of a plastic-wrapped CD case to the blend of horse dung and candy that permeates Boston’s Faneuil Hall.

Documenting these smells for future historians might reveal our preoccupations and desires in ways that other sensory information couldn’t. “If you saved the mall smell, you’d see that people were obsessed with cassia cinnamon,” says James McHugh, an assistant professor of religion at University of Southern California, referring to the ubiquitous odor of Cinnabon.

Not surprisingly, the perfume industry is at the cutting edge of scent preservation. An institution called the Osmothèque, headquartered in Versailles, France, operates as a kind of Library of Congress of perfumes - a collection of historically important perfumes, in their original formulas, kept chilled in aluminum flasks. The air in each flask has been replaced with argon, an inert gas that won’t react with the perfumes like oxygen does, helping them stay stable over time. Laudamiel is currently spearheading an effort to bring some of these perfumes to New York City, and has created an Academy of Perfumery and Aromatics that will represent the Osmotheque in the United States.

Patricia de Nicolaï, an independent perfumer and president of the Osmothèque, recently launched a perfume called Kiss Me Tender, a delicate perfume of almond-like heliotrope that was inspired by a perfume base from the 19th century. “Sometimes when you go through very old perfumes, you can find an idea completely forgotten. This is a source of inspiration,” she says.

But what about all the smells that have already disappeared? Historians are finding ways to study these, too. Sometimes this starts with a written description. Using notes made by Napoleon’s assistant, the Osmothèque reconstructed a cologne specially made for the French leader during his exile on the island of Saint Helena before his death in 1821. When McHugh was completing his dissertation in Sanskrit and Indian studies at Harvard, he encountered a wealth of olfactory information in ancient and medieval Sanskrit texts: detailed formulas of perfumes and incenses and instructions for their use, as well as descriptions of odors in everyday life. McHugh became interested in “turning these lists of words into a thing,” he says, and attracted the interest of Laudamiel, resulting in a series of fragrances based on these ancient formulas.

In some cases, Laudamiel took imaginative liberties. McHugh says that the texts, which were mostly written by wealthy Brahmins, mentioned certain smells in a positive way and others in a negative way. Laudamiel used these descriptions to create two scents that represented a Brahmin’s ideal - clarified butter, milk, mango blossoms, honey, and sandalwood - and his worst nightmare - smoke, rotting flesh, alcohol, and garlic.

“It was experimental, and some people thought it was too cute,” McHugh says. “But that’s the idea - to see if we could try it.”

At the most scientifically ambitious end, archaeologists are using modern analytical technologies in an attempt to bring old scents to life. Techniques to analyze organic residues left behind on artifacts have been used to study diet and cooking practices in ancient cultures, and have also begun to be used to study fragrances, such as those from incense and perfume. Bonn University’s Egyptian Museum, for instance, has been working to analyze and re-create the Egyptian pharaoh Hatshepsut’s perfume from residue from a 3,500-year-old bottle. The museum plans to announce details soon; its curator says the perfume contained more than 80 ingredients.

Exciting as it may seem to put our noses in the past, not all historians believe that we can easily learn deeper truths about the past by resurrecting such scents. Smith, of the University of South Carolina, has argued that while we can produce smells of the past, “what you can’t do is consume them in the same way.”

The Jorvik Viking Center in York, England, is famous for taking visitors right into the smells of Viking life as part of its re-created Viking village. Dale Air, an environmental scenting company, imbued the center’s exhibits with smells that would have been present at the time - right down to the odor of a fish market and a latrine. But to Smith, it doesn’t really help us understand what the past was like. The smell of a Viking latrine may disgust us, but it doesn’t tell us how the Vikings experienced it.

Smith believes that studying smell and other senses is important, but they must be put into context. There are countless examples of how circumstance influences the way we perceive smells; for instance, wintergreen became popular in chewing gum and toothpaste in the United States after World War II, but to the British, the smell would have evoked sickness, since it was used in ointments to treat the wounds of soldiers. If we don’t understand these meanings, we’re just smelling the past as we would now - not as people did at the time.

But this is true of any historical experience: A Renaissance painting means something far different to us than it did to people at the time, yet we still recognize its value. Just as we can place the clothing, settings, and poses of old photographs in historical context, we can also understand the larger meaning of our perfumes, laundry detergents, and ambient odors of civilization and nature. Doing so could enrich the way we experience the past by engaging parts of our brain more directly than vision can.

As a chemical sense, smell has always been a visceral connection to the here and now. For people today, adding smells to our compendium of records and artifacts could stretch that visceral connection in new ways. And looking to the future, it offers us an unusual chance to transmit the legacy of everyday life - whether it’s the smell of a vegetable garden, a day at the beach, or just a whiff of a circa 2011.