What the Mississippi delivers to the language

The Mississippi River has a stature in American English commensurate with its size. Not only did it give one of our best writers his pseudonym — Samuel Clemens took the name Mark Twain from a riverboatman’s cry — but it also gave rise to a number of other words and phrases, from poetic names such as “Father of Waters” and the “Queen of Floods” to colorful terms like blackleg (a riverboat card cheat), showboat, sell down the river, and all alligator (someone notably strong or skilled).

The Mississippi is also linked to another, equally large body of language — one that only surfaces when the river overflows its natural boundaries and forces itself into places where it wasn’t expected before. This is the jargon of river control, which took a sudden, and unfortunate, leap into the spotlight recently.

The Mississippi is not just the river of “Huck Finn”: It’s a tremendously important and much-regulated commercial channel with an immense engineering apparatus to keep it under control. The failure — or potential failure — of some previously hidden complex technological system always reveals the language of that system to the general public: Remember the O-rings of the Challenger explosion? With the opening of the Morganza Spillway two weeks ago — for the first time since 1973 — these potamological (relating to the scientific study of rivers) words have spilled into our vocabularies, too.

The spillway (“a path designed to take away overflow safely”) was opened because the waters of the Mississippi are cresting at record highs, with a flow rate of 625,000 cubic feet per second, leading to worries that the river would overtop the levees that hold it back. The amount of water that the Army Corps of Engineers expects to flow past the barriers is the inundation estimate. Should the levees fail, especially on the west bank of the river, the Mississippi could leave the path it takes now — the one on which massive industries and the city of New Orleans both depend — and be captured by the Atchafalaya River, which offers it a faster, steeper shortcut to the Gulf of Mexico.

What’s stopping that from happening is the grandly named Old River Control Structure, a system of floodgates that has been keeping the Mississippi more or less in its place since 1963, despite Mark Twain’s assurance (in “Life on the Mississippi”) that “ten thousand River Commissions, with the mines of the world at their back, cannot tame that lawless stream, cannot curb it or define it, cannot say to it ‘Go here’ or ‘Go there,’ and make it obey.”

Despite the confident solidity of the system’s name, the levees are subject to any number of problems: there’s the crevasse, any crack or breach in a levee, and sand boils, where river water seeps up into the ground behind the levee. (When the waters are low, the silty area between the waterline and the levee is known as the river batcher, and the part of the levee above the waterline is called the freeboard.) Levees and flood control structures (and bridges) can suffer from scour holes, when the pressure of the water flow eats away at their foundations; scour can be combated with riprap, usually large granite or limestone rocks or concrete rubble piled against the structure to lessen the abrading force of the water. In addition to the major (sometimes called mainline) levees, there are also potato ridge levees (made of packed dirt, and looking like, well, good places to plant potatoes) and ring levees (levees completely surrounding a structure, and themselves surrounded by water). The dirt used to make these extra levees can come from borrow pits, which are just what they sound like.

Once the water is past the flood control structure it expends some of its excess energy in a stilling basin, eventually flowing downstream, and in the case of the Mississippi, dividing itself into distributaries, branches of the river that don’t rejoin the main stream. (When a river no longer feeds a distributary, the abandoned distributary can turn into something more familiar-sounding: a bayou.) Those along other waterways are also affected by the extra water from the Mississippi — especially by backwater flooding, which is what happens when the tributaries that would normally add their water to the main channel can’t get a drop in edgewise, and back up.

When the waters of the Mississippi have receded, these words will be left washed up on our shores. We may think of rivers as pure, untrammeled nature, but these technical words give us a window into something else as well: that as much as the Mississippi is still a force of nature, it is also a carefully managed technological system; a chaotic liquid highway, constantly in flux. 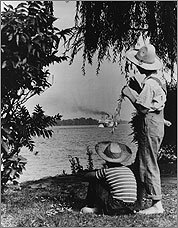