A historian traces our long, complicated relationship with mechanical beings 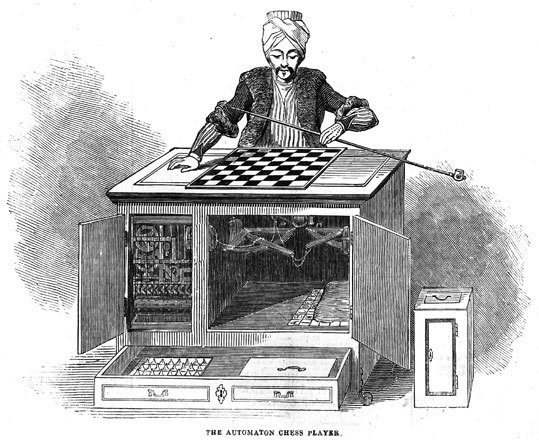 Last week, two human men played ”Jeopardy!” against a sophisticated computer named Watson. The exhibition, like Deep Blue’s chess matches against Garry Kasparov in the late 1990s, was an instantly iconic demonstration of a seemingly impossible technological achievement: a machine that can actually understand and interpret language, including the show’s typical pun-laden clues.

Over three days of competition, Watson casually demolished its human rivals with answers delivered in a polite, synthetic male voice. As it did, IBM’s mechanical quiz show contestant became the most tangible entry in a long historical line of automata — both real and hypothetical — dating back to the ancient Greeks.

In a new book, ”Sublime Dreams of Living Machines,” University of Missouri-St. Louis history professor Minsoo Kang traces the complicated relationship humans have had with the mechanical man, as a symbol and an actual entity, throughout European history. We’re fascinated by machines that can imitate humans, he says, but also feel an existential discomfort around them--an uneasiness that stems from their ability to obscure what seems like a fundamental truth of the universe, the line between the living and the inanimate.

Back in the late 1700s and early 1800s, Europeans were enthralled by a spectacle put on by a distant ancestor of Deep Blue and Watson: a mechanical mannequin that appeared to play chess against human opponents to the amazement of a rapt public. All but ”a few gullible commentators” realized that the contraption was not a sentient being, Kang writes, and rather delighted in the execution of a novel parlor trick.

Today, that delight is mixed with nagging fear. Watson, along with the countless other artificially intelligent machines that populate modern life, is no trick. Unlike the automata that preceded it, Watson can successfully mimic natural human speech and thought patterns, two of the traits that have always separated us from animals--and even the most advanced inanimate machines. That primal distinction between man and technology is blurrier than it ever has been.

Kang spoke with Ideas from his St. Louis home.

IDEAS: What’s the earliest example of an automaton that you found?

KANG: There’s sort of the legendary ones, where we don’t know if they really existed or not. There’s a story about an ancient Greek philosopher, who was a friend of Plato’s, called Archytas. He was reputed to have created a bunch of toys for kids, including a little bird that could fly around, but the first real documented evidence that we have of somebody in ancient times designing [an automaton] — there’s a guy named Hero or Heron of Alexandria, and he lived around the first century. And we have two of his manuals, engineering manuals, and there’s plenty of examples there where you see these little creatures moving around and so on, using steam technology, using fire. In all probability, he probably wasn’t the first, because there are other records here and there of something similar being made.

IDEAS: Why do you think humans have been fascinated with the concept of robots and mechanical men?

KANG: That’s one of the reasons why I took on this rather large project--because I realized that this is an obsession that’s been going on for a very long time, and there are, I think, many levels in which you could answer the question....For instance, the machine was used as a device with which to ponder the very nature of the universe: Is the universe like a machine? And a lot of people during the Scientific Revolution and Enlightenment thought so. And they also conceived the state as a machine, and they also thought of the human body as a kind of automaton built by God. So intellectually speaking, I think it becomes a very fascinating heuristic device to ponder our own nature: In essence, what are we? In essence, what is the universe? In essence, what is the government?

IDEAS: How has the perception of the machine changed over time? How did we go from fascination to unease — from the chess-playing robot to today?

KANG: If you walked up to an 18th-century person, and uttered the word ”machine,” the first thing that is likely to come into his head is some kind of a clock....Those 18th-century machines were designed to be not only useful, but also beautiful. Those things were made to be very pretty. But if you went to a mid-19th-century person and uttered the word ”machine,” the first thing that person is likely to think of is some kind of a steam-driven device, like a locomotive, or a machine in a factory. No longer pretty, no longer dainty, no longer aesthetic, but just big and powerful and probably noisy and dirty....We do now live in an age when machines could completely wipe out humanity, and I’m not talking about some science-fiction rise of the machines of the future, but I’m talking about nuclear weapons. And starting from World War I, when countless soldiers witnessed what looked like automata attacking them--like tanks and so on--from then on, the darker tone that’s attached to robots is something that is still with us today.

IDEAS: You use the word ”sublime” to describe lifelike human robots. What’s the significance of that term?

KANG: Edmund Burke, in his essay on the sublime, tried to ponder this very peculiar phenomenon. He said that things that really disturb us and which strike terror in our hearts — like, say, for instance a wild animal, like a tiger, or the possible appearance of a ghost, or an armed criminal — that if we encountered them in life, it would strike terror in our hearts, because they could endanger our lives. But he thought that it was really weird that when you put those things that make us afraid and put them under controlled parameters--like, say, the tiger in a zoo or the ghost or the criminal in a novel or in theater — it creates this very weird sense of pleasure, of being able to get yourself close to a thing that would cause us terror. But at the same time we enjoy it because it actually cannot cause us terror. That was, in essence, his description of what the feeling of the sublime was. And I thought this was very, very apt in terms of getting to the essence of what fascinates [us] about automata.

IDEAS: What’s your gut reaction to a robot like Watson competing on ”Jeopardy!” or Deep Blue playing chess against a human? Do you find that creepy or enchanting?

KANG: I have those two contradictory feelings going on at the same time, and I have a feeling that it goes for most people as well. That’s why, to me, the whole subject of the automaton is so interesting — if we as a culture only felt fear, then we wouldn’t be entertained by these things. We would say, ”That’s horrible, don’t do that, we don’t know where that’s going to lead.” But even as a lot of people, I’m sure, watching ”Jeopardy!” would feel a kind of visceral horror at it, I bet a lot of people watch because they just can’t help themselves. It’s so damn interesting....For us to properly understand the nature of the automaton, we have to recognize that when we come face to face with this object that seems to traverse the boundaries between the living and the dead, we feel these contradictory emotions simultaneously.

Alex Spanko is a freelance writer, originally from Long Island, who now lives in Jamaica Plain. (Getty Images) December 1928: An automatic man with machinery workings of the body.
Your comment is subject to the rules of our Posting Policy
This comment may appear on your public profile. Public Profile FAQ