The year in language 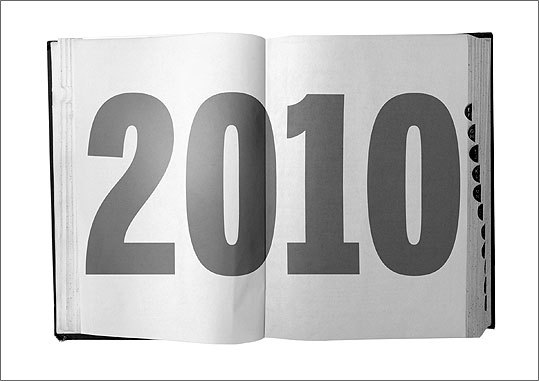 I know, it’s getting a little late to reminisce about 2010. But besides being a new year, it has also been about a year since I started writing about language for Ideas (thanks again to Jan Freeman for sharing this column!), and I thought it would be fun to look back at a year’s worth of the best and worst stories about words.

From a lexicographer’s point of view, the best language story of 2010 was the recent paper in Science about “culturomics.” The authors define this term as “the application of high-throughput data collection and analysis to the study of human culture,” but what they literally did, working with Books, was take the full text of a huge number of books — about 4 percent of all titles ever published — and crunch the words as data, on the model of the Human Genome Project.

One amazing finding: They estimated “that 52% of the English lexicon — the majority of the words used in English books — consists of lexical ‘dark matter’ undocumented in standard references.” They found vast quantities of words like aridification, slenthem (a musical instrument), and deletable, none of them in normal dictionaries. Time to get crackin’, fellow lexicographers!

Along with their study came a public release of billions of sorted phrases, ranging up to five words in length, and a tool that allows any user to chart how common specific words are over time (it’s at www.ngrams.googlelabs.com). As fascinating as they are, these graphs have also led to lots of great discussion about one big thing missing from the data: the context in which the words are used. When we use the word class, are we talking about social rank (“middle class”) or school (“geometry class”)? That kind of analysis will have to wait for a different tool.

The extended news cycle of Sarah Palin’s use of refudiate was another highlight of 2010’s language reportage: On July 14, she used the word (a blend of refute and repudiate) in a segment on Fox News; a week later she used it in a tweet about the planned Islamic center near Ground Zero (“Peaceful Muslims, please refudiate”). A few hours later, after the disappearance of the original tweet and a lot of talk about the unusual blend, Palin tweeted again: “Shakespeare liked to coin new words too. Got to celebrate it!” (It’s true — experts estimate there are at least 1,500 words first known to be used by Shakespeare, so if anything Palin has some catching up to do.) Her coinage generated some excellent analysis from both Mark Liberman at the Language Log blog (who found earlier examples of the word in several places, including in a 1984 science fiction story by John Sladek) and from Ben Zimmer, writing on VisualThesaurus.com, who was able to date its use back to at least 1925. In November the New Oxford American Dictionary named refudiate the word of the year for 2010.

In other new-words news, Oxford English Dictionary category, it’s wonderful that the OED now includes an entry for eggcorn (a word beloved of language enthusiasts, an eggcorn is a “mistake” that has its own kind of internal logic, like eggcorn for acorn, or expatriot for expatriate).

The dumbest story of 2010, wordwise, has to be the Global Language Monitor’s affirmation in late December that WikiLeaks is a for-real darn-tootin’ word of English. Calling WikiLeaks a “new media and high technology” company (it’s not; it’s a nonprofit organization), GLM asserts that the 300 million “citations” it has found for the name means that WikiLeaks is, by sheer force of numbers, officially an English word. Note that GLM didn’t make any assertions about whether WikiLeaks actually functioned as a word (for example, pointing out instances of people using WikiLeaked as a verb, which would be a reasonable argument), and didn’t give any instances of the citations used to make their determination. I’m all in favor of discussing how names become words, but it seems absurd to declare a “word” based purely on uncritical beancounting. By the same standard, the misspelling seperate, the number 101, and “Little Fockers” should all be considered English words now.

A much better story, in the real-language-scientists-finally-getting-some-respect department, is that two linguists won MacArthur Foundation “genius grants” this year: Jessie Little Doe Baird, whose project in Mashpee is working to revive the language of the Wampanoag Nation, and Carol Padden, a professor at the University of California San Diego who researches the structure and evolution of sign languages.

The best pronunciation story of the year was surely the air-travel-disrupting Icelandic volcano Eyjafjallajökull (if you need a refresher, it’s pronounced, roughly, AYE-yah Fyat-lah Yir-kutl). And the best naming story? That would be the case of (we must say mild-mannered, whether he is or not) Richard Smith, 41, of Carlisle, England, who changed his name to Stormhammer Deathclaw Firebrand. Before the name change (as reported in May by the UK paper Metro) Mr. Smith was known to his friends as “Spiff.”

And it’s not really a news story, exactly, but if you have a minute to search online for “Stephen Fry kinetic typography language” you will not be disappointed by the video you find. Trust me.

All in all, 2010 was a great year for stories about words and language — here’s hoping 2011 is even better!