The 'eggcorn' has its day 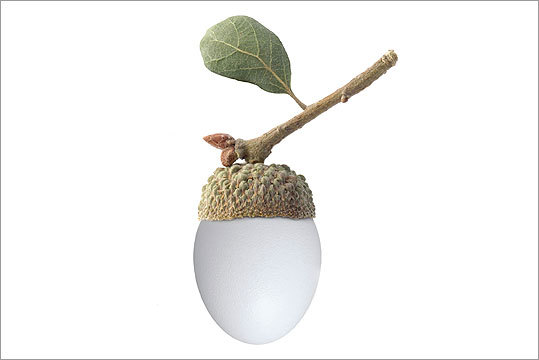 Over the past 10 days, language bloggers have been exchanging virtual high-fives at the news of an honor bestowed on one of their coinages. In its most recent quarterly update, the Oxford English Dictionary Online announced that its word-hoard now includes the shiny new term eggcorn.

An eggcorn, as regular readers of this column may recall, is — well, here’s the official new definition: “an alteration of a word or phrase through the mishearing or reinterpretation of one or more of its elements as a similar-sounding word.” If you write “let’s nip it in the butt” (instead of “bud”) or “to the manor born” (instead of “manner”), you’re using an eggcorn.

The term derives from “egg corn” as a substitution for “acorn,” whose earliest appearance comes in an 1844 letter from an American frontiersman: “I hope you are as harty as you ust to be and that you have plenty of egg corn bread which I can not get her and I hop to help you eat some of it soon.”

Why would eggcorn (as we now spell it) replace acorn in the writer’s lexicon? As the OED editors comment, “acorns are, after all, seeds which are somewhat egg-shaped, and in many dialects the formations acorn and eggcorn sound very similar.” (And, like corn kernels, acorns can be ground into meal or flour.) This coinage came to the attention of the linguists blogging at Language Log in 2003, and at the suggestion of Geoffrey Pullum, one of the site’s founders, it was adopted as the term for all such expressions.

Eggcorns needed their own label, the Language Loggers decided, because they were mistakes of a distinct sort — variants on the traditional phrasing, but ones that still made at least a bit of sense. “Nip it in the bud,” for instance, is a horticultural metaphor, perhaps not so widely understood as it once was; the newer “nip it in the butt” describes a different strategy for getting rid of some unwelcome visitation, but it’s not illogical. Hamlet said he was “to the manner born,” but the modern alteration, “to the manor born,” is also a useful formula.

And because they make sense, eggcorns are interesting in a way that mere disfluencies and malapropisms are not: They show our minds at work on the language, reshaping an opaque phrase into something more plausible. They’re tiny linguistic treasures, pearls of imagination created by clothing an unfamiliar usage in a more recognizable costume.

Even before the eggcorn era, most of us had heard (or experienced) pop-song versions of the phenomenon, like “’Scuse me while I kiss this guy” (for Jimi Hendrix’s “kiss the sky” line), but these have had their own label, mondegreen, for more than half a century. The word was coined in 1954 by Sylvia Wright, in commemoration of her mishearing of a Scottish ballad: “They have slain the Earl o’ Moray/ And laid him on the green,” went the lament, but Wright thought the villains had slain the earl “and Lady Mondegreen.”

Then there are malapropisms, word substitutions that sound similar but make no sense at all. They’re named for Mrs. Malaprop, a character in the 1775 play “The Rivals,” whose childrearing philosophy illustrates her vocabulary problem: “I would by no means wish a daughter of mine to be a progeny of learning....I would have her instructed in geometry, that she might know something of the contagious countries.”

And when the misconceived word or expression has spread so widely that we all use it, it’s a folk etymology — or, to most of us, just another word. Bridegroom, hangnail, Jerusalem artichoke — all started out as mistakes.

But we no longer beat ourselves up because our forebears substituted groom for the Old English guma (“man”), or modified agnail (“painful nail”) into hangnail, or reshaped girasole (“sunflower” in Italian) into the more familiar Jerusalem.

The border between these folk-etymologized words, blessed by history and usage, and the newer eggcorns is fuzzy, and there’s been some debate already at the American Dialect Society’s listserv, ADS-L, about whether the distinction is real. Probably there is no bright line; to me, “you’ve got another thing coming” and “wile away the hours” are eggcorns — recent reshapings of expressions I learned as “another think” and “while away” — but to you they may be normal.

But we face the same problem in deciding which senses are valid for everyday, non-eggcornish words. When does nonplussed for “unfazed” or enormity for “hugeness” become the standard sense? We can only wait and see; the variants may duke it out for decades, but if a change takes hold, the battle will one day be forgotten.

The little eggcorn is in the same situation: It’s struggling to overcome its mixed-up heritage and grow into the kind of respectable adulthood enjoyed by the Jerusalem artichoke. We’re not obliged to help it along, but while it’s here, we might as well enjoy its wacky poetry.