How animals made us human

What explains the ascendance of Homo sapiens? Start by looking at our pets. 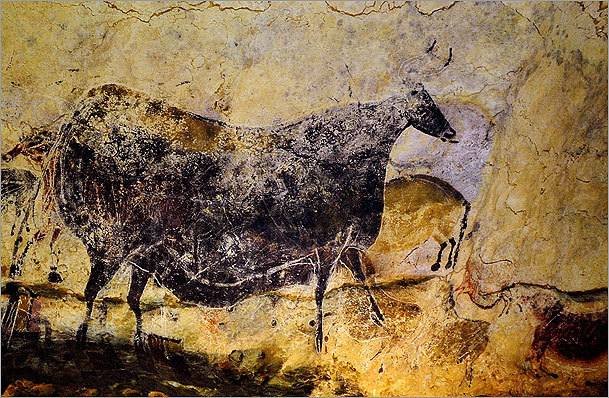 (Pierre Andrieu/AFP/Getty Images) A prehistoric painting of a bull at Lascaux in southwestern France.
By Drake Bennett Globe Staff / September 12, 2010

Who among us is invulnerable to the puppy in the pet store window? Not everyone is a dog person, of course; some people are cat people or horse people or parakeet people or albino ferret people. But human beings are a distinctly pet-loving bunch. In no other species do adults regularly and knowingly rear the young of other species and support them into old age; in our species it is commonplace. In almost every human culture, people own pets. In the United States, there are more households with pets than with children.

On the face of it, this doesn’t make sense: Pets take up resources that we would otherwise spend on ourselves or our own progeny. Some pets, it’s true, do work for their owners, or are eventually eaten by them, but many simply live with us, eating the food we give them, interrupting our sleep, dictating our schedules, occasionally soiling the carpet, and giving nothing in return but companionship and often desultory affection.

What explains this yen to have animals in our lives?

An anthropologist named Pat Shipman believes she’s found the answer: Animals make us human. She means this not in a metaphorical way — that animals teach us about loyalty or nurturing or the fragility of life or anything like

that — but that the unique ability to observe and control the behavior of other animals is what allowed one particular set of Pleistocene era primates to evolve into modern man. The hunting of animals and the processing of their corpses drove the creation of tools, and the need to record and relate information about animals was so important that it gave rise to the creation of language and art. Our bond with nonhuman animals has shaped us at the level of our genes, giving us the ability to drink milk into adulthood and even, Shipman argues, promoting the set of finely honed relational antennae that allowed us to create the complex societies most of us live in today. Our love of pets is an artifact of that evolutionary interdependence.

“Our connection with animals had a very great deal to do with our development,” Shipman says. “Beginning with the adaptive advantage of focusing on and collecting information about what other animals are doing, from there to developing such a reliance on that kind of information that there became a serious need to document and transmit that information through the medium of language, and through the whole thing the premium on our ability to read the intentions, needs, wants, and concerns of other beings.”

Shipman’s arguments for the importance of “the animal connection,” laid out in an article in the current issue of Current Anthropology and in a book due out next year, draw on evidence from archeological digs and the fossil record, but they are also freely speculative. Some of her colleagues suggest that the story she tells may be just that, a story. Others, however, describe it as a promising new framework for looking at human evolution, one that highlights the extent to which the human story has been a collection of interspecies collaborations — between humans and dogs and horses, goats and cats and cows, and even microbes.

Shipman, a professor of biological anthropology at Pennsylvania State University, draws together the scattered strands of a growing field of research on the long and complex relationship between human and nonhuman animals, a topic that hasn’t traditionally warranted much scholarly discussion but is now enjoying a surge of interest. The field of so-called human-animal studies is broad enough to include doctors researching why visits by dogs seem to make people in hospitals healthier, art historians looking at medieval depictions of wildlife, and anthropologists like Shipman exploring the evolution and variation of animal domestication. What they all share is an interest in understanding why we are so vulnerable to the charms of other animals — and so good at exploiting them for our own gain.

The traits that traditionally have been seen to separate human beings from the rest of the animal kingdom are activities like making tools, or the use of language, or creating art and symbolic rituals. Today, however, there is some debate over how distinctively human these qualities actually are. Chimpanzees, dolphins, and crows create and use tools, and some apes can acquire the language skills of a human toddler.

A few anthropologists are now proposing that we add the human-animal connection to that list of traits. A 2007 collection of essays, “Where the Wild Things Are Now,” looked at how domesticating animals had shaped human beings as much as the domesticated animals themselves. Barbara King, an anthropologist at the College of William & Mary, published a book earlier this year, “Being With Animals,” that explores the many ramifications of our specieswide obsession with animals, from prehistoric cave art to modern children’s books and sports mascots. King’s primary interest is in the many ways in which myths and religious parables and literature rely on animal imagery and center on encounters between humans and animals.

“[W]e think and we feel through being with animals,” King writes.

Shipman’s argument is more specific: She is trying to explain much of the story of human evolution through the animal connection. The story, as she sees it, starts with the human invention of the first chipped stone tools millions of years ago. Shipman, who specializes in studying those tools, argues that they were an advance made for the express purpose of dismembering the animals they had killed. The problem early humans faced was that even once they had become proficient enough hunters to consistently bring down big game, they had the challenge of quickly getting the meat off the corpse. With small teeth and a relatively weak jaw, human beings couldn’t just rip off huge chunks, it took time to tear off what they needed, and it rarely took long for bigger, meaner predators to smell a corpse and chase off the humans who had brought it down.

Early chopping tools sped up the butchering process, making hunting more efficient and encouraging more of it. But this also placed early humans in an odd spot on the food chain: large predators who were nonetheless wary of the truly big predators. This gave them a strong incentive to study and master the behavioral patterns of everything above and below them on the food chain.

That added up to a lot of information, however, about a lot of different animals, all with their various distinctive behaviors and traits. To organize that growing store of knowledge, and to preserve it and pass it along to others, Shipman argues, those early humans created complex languages and intricate cave paintings.

Art in particular was animal-centered. It’s significant, Shipman points out, that the vast majority of the images on the walls of caves like Lascaux, Chauvet, and Hohle Fels are animals. There were plenty of other things that no doubt occupied the minds of prehistoric men: the weather, the physical landscape, plants, other people. And yet animals dominate.

The centrality of animals in that early artwork has long intrigued anthropologists. Some have suggested that the animals were icons in early religions, or visions from mystical trances. Shipman, however, argues that the paintings serve a more straightforward function: conveying data between members of a species that was growing increasingly adept at hunting and controlling other animals. Lascaux, in this reading, was basically primitive Powerpoint. The paintings, Shipman points out, are packed with very specific information about animal appearance and behavior.

“It’s all about animals,” Shipman says. “There are very few depictions of humans and they’re generally not very realistic. The depictions of animals are amazing, you can tell this is a depiction of a prehistoric horse in its summer coat, or that this is a rhino in sexual posture.”

This storehouse of knowledge eventually allowed humans to domesticate animals. Evidence from early human settlements suggests that wolves were domesticated into dogs more than 20,000 years before people first domesticated plants. These new companion animals — not only dogs but eventually horses, camels, cows, goats, sheep, pigs, and others — in essence allowed human beings to appropriate a whole new set of abilities: to be better hunters, to kill off household pests, to haul goods, pull plows, create fertilizer, and protect homes against intruders. Not to mention the food and raw materials their bodies yielded up. Of course, the domesticated animals benefited, too: Human dependence on them ensured their survival and spread, even as some of their wild cousins were hunted to extinction.

The great value that was gained from these “living tools,” as Shipman calls them, also meant that people with a particular interest in animal behavior, and who were especially acute about observing, predicting, and controlling it, were more likely to thrive in early human societies and to have more offspring. To the extent that there was a genetic component to these skills, Shipman argues, it spread. Just as humans selected for certain traits in domestic animals, those same animals were unconsciously shaping their domesticators right back.

“Domestication was reciprocal,” Shipman writes in her Current Anthropology article. And our weakness for pets, she suggests, may be a vestige of that bilateral domestication.

Shipman readily admits that what she’s proposing is a hypothesis, and she hopes other scholars will help to flesh it out. So far, the reception has been mixed. Other researchers exploring the origins of language and art are reluctant to ascribe it to something as limited as the predators and prey early humans faced — the need to convey information about other human beings, for example, could have been just as important in spurring the development of language, if not more. Anthropologists like Manuel Dominguez-Rodrigo of Spain’s Complutense University of Madrid disagree with Shipman that early tool use arose to deal with dead animals; it’s more likely, he argues, that the first stone tools were used to process plants.

And it may be, too, that we find puppies cute not because of some innate desire to domesticate wild animals, but simply because puppies share some of the features — big eyes, clumsy movements, stubby limbs — that human babies have.

Still, for scholars of human-animal studies, the ambition and scope of Shipman’s argument are good in and of themselves, throwing into relief the ways that our own development has made us one of the world’s great symbiotic species, thriving through a set of partnerships with other animals.

Shipman’s argument “is radical to the degree that it really puts front and center the animal-human bond in a way that it hasn’t been before,” says King. “It’s not just background noise — yeah we hunted them, yeah we lived with them, yeah we ate them — it truly shapes the human evolutionary trajectory. That seems to me a really good thing to be doing.”