How closely can a building emulate nature? 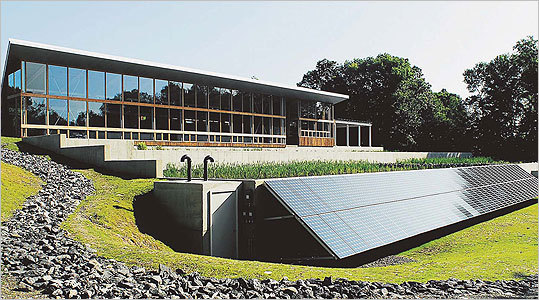 Buildings, in many ways, represent the opposite of nature. From a modest suburban house to the most majestic skyscraper, a building signals the presence of people in a place, differentiating human spaces from their surroundings. The built environment consists of organized, inert structures that contrast with the wildness, vitality, and constant change of the natural world.

Buildings clash with nature in another sense, too — constructing and occupying them takes a substantial toll on the environment. In the United States, the construction industry is responsible for much of the waste that ends up in landfills. The use of buildings — consider the lights, the elevators, the air conditioning — accounts for a healthy fraction of the country’s electricity consumption and carbon dioxide emissions.

In recent years, lower impact “green buildings” have crept up in popularity. But a new movement believes that these measures have not gone nearly far enough — that even today’s ecoconscious apartments and offices produce waste and greenhouse gases, while merely scaling back the damage. What we need to do, according to the architects and scientists driving this movement, is fundamentally rethink the concept of a building.

Sometimes called “biomimetic” or “regenerative” architecture, this approach applies insights from nature to the built environment, and seeks to blur the distinction between the two. In some cases, this means mimicking specific functions of organisms or their habitats. In other cases, the emulation is more general: conceiving of buildings as closed-loop ecosystems that, like a forest or a savanna, draw their energy from the elements and produce no net waste — and perhaps even improve the surrounding environment.

“I see it as a complete game-changer,” says Eden Brukman, vice president of the International Living Building Institute. Brukman’s organization runs the Living Building Challenge, a certification program in which the essential goal is to design buildings that function like ecosystems. One objective, she says, is “to get people to start to think differently about how we approach the built environment. How would nature solve these problems?”

This movement is still young, with few actual buildings completed and much research yet to be done. Not all of its ideas may turn out to be practical. But it has recently generated considerable interest, with discussions of the topic among the most popular at green building conferences and classes on offer at a number of architecture schools, suggesting it could become a significant force in the field.

According to its proponents, this approach has the potential to be vastly more ecologically sustainable than current building practices, even those dubbed green, and they see a profound shift in this direction as crucial for architecture, not to mention the planet. Ultimately, they raise the prospect of a future where the built environment works in a radically different way — not as a foil for nature, but as seamlessly integrated with it as possible.

Architecture didn’t always diverge so sharply from nature. As Jason McLennan, chief executive of the International Living Building Institute, has noted, pre-modern dwellings, such as igloos in Alaska and adobe structures in the Southwest, boast many of the virtues this movement is calling for. They use local materials; they moderate indoor temperature simply through their structure; and they have little impact on the environment. These buildings arguably have more in common with a bird’s nest or a beehive than with today’s high-rises.

Eventually, of course, technological advances led to very different sorts of buildings. The influential modernist architect Le Corbusier called houses “machines for living in” nearly 90 years ago, and that has served as a dominant metaphor ever since. Buildings have become highly artificial, voracious entities that use astounding amounts of water and electricity every day. And increasingly, buildings are constructed throughout the world without much deference to local conditions: Similar tract housing can be found in diverse parts of the United States; steel-frame office towers rise from every continent’s metropolises. The logic is that buildings create their own environments — these days materials can be transported from anywhere, and sophisticated HVAC systems can achieve any desired indoor temperature.

But in the past 15 years or so, another idea has begun to gain currency: Why not take cues from organisms that have thrived in the architecture’s setting? In 1996, a landmark project was completed: the Eastgate Centre, a large office building and mall in Harare, Zimbabwe, designed by architect Mick Pearce. Modeled after termite mounds found in the region, the building has no air conditioners, yet stays cool through a ventilation system inspired by nature. Termites perpetually dig (and plug) holes to catch breezes and modulate the temperature within their mounds. Using fans, vents, and funnels, the Eastgate Centre mimics this system. It uses 10 percent of the energy of buildings of similar size, and was estimated to save $3.5 million on energy in the first five years of operation.

This building is an example of what came to be known as “biomimicry.” The idea isn’t specific to architecture: In a 1997 book, science writer Janine Benyus argued that in nearly all areas of human endeavor, it was instructive to ask what nature would do in trying to solve problems. From emulating prairies in agriculture to imitating leaves to capture solar energy, the book chronicled efforts underway to capitalize on nature’s genius. Benyus later established two organizations — the Biomimicry Guild and the Biomimicry Institute — to promote these goals.

Until recently, biomimicry has been slow to catch on in architecture. (Architects distinguish between biomorphism — borrowing the forms and aesthetics of nature — and true biomimicry, which looks to underlying principles and may not bear an obvious visual resemblance to the original.) But in the past few years, a number of architects, most inspired by Benyus’s work, have taken a keen interest and are currently working on biomimetic projects.

The global architecture firm HOK has established a collaborative relationship with the Biomimicry Guild, working with its biologists. Plans for a project in India, to design a city, include rooftops that imitate the “drip-tip” structure of a local fig leaf; this structure encourages the rapid runoff of water, essential during monsoon season. British architect Michael Pawlyn is working on a greenhouse in the Sahara desert that desalinates seawater, inspired by the Namib Desert beetle, which manages to survive by catching water droplets from fog on its shell and funneling them to its mouth.

“Some people when they hear about this think it sounds too good to be true,” says Pawlyn. “But the example of the beetle shows that it is possible to harvest water in the desert.”

Biomimicry is not automatically ecofriendly; famous examples from outside architecture include Velcro (modeled after plant burrs) and the airplane. But the practitioners of biomimetic architecture aim to borrow from nature in a way that maximizes efficiency and reduces impact. By the same token, sustainability does not require copying mechanisms found in other species. But, as proponents are fond of pointing out, nature has benefited from a 3.8 billion-year R&D period, and neglecting all that wisdom strikes them as folly.

Another recent development also takes inspiration from nature, but in a different way. Rather than imitating particular organisms, this approach attempts to abide by the general principles of a natural system, giving as much back to the environment as it takes.

In a rain forest, say, water is recycled; energy comes from the sun; waste from one element becomes sustenance for another. The Living Building Challenge, formally launched in November 2006, is an effort to push architects to embrace these tenets. It establishes a high standard for extremely green buildings — even more ambitious than LEED, the certification system run by the US Green Buildings Council, which has already pushed architects toward greener designs.

A certified “living building” would interact with its surroundings in a benign, even beneficial, way. The specific requirements depend on the kind of project, but buildings can earn credit by supporting urban agriculture, encouraging car-free living, capturing rainfall for water, and using salvaged building materials. There is a “red list” of prohibited toxic materials, and no combustion is permitted to produce the building’s energy — generally energy must be solar, wind, or geothermal. The projects must be net zero energy, but some are trying to generate more energy than they consume — one aspires to produce three times as much as it uses.

In this sense, the buildings aim not only to minimize the negative effects of the built environment, but to convert them into positive influences, just as rain forests, as carbon sinks, are beneficial for the planet.

Brukman likens a living building to a flower: “A flower is rooted in place, but it collects all its own water for use and reuse, it operates efficiently, and it’s beautiful.”

About 70 projects have been registered, meaning that they will attempt to meet the standards (partial certification is also available). No buildings have yet achieved certification, because they must first be operational for a year. Five are currently occupied, and three are expected to be certified by the summer.

One of these is the Omega Center for Sustainable Living, an education center and waste-water treatment facility in upstate New York completed in May 2009. The waste water moves through treatment zones with various kinds of organisms — bacteria, fungi, algae, plants, fish, and snails. The water is thus effectively treated without the need for chemicals, and it will then be reused for irrigation and toilet water onsite. Another building projected to earn certification is a Seattle office, still in the design phase, where a photovoltaic array will cover the roof and the bathrooms will have compost toilets. The Seattle City Council passed legislation last December creating a pilot project for up to12 living buildings.

Of course, there are formidable obstacles to the widespread adoption of this approach. Cookie-cutter modern construction is popular because it’s cheap and functional, and the methods are widely familiar. Even the less ambitious LEED certification entails upfront costs that are prohibitive for many buildings. The requirements for living buildings are almost unfathomably demanding in the context of prevailing industry practices, and in the near term, only scattered showpiece buildings are likely to comply.

But architectural trends often grow from just a handful of influential buildings. And as architects and builders start to develop a knowledge base, proponents hope that their gold standard may eventually become simply standard — however quixotic that hope may now appear.

Grow your own bricks

For all its trailblazing, the Living Building Challenge isn’t even the leading edge of this line of thinking. A few architects take the idea of living buildings not as a metaphor but literally: They actually aim to incorporate life into buildings.

Ginger Krieg Dosier, an architecture professor at the American University of Sharjah in the United Arab Emirates, recently won a contest sponsored by Metropolis Magazine for a “bio-brick” that she “grows” from sand, urea, calcium chloride, and bacteria. The traditional process of making bricks is carbon-intensive, and she estimates that if her process entirely replaced that one, it could save 800 million tons of carbon emissions annually.

Alberto Estévez, a Spanish architect, is spearheading the use of bioluminescence in architecture. Using something called a Green Fluorescent Protein, which is found in a glowing jellyfish, Estevez has been working to illuminate spaces without electricity.

Another promising strategy is to enlist materials that will actively improve the environment. Rachel Armstrong, a teaching fellow at the Bartlett School of Architecture in the United Kingdom, is working with scientists to invent a paint that “fixes” carbon dioxide from the air. “The vision is to create a new design paradigm,” says Armstrong — ultimately, to “use buildings the same way we use plants.”