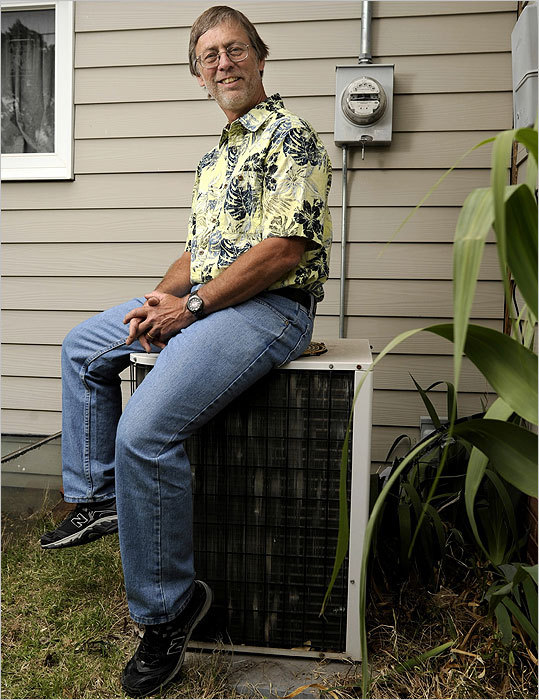 You know it’s coming: that summer day when it’s already sweltering at 7 a.m. The asphalt softens up, radiating heat in visible waves. Inside the car it’s even worse, the steering wheel almost too hot to touch. But after a couple of minutes on the road, the blast from the vents begins to turn cooler, drier, colder, and...ahhh.

As anyone who has endured an office without A/C or a poorly timed power outage at home can attest, climate control can be an essential part of staying sane through the summer. It puts the temperature in our hands: We decide if it’ll be a pleasant 75, or if a chilly 69 would yield a better night’s sleep.

Only, much more than we may realize, we ultimately don’t control the A/C. It controls us. Since its introduction early in the last century, air conditioning has altered the way homes and offices are constructed, where Americans live, and how they commute. In his new book ”Losing Our Cool: Uncomfortable Truths About Our Air-Conditioned World (and Finding New Ways to Get Through the Summer),” Stan Cox, an environmental and political writer, argues that this seeming necessity is becoming a far larger drain on our resources than we might think. Cooling costs in America dwarf heating costs; altogether, America uses as much power for air conditioning every year as the entire continent of Africa uses for everything. And as the rest of the world follows--India, especially, is a burgeoning market for A/C--no one knows what the consequences will be.

Cox suggests that we can wean ourselves off of air conditioning, spending more time outdoors, cooling people rather than spaces, and being willing to find comfort with a little less cold. Cox spoke to Ideas by telephone from his office at the Land Institute in Salina, Kan.

IDEAS: How did we get to this state of attachment to the air conditioner?

COX: There was a conversion from houses and office buildings that depended on natural ventilation. When the decision was made to incorporate air conditioning, a lot of the more expensive features of houses, heavier eaves and attic fans and so forth, heavier constructions, cross-ventilation, all of these things could be dispensed with, and you could have what Forbes magazine referred to as a ”TV-equipped hot box.” You could build houses with more features at a reasonable price and equipped with central air. And with office buildings you could make these big cubes where the very cheap interior space could be comfortable.

COX: At my workplace we’re building a new building, and we’re trying to make it energy efficient, so there was a big discussion about being able to open windows. And it was decided that there would need to be some automatic system since people wouldn’t be willing to do it manually.

IDEAS: Some of the hottest places in the United States, particularly Florida and the Sun Belt, are now among the most populous.

COX: Phoenix is going to reach some point where it just cannot exist in its present form, either from energy or water shortage or both.…I was in Phoenix and learned about the Hohokam civilization that existed there between 450 and 1450. So for 1,000 years there were lots of people living in what is now Phoenix. One reason they were able to do it was there was a lot more relief from the heat because there were rivers running all year, canals, and vegetation. Now there’s hardly any water, and the increase in population made possible by air conditioning has meant that it’s actually gotten much hotter in Phoenix. In the last 50 years, the temperature is up something like 7 degrees.

IDEAS: Why not just legislate increased efficiency of air conditioners?

COX: In the last 12 years, the efficiency of air conditioners was improved 28 percent, so that’s a pretty good. But the average air conditioned household used 37 percent more power for air conditioning during that time. A great deal of that increase has to do with the increase in square footage of newly constructed houses, and the continued conversion from room air conditioners to central air.

IDEAS: You have a number of examples in the book showing that as efficiency goes up, so does use.

COX: A friend of mine says that efficiency is like putting energy on sale, and what do you do when things are on sale? You buy more of it!

IDEAS: So if people will just make it colder and colder, where’s the hope of changing those habits?

COX: There’s a lot of interesting work in ”comfort research”...the one thing that I think has held the most interest is called the adaptive model of comfort, which says that the temperature range and humidity range that people tend to find comfortable isn’t a fixed range, as would be defined in various manuals, but that it depends on what temperatures people have been experiencing over the past 30 days. People not only like a warmer temperature range if they have been warmer recently, they also like variety.

IDEAS: Are there alternatives to air conditioners?

COX: For most people the key is to use air conditioning more efficiently, or less. I think the slickest thing, although it’s expensive, is to use solar power. You could do it simply by having enough photovoltaic panels to run a normal A/C, but there are also what are called absorption methods. They use the different boiling temperatures of liquids, water and lithium bromide and these other things, to use the sun’s heat to produce chilled water and circulate it through a building....Beyond that, there are some really good proposals and improved techniques for things like green roofs, where you have vegetation growing on a roof, which not only shades the roof but evaporation cools the roof.

IDEAS: What would you tell someone without access to this kind of technology?

COX: Some of the best techniques do involve air movement--that is, good old-fashioned fans. And a lot of people either remember or still use stuff like whole-house fans, which work really well once the temperature drops to suck cool air into a house. Or in drier climates the use of evaporative cooling technology, when there is an ample water supply. When you walk through the old neighborhoods of Phoenix you’ll see there’s an old evaporative or swamp cooler on top of nearly every house.

IDEAS: You did find people who were not fans of A/C.

COX: My favorite quote that I came across in reading and talking to people was a woman in Davis, Calif. She said, ”We don’t use the air conditioner because it makes it too hot outside.” There’s a double meaning there, in terms of impact and how this thing makes you feel. It’s really hard going from cold inside into the heat outside, and if we’re going to become more adaptable and resilient, and more heat tolerant, it’s the indoor climate rather than the outdoor climate that we need to be rethinking.

J. Gabriel Boylan is a writer living in New York.