Is this how Northern Ireland was supposed to turn out?

For the men who killed Kieran Doherty a few weeks ago, it must have felt like old times. They bound his hands, stripped him of his clothes, and put two bullets in his head. Then they dumped his body on the Braehead Road, outside Derry, near the border, a border separating Northern Ireland and the Irish Republic whose existence has been used to justify murder for the last 90 years.

His killers, men who call themselves the Real IRA because they think the real IRA sold out by ending its war, issued a statement, saying Doherty was “executed” because he was a drug dealer. In the housing projects of the Brandywell, a neighborhood on Derry’s Bogside that produced its fair share of Irish Republican Army men over the years, there were whispers that Doherty was a tout, an informer, the bane of Irish rebels for centuries. He may have been a pusher or a tout. He may have been neither. But he was certainly a victim of a conflict that was supposed to be over.

Beyond the tragedy for his family, and the 2-year-old girl who will grow up without a father, Kieran Doherty’s abduction and murder seemed hopelessly anachronistic. So, too, did the car bomb that blew up outside a courthouse in Newry, on the other side of Northern Ireland, two days before Doherty was murdered.

The Troubles, as the Irish quaintly call their civil wars, are finished, and Northern Ireland has been held up as a model in conflict resolution, one that has been applied to mediation efforts from the Basque country to Iraq. So why is there still an irredentist rump, still carrying on as if it’s 1972, reducing a complex dispute over power and equality and national allegiance to something as naively simplistic as Brits Out?

It could be the men who murdered Kieran Doherty look around and see that the supposedly new Northern Ireland looks suspiciously like the old one. It could be they see a society still so bitterly divided, still so deeply segregated, that they believe they can exploit historical animosities, that they can capitalize on an almost reflexive tendency among most people in Northern Ireland to view things along narrow sectarian lines, as “us versus them,” an “us” that remains largely defined by a combination of religion and national identity.

And they may have a point. While the vast majority of people in Northern Ireland have shown a willingness to not kill each other, they have been less enthusiastic about the prospect of actually living with each other. Northern Ireland remains very segregated, physically and psychologically. Most people live in neighborhoods that remain overwhelmingly populated by one of the two main traditions: Catholic nationalists, who aspire to unity with the Irish Republic, and Protestant unionists, who want to remain part of the United Kingdom.

In the wake of some civil wars, including America’s, the institutionalization of separate but equal is a natural consequence. But, as in the American experience, it is eventually recognized as being a corrosive, negative influence. And the difficulty of breaking down barriers, real and perceived, dogs other divided societies, including those in the former Yugoslavia.

In the 12 years that have passed since I lived in Ireland and chronicled the process that led to the Good Friday Agreement, effectively ending the Troubles, I’m always struck upon my annual visits to Northern Ireland by how segregated it remains, despite the near absence of politically motivated violence.

Not only is there an official ethos of separate but equal, but an infrastructure underpinning it. There are three times as many so-called peace lines — elaborate walls separating working-class neighborhoods — than there were at the height of the Troubles, 88 of them at last count.

I walked through Protestant housing projects in North Belfast and noticed many vacant apartments. On the other side of the peace line, the Catholic projects were overcrowded. But there is no attempt to move Catholic families into the vacant apartments because, as they say in Belfast, even the dogs in the street know there’d be riots.

With segregation the status quo, there is an enormous duplication of public services, such as schools, community centers, and health clinics. The Alliance Party, the only major political party that draws substantial numbers from both sides of the divide, estimates that duplication of public services costs more than $1 billion a year, this in a place the size of Connecticut with a population of less than 2 million.

But it’s more than money that Northern Ireland is losing. It is losing the very kind of people that might change things. Some are voting with their feet, others simply not voting at all. Voting participation, which surged in the optimism following the Good Friday Agreement, has slumped. The brain drain, which saw educated young people head to England and everywhere else, slowed after everything looked possible in 1998. But it has picked up again, as a new generation that grew up without widespread violence concludes that peace is nice but not everything. So much creativity, energy, and productivity, lost across the Irish Sea.

The reality is, despite the dramatic drop in violence and the disarming of the various paramilitary groups, most young people in Northern Ireland grow up apart from those of a different religion or national identity. There has been no attempt to dismantle the separate but equally funded Catholic schools run by the Catholic Church and so-called state schools run by secular civil servants, which are almost the exclusive domain of Protestants. The only trend that could be seen as remotely encouraging is more middle-class Catholics aspire to send their kids to the best Protestant schools. Integrated education, long touted as a way to bring the two traditions together at a young age, remains an idealistic option exercised by about only 5 percent of the population, the same percentage as when Northern Ireland was at war.

There has been no attempt to merge the two soccer associations on the island, so that players from the Irish Republic and Northern Ireland would play as one in international competitions, creating something that would unite not only Catholics and Protestants, but northerners and southerners.

So many people make their living off, and find their identity in, the status quo that there seems little interest in the self-interest of breaking down the walls that run, figuratively and literally, across the north of Ireland.

Maybe it’s asking too much too soon. Maybe, given the relatively small size of Northern Ireland, 12 years of relative peace and stability is not enough to erase 35 years of horrific violence and centuries of intense grievance.

But there is another side to that coin. As memories of violence fade, the strongest impetus to create a truly shared society could fade with them. The status quo becomes more acceptable, more entrenched. Reconciliation, which cements peace, is deferred.

But the way the politicians got to yes over policing betrayed just how little of a shared sense of Northern Ireland the two competing traditions have.

The Democratic Unionist Party, which represents most Protestants, acted as if the sky would fall if members of Sinn Fein, including supporters and even former members of the IRA, were to have a say in how the law is administered. In many post-conflict societies, the idea of former insurgents becoming part of the police and justice administrations is regarded as truly marking the end of the conflict. In Northern Ireland, which spiraled out of control in the late 1960s precisely because the police who cracked down on Catholic civil rights demonstrators were overwhelmingly Protestant and unionist, the idea of former IRA volunteers supporting an increasingly integrated police force should have been celebrated. Instead, the DUP demanded a quid pro quo: that Protestant fraternal organizations be allowed to stage highly provocative marches through Catholic areas where they are not wanted.

The normalization of policing was seen not as something good for all sides, but only one side. Ireland’s peacemakers have been hailed, deservedly so. But stopping the violence, while a monumental achievement, is not the same as creating an equal, shared society. It is not reconciliation. It is not, in itself, creating an “us” out of “us and them.”

Twelve years ago, in the heady days after the Good Friday Agreement was signed, I sat down for a pot of tea with the Belfast poet Michael Longley, and we talked about peace, about what his friend Seamus Heaney described as a time when hope and history rhyme. Longley was as optimistic about the deal as Heaney was.

“Sometimes I feel Irish,” Longley told me then. “Sometimes I feel British. Often I feel neither. The agreement allows me to feel more Irish, more British, and, just as importantly, more neither.”

When I spoke to Longley recently, he was rueful over the staying power of what he calls “tribal dances” masquerading as politics.

“I used to say it would take a generation,” Longley said. “But it will probably take decades. Any peace is better. Even a fragile peace. But there is something of a social apartheid. I’d like to think this is the beginning of the end.”

A few hours after Kieran Doherty’s body was dumped from a car, Michael Longley stood in a hall in Belfast and lent his name and voice to a nascent citizens initiative, The Platform for Change (www.platformforchange.net), which wants to address sectarianism and build bipartisan support for policies that benefit all people.

“There is no more challenging aspect of life in Northern Ireland than its deeply entrenched sectarian division and a wider culture of intolerance. For all the social transformations of recent decades, this distinguishing scar — symbolized by the Belfast ‘peace walls’ — has stubbornly remained and indeed may have become even more embedded,” the group’s manifesto said.

It may prove to be yet another idealistic populist movement, shunted aside by sectarian reality. But its honesty is refreshing.

Later, at home, Longley got a shot of optimism when he turned on his television and saw one of those images that, just a few years ago, no one could have imagined. Sinn Fein’s Martin McGuinness, the former IRA commander, now the deputy first minister of the local government, escorted the Rev. Ian Paisley, the fundamentalist preacher and former DUP leader, down the stairs at Stormont, once the seat of Protestant hegemony, as Paisley retired from politics.

“McGuinness had Paisley by the elbow,” Longley said, “and there was a gentleness about the whole scene I found very moving.”

It was a different scene, altogether, from Kieran Doherty’s naked body, lying in the darkness, in the middle of the road, in such a position, one police officer told me, that it looked like a macabre question mark.

Kevin Cullen, a Globe columnist, was the Globe’s bureau chief in Dublin and London, and covered the conflict in Northern Ireland for more than 20 years. 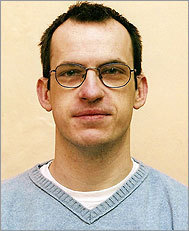 ( Photopress Belfast) Kieran Doherty, killed by men who call themselves the Real IRA because they think the real IRA sold out by ending its war, issued a statement, saying Doherty was “executed” because he was a drug dealer.
Your comment is subject to the rules of our Posting Policy
This comment may appear on your public profile. Public Profile FAQ