Elif Batuman’s fresh look at a forbidding body of literature 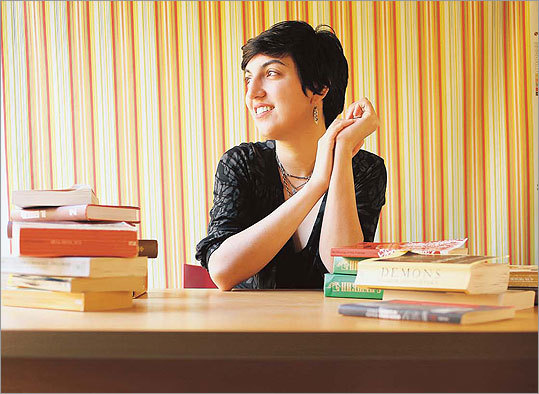 There are many reasons you might have put aside reading the great works of Russian literature. They’re long. They’re weighty, both philosophically and gravitationally. So much history, so many dachas and samovars. Also, lots of snow.

Elif Batuman, on the other hand, has spent her young career diving into them - both the works themselves, and the cultures and subcultures that they have engendered.

Batuman first won attention when her essay “Babel in California” appeared in a 2005 issue of the journal n+1. She described with subtle comic strokes a conference devoted to the early 20th-century Russian short story writer Isaac Babel, with scholars, translators, and eager graduate students and cameo appearances by Babel’s widow and daughters and two Chinese filmmakers intent on filming Babel’s “Red Cavalry.”

Since then, Batuman has traveled the world reporting on academics and enthusiasts passionately devoted to Russian works, from a scholar who teaches Batuman Old Uzbek poetry and fables to St. Petersburg historians puzzling over a contemporary ice castle built to commemorate an earlier folly built by the 18th-century empress Anna Ioannovna. These individuals search for the answers to life’s most crucial questions in a small canon of major novels, stories, and plays, often written in dire circumstances.

Batuman’s debut collection of essays, “The Possessed: Adventures With Russian Books and the People Who Read Them,” will be published in February by Farrar, Straus, and Giroux. For Batuman, the Russian classics are a prism through which we can examine our own lives, whose close study might just lead us toward unlocking what she describes as “the riddle of human behavior and the nature of love.”

Batuman currently teaches at Stanford University. A Turkish-American who was born in New Jersey and lives in San Francisco, she spoke with Ideas by Skype from Istanbul, where she was traveling.

IDEAS: What initially drew you to the study of Russian literature?

BATUMAN: The book that made me decide to go into Russian literature was “Anna Karenina,” which I first read in high school. The thing that appealed to me and constituted its Russianness for me was that it was simultaneously incredibly funny and sad. The English had very funny novels, but they weren’t exactly sad, except in the Dickensian, melodramatic sense, with, say, orphans being mistreated. They didn’t have Anna Karenina being run over by a train. French novels had genuine pathos, but their humor lay in a kind of cynicism. They didn’t make you laugh out loud, like in the scene when Oblonsky has to consult Karenin’s medium to find out whether Anna can get her divorce. German novels were all about romanticism and romantic compatibility and questions of how to live correctly - but they wouldn’t have a fatally important scene set among aristocrats at a ball or the opera. And I loved those scenes in “Anna Karenina” - partly because I was a teenage girl and liked to read about who wore what to the horse races, but partly also because you sense, with Tolstoy, that he sees through all those empty forms as clearly as a French person, but he’s carried away by them all the same.

IDEAS: How did your relationship to the literature and to Russianness change over the years that you were studying it?

BATUMAN: I realized as I went along how small the body of work was. The Russian literary tradition is quite short. There’s some stuff before Pushkin but you don’t have to know it unless that’s your thing. It’s really from 1800 to the early 20th century. So there’s a depth of reference that people can go into because they’ve all read the same things. That was probably the most surprising thing to me, that people can sit around and discuss the little green leaves in “The Brothers Karamazov.” Everyone has something to say about the little green leaves.

IDEAS: Is Russian literature studied differently in Russia than it is in the United States?

BATUMAN: In America, it’s an equal show between the critic and the author, whereas in Russia, the text is definitely the main thing. Critics are always trying to keep personality out of it, more or less successfully. They don’t like a whole ton of critical apparatus. In America, critics are more conscious of trying to appeal to students and a wider potential audience, whereas in Russia, they don’t care about any of that. At conferences, critics will talk without notes nonstop for two hours and if people don’t understand, that’s their problem.

BATUMAN: As far as I know, the kind of stuff that’s being written in Russia tends to be these little allegorical, surreal fairy tale-like things that Ludmilla Petrushevskaya and Victor Pelevin are doing. There aren’t huge novels that you can get lost in. There’s a lot of poetry going on, and a lot of it’s supposed to be brilliant. Stuff like that doesn’t get translated, and it’s very hard to translate. A lot of it it’s supposed to be politically subversive, so that would be difficult to export and probably [critics] there wouldn’t be writing about it either.

IDEAS: Do you read much contemporary Russian writing?

BATUMAN: I’ve developed this love of trashy Russian literature. There’s a women’s detective series that I was obsessed with for a while, written by Aleksandra Marinina, the former chief of police. In each one, the seeds of some kind of murder were planted during the communal apartment period, when everyone was living and festering in these spaces. She describes the furniture and food...they remind me of the time I spent in Russia.

IDEAS: What do the classic Russian novels offer us that make us keep returning to them?

BATUMAN: The dominant question for us with regard to literature has become, “What does this have to do with me, with life as I know it?” That’s the question answered by all these books about how Proust was actually a neuroscientist, or how Proust can teach you emotional intelligence. For us to keep reading “classics,” we need to believe they’re applicable to us right now. The Russian novel is, in a way, all about that question. Take “Crime and Punishment”: Raskolnikov is asking, “How does Nietzsche apply to me, a destitute student living in Petersburg? Can I maybe become a superman by murdering a depressing old lady?” That resonates with us, because it’s an experiment in applicability taken to the furthest degree, and not in an abstract way, but in the most concrete, concretely observed way.

Peter Terzian is the editor of the anthology ”Heavy Rotation: Twenty Writers on the Albums That Changed Their Lives.”