The case for selfishness in an egalitarian sport

IN THE WINNER-TAKE-ALL arena of American youth sports, soccer has always been the exception. From the earliest ages, children on basketball courts and football fields have been taught ruthless competition, even been rewarded for showboating at others’ expense - nearly the opposite of the values we hope they learn in school.

Soccer, however, has offered a refuge: the kibbutz next to the stadium complex, a team-oriented, egalitarian game friendly to both genders and a range of body types. Since emerging as a favorite suburban sport a few decades ago, soccer has thrived under baby-boomer parents looking to teach selfless fitness to their kids.

Such a philosophy isn’t just wishful thinking on the part of parents; it is explicit in the organizing principles of the US game. The tribune of the recreational soccer establishment, the American Youth Soccer Organization, was established in California in the 1960s, under a philosophy more humanist than competitive: “Everyone plays.”

But over the last decade, American soccer elites have begun to question this entire approach. In the realm of soccer itself, they worry that the youth game’s communitarian culture is to blame for the country’s World Cup failures. And as far as the kids are concerned, they argue that the teamwork-first ethic has become a national weakness: a philosophy that stifles native talents and enthusiasm in America’s most popular youth sport.

“We take the creativity and imagination out of players at a young age,” said Thomas Rongen, coach of the United States under-20 men’s national team.

So in the past several years, Rongen and other leading coaches have begun preaching a solution that would probably strike most liberal soccer parents as an embrace of the worst in human nature. In a word, they want to make soccer more selfish.

For these coaches, a period of indulged selfishness as kids learn the sport is a necessary step. By getting kids excited about what they can do with the ball, instead of just training them how they can best serve the team, they will begin to develop their own talents.

This philosophy is starting to take over youth soccer, changing the kibbutz from the inside. Local recreation leagues are no longer a safe place for 6-year olds to dutifully learn share the ball with their teammates, instead becoming a factory for ball hogs eager to show off what they can do. And if the coaches are right, both soccer and the millions of kids that play it every Saturday will emerge stronger.

IN PARTS OF the world where soccer is the dominant spectator sport, children don’t follow coaches’ instruction so much as model themselves on players whose stylish moves earn them national adoration.

In those cultures, children hone their skills naturally through relentless informal play, rarely with adult oversight. For the kid on the asphalt of Marseille, or winding through a Sao Paulo favela with a ball of rags at his feet, soccer offers a creative outlet, a way to develop what can be remarkable skills of improvisation and intuition. Such organic conditions have helped to birth the world’s most dazzling players, aggregated into teams that reflect the great clichés of national soccer styles: the fluid Brazilians, the artistic French.

In the United States, on the other hand, toddlers are introduced to soccer as something that requires a team and clipboard-carrying coach. Orange plastic cones, arranged into a variety of geometric forms to mark boundaries or obstacles, are essential for dribbling and passing exercises. Even under-6 leagues often play with a formal field layout and a referee. The training regimes imposed on even the youngest athletes, critics say, have conditioned American children to be helpless without coaching structure.

“In other countries they don’t need cones - they might throw down sneakers and be playing within five minutes,” says Darren Marshall, a development coach for Massachusetts Youth Soccer and regional staff coach for the US Soccer Federation’s Olympic Development Program. “Often the reward for the players is doing something spectacular, even if not always scoring.”

“Here if you take 30 or 40 kids and put them in a grassy area with no lines, cones, and give them a soccer ball, about 10 minutes in you’ll see two kids pass it back and forth,” he says. “After 20 minutes they look around and ask for direction - what should they do? Maybe after you wait an hour they’re just starting to get playing.”

As soccer became the United States’ most popular participatory youth sport, leading American coaches like Marshall began to wonder why the large, well-funded, athletic-minded country had not found success at the international level. A look at the US men’s national team roster pointed at one problem: a generation of players who are physically strong and competitive but never developed the sophisticated skills needed to move the ball creatively across the field. Americans could occasionally overpower top-flight European and South Americans teams with a direct style, but would rarely dominate a match.

“Some of our kids play like hell, run like hell, and do things that don’t make them better soccer players,” said Jay Martin, the editor of Soccer Journal, a publication of the National Soccer Coaches Association of America. “We’re developing a country of people that depend on a level of athleticism to win, but don’t know how to play the game.”

As blame for this began to fall on youth soccer, official coaching philosophy has started to change. The training manuals and videos that US Youth Soccer sends to its 300,000 member coaches nationwide now recommend scrapping rigid and artificial exercises involving cones and lines.

They suggest ways to reduce the amount of instruction entirely, instead creating loose situations where kids get a lot of access to the ball and are able to experiment with it. No adult with a whistle will stop a cocky player from making a daring run at goal, or scold her for insouciantly challenging a defender when a teammate stands nearby waving for the ball.

“We need to create a good environment without the overcoaching we tend to have in this country because it’s part of our sports culture,” said Rongen. “We’re almost too structured and organized at those age groups, and kids are not allowed to express themselves.”

THE DEBATE OVER how to train kids has pitted the country’s professional coaches against the volunteer class that trains the 3 million American kids who play the sport. Volunteers, who tend to be college-educated parents with little if any soccer-playing experience, are often unable to demonstrate proper ball skills themselves and discover refuge in field diagrams and rigid passing drills.

Instead, many volunteer coaches have familiarity with football, baseball, and basketball, where coaches engineer team plays and manage discrete situations with the aid of timeouts and regular stoppages in play. In soccer, they are drawn to risk-averse, team-minded tactics that deliver a shortcut to wins, keeping parents happy without necessarily helping players’ long-term growth.

“The parents are the ones clamoring the loudest for wins, because they associate development with wins. If I teach kids new ball skills, and tell them to experiment with new ball skills during games, they’re going to make a mistake, lose the ball, and give up a goal,” says Sam Snow, the coaching director for US Youth Soccer.

Snow, like an increasing number of professional coaches, would like to see leagues stop demanding that kids be team players - even keeping them out of full-scale soccer games until as late as age 12.

The result, if it takes hold, will be a game that does not invite idealism any longer. The game’s “everyone plays” ethic has come at the expense of individual talents and creativity, and repairing that will require abandoning the communitarian spirit that brought a lot of American families to the game.

For the millions of parents whose kids play soccer every weekend, it may take a while to adjust to this new vision of the sport. After all, the lesson that professional coaches are teaching runs cheerfully counter to the stoic, eat-your-vegetables idea underpinning much modern parenting. What’s best for children over the long term, in this case, may be exactly the thing that brings them the most gratification now.

Sasha Issenberg, the Washington correspondent for Monocle, is the author of “The Sushi Economy: Globalization and the Making of a Modern Delicacy.” 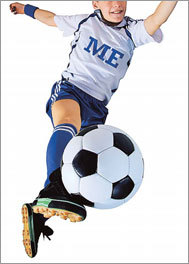 (istockphoto, Globe Staff illustration)
Your comment is subject to the rules of our Posting Policy
This comment may appear on your public profile. Public Profile FAQ