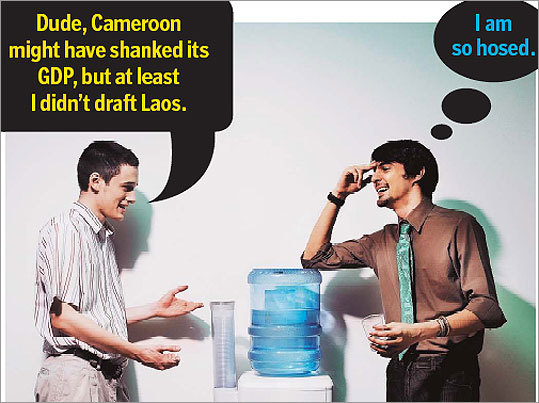 With the fall sports season in full swing, fans everywhere are following their fantasy teams. They have already chosen who their quarterbacks will be, decided whether or not to draft running backs in the first rounds, and determined if there is ever a good reason to choose Terrell Owens. And every week, these managers are absorbed in deciding who their starting lineup will be on Sunday, anticipating the effects of injuries, and making trades sometimes just to keep their opponents guessing. They have also likely spent a nontrivial amount of time choosing the perfect team name. For the fantasy football fan, it’s a thrilling and, for some, all-consuming activity that is synonymous with the crisp of autumn.

Of course, this leaves many people out in the cold. You want to follow something all your own and rub its success in the faces of your friends, but you’re just not that into sports. Well, I would like to suggest a novel alternative: fantasy geopolitics. Instead of being the manager of a sports team, you’re now the head of a group of nations, with your statistical performance pitted against the performance of your opponents. It’s your very own NATO, minus the Cold War baggage.

How does it work? First, you draft your countries. There are about 200 countries in the world, so in a league of 10 players, each player chooses 15 countries. To keep things fair, there are distribution requirements: There must be at least two countries from each of North America, Europe, Asia, and Africa, and at least one country from each of South America and Oceania. This will prevent a team from loading up on certain areas of the planet. (Another option is to include a GDP cap.)

At the start of each week, you have one day solely devoted to trades and updating your roster of five active countries that will be scored. Then, once you have your fantasy region and the active lineup, you and the other members of your league start to compete on the basis of a variety of economic and demographic indicators.

How’s your country’s stock market? If Thailand is part of your fantasy region, pay careful attention to its ruling monarch, King Bhumibol Adulyadej, as his health can make its market plunge.

Has the GDP grown? Angola and Bhutan’s astonishing growth in the 2008 season are stories that fantasy geopolitics players will not soon forget.

Inflationary measures and exchange rates are also factored in, making Iceland a bad bet to hold this past year due to its economic meltdown. And if you had Zimbabwe in your active lineup in January, when its government unveiled the 100 trillion dollar bill, you would have probably considered going back to losing at fantasy football.

Some variants include other indicators that are only recalculated once every few months, as well as seasonal or rarer scoring situations. Is your country far below the replacement fertility rate for population growth (about 2.1 children per woman)? Consider this before you choose Russia, whose population has been shrinking for quite a few years. Also, points are awarded if the leader of your country speaks at the UN General Assembly opening session, and you get a point if a citizen of your country gets a Nobel Prize (dual citizenship yields half a point). The acquisition of Barack Obama as leader by the United States provided some surprise scoring opportunities. Conversely, you lose points based on a country being at war. So, while not being a very wise selection in past decades, Sri Lanka might be a smart draft pick for your fantasy region, with the completion of its violent civil war.

Of course, there are many other statistics that are included in any serious game of fantasy geopolitics. But there is a bit of a problem. The object of a well executed fantasy sport is to participate (obsessively) in a rapidly changing environment, so it is vital to have frequently updated stats. This is admittedly a little hard to find in world affairs.

But do not despair! Fantasy sports, from their beginnings in Rotisserie League Baseball three decades ago, have driven the proliferation of increasingly detailed sports statistics and analysis. So, too, in the global realm, timely data are becoming more available. Hopefully, governments will continue the present push for transparency by increasing the publication of useful statistics. In addition, with constantly updated indexes that feed off the growth of such real-time information as Twitter and online searches, we are beginning to get a sense of the current state of the world. For example, scientists at Google have shown how tracking users’ searches can be used to create metrics for unemployment. fantasy geopolitics will likely impel the production of many more such measures.

With more timely data, following the ebb and flow of world affairs will only get more exciting. And by getting people to recognize the drama, and even the beauty, inherent in the numbers that gauge our many nations, we can perhaps inspire them to think about how to improve the numbers themselves.

Samuel Arbesman is a postdoctoral fellow in the Department of Health Care Policy at Harvard Medical School. He is a regular contributor to Ideas.