She’s just not that into it

It goes without saying that men are aggressive. But that’s exactly the problem, according to psychologists. They asked men and women to imagine various conflict scenarios and found that men systematically overestimate the prevalence and social approval of aggression, even while having mixed feelings about it themselves. Moreover, men assumed that women viewed aggression as more attractive than women actually viewed it, and, indeed, the number of fights that men reported being in was correlated with how much they thought women approved aggression. In addition to increasing the risk of conflict, there was evidence that men’s misperceptions about aggression may take a psychological toll, in the form of lower self-esteem and alienation from peers.

A time to try something new
Whenever you’ve experienced major changes in life, have you sought comfort in familiar things? If you’re like most people, your answer is “yes.” However, new research suggests that the real answer is probably no. When Americans were offered a choice between American potato chips and British potato “crisps,” those who indicated a greater degree of concurrent life change preferred the crisps, while those not experiencing change preferred the chips. Yet, most people predicted the opposite choice. This pattern also held for nonfood choices, such as deodorant and entertainment. The researcher also ran an experiment that randomly assigned people to list more (vs. fewer) life changes that were occurring and then make the same chips-vs.-crisps choice. Listing more life changes increased the preference for crisps.

The green premium
You know what they say, a penny saved is a penny earned. When it comes to energy conservation in office buildings, this may be truer than you think. Researchers analyzed data on thousands of office buildings across the United States and found some very encouraging results. Buildings with a “green rating” earned higher rents and even higher selling prices per square foot than nearby buildings of similar quality. This premium was directly tied to energy savings, though reputational benefits may have also had an impact. Although the energy efficiency of office buildings may not seem like a sexy part of the energy and climate change portfolio, the researchers note that buildings account for around 40 percent of raw materials and energy use and at least 30 percent of greenhouse gas emissions.

Think and grow rich
We live in an information economy, where success depends more on brains than brawn. But what about people in developing countries, where there are far fewer computers and office jobs? Doesn’t it pay to be healthy and strong? A team of researchers looked at a group of people in Guatemala and found that the answer seems to be no. Several decades ago, a nutritional study was carried out on children in four Guatemalan villages; two villages were given a high protein energy drink, while the other two were given a low protein energy drink. Several years ago, researchers decided to follow up with these villagers and collect data on variables like wages, work hours, income, adult reading test scores, educational attainment, fat-free body mass, and height. A rigorous analysis of the data revealed that intellectual development was the only variable that actually predicted wages, hours, and income. The authors emphasize that such a finding ultimately strengthens the case for boosting early nutrition, not for its impact on health per se, but for its impact on intellectual development.

Guilt works
Motivating cooperation - and preventing free riding - is a recurring theme in social science, given that the fate of organizations and communities often depends on voluntary contributions. This is just as true in the online world, and a recent study offers some guidance for online communities. The researchers ran an experiment with several hundred users of a movie rating website. Users were randomly assigned to receive an e-mail newsletter that indicated how many ratings they had contributed relative to the median contribution from a similar user. Among users who received this information, those who were below the median sharply increased their number of ratings in the following month, while those who were above the median scaled back. This suggests that administrators can boost overall contributions by selectively targeting under-contributors with social-comparison data.

Kevin Lewis is an Ideas columnist. He can be reached at kevin.lewis@gmail.com. 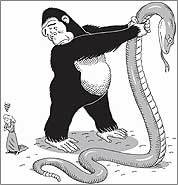