The literary lion who hated us, and why we love him anyway 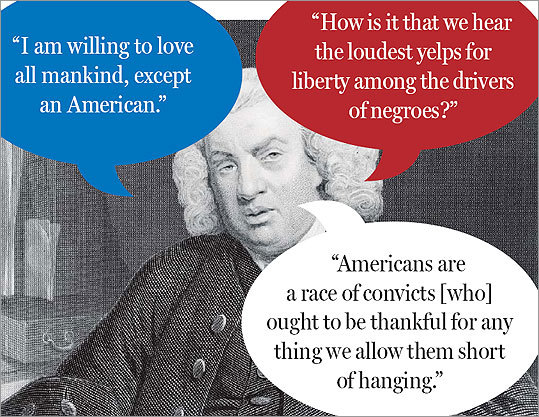 Samuel Johnson, born 300 years ago last week, has long been known as one of the great wits and wordsmiths of the English language: poet, critic, biographer, journalist, editor, novelist, bon vivant, and, of course, author of his pioneering dictionary.

Johnson has also, over the years, enjoyed widespread popularity in America. During the War for Independence, when good patriots were expected to abjure all things British, the founders made an exception for Johnson; George Washington’s copy of Johnson’s dictionary is at the . Johnson would later serve as a muse to both New England’s Transcendentalists as well as to a host of our canonical novelists. Today Chief Justice John Roberts re-reads the satiric poem “The Vanity of Human Wishes” every year, and America is home to more than half of all original Johnson manuscripts. Late last month scholars gathered at Harvard’s Houghton Library, where the papers reside, for a three-day symposium marking the tercentenary of his birth.

It might seem that Johnson would have been flattered by the unwavering adulation of a nation whose birth came at the end of his own storied career. But far more likely, he would have been horrified. As a look at Johnson’s writings reveals, he showed little interest in reciprocating our affection, instead showering Americans with a more or less ceaseless rain of scathing epithets. In 1769, he called Americans “a race of convicts [who] ought to be thankful for any thing we allow them short of hanging.” Johnson never set foot on our shores and met few Americans, but had a clear idea how he felt about the colonists. In response to the First Continental Congress, an apoplectic Johnson was compelled to dash off - he tended to write in manic bursts - “Taxation no Tyranny,” a 40-page pamphlet, vilifying the rebellious colonists as “these lords of themselves,” “these kings of Me,” and “these demigods of independence.”

As a hardline Tory and firm believer in governmental authority, Johnson feared that “the madness of independence” would destabilize the cosmic order. He was infuriated not just by our adolescent protests against parliamentary rule, but by our hypocrisy over the issue of slavery. “How is it,” Johnson wondered, “that we hear the loudest yelps for liberty among the drivers of negroes?”

After the first skirmishes of the Revolution, he didn’t budge, confiding to his legendary biographer, James Boswell, “I am willing to love all mankind, except an American.” His antipathy even extended to the discoverer of the continent, Christopher Columbus, whom he vilified as a “wild projector, an idle promiser of kingdoms in the clouds.”

So what explains the American love of Johnson? Is it rooted in a cultural inferiority complex, a compulsion to cozy up to the very authority figures who most revile us?

Not necessarily. In fact, Americans may have always understood Johnson better than the man understood himself. Temperamentally, Johnson was more like us than he cared to admit. Like Benjamin Franklin, whom he met briefly in London in 1760, Johnson emerged from humble beginnings and overcame considerable hardship to become England’s “colossus of literature.” Born partially blind, he developed scrofula in infancy; poverty forced him to drop out of Oxford, a trauma that left him depressed for years. His formidable courage enabled him to surmount these obstacles. As the American novelist Nathaniel Hawthorne once put it, admiringly, “Sam Johnson fought his way through the world by himself.”

A self-made man in a country run by aristocrats, Johnson was a pragmatist and common-sense philosopher who steered away from grand theoretical systems. No isolated academic, he was an entrepreneurial writer. He aspired to scrupulous honesty about his motives, including his need to earn a living. “No one but a blockhead,” he said, “ever wrote, except for money.” An ethical man who distrusted cant, Johnson was a fiercely independent thinker who appealed to American advocates of self-reliance such as Ralph Waldo Emerson. “He stamps every sentence with his own mode of thought,” wrote an envious Emerson.

In contrast to the dictionaries-by-committee which cropped up on the continent, his 1755 magnum opus was the work of a solitary genius - who relied on his masterful command of English literature (and a handful of assistants parked in his Gough Square garret). The vigor of Johnson’s anti-Americanism has typically been chalked up to his penchant for strong opinions - he would have been quite at home at those town-hall debates on health care - and the colonists furnished a natural foil to a man who considered himself a lion of England. Bear in mind, America’s bête noir, King George III, had granted him a generous royal pension.

With a few exceptions - Walt Whitman called him an “old Octopus” - Americans have been decidedly tolerant of Johnson’s bile, rarely taking his invective at face value. Instead we have looked past the bluster to the character of the man behind it. Without Johnson, America wouldn’t have had its own great dictionary - his collection of moral essays, “The Rambler,” inspired a young Noah Webster to dedicate his life to pursuing “a most exact course of integrity and virtue,” and to compiling his massive American Dictionary of the English Language, published in 1828.

Two hundred and twenty-five years after Johnson’s death, it’s hard not to wonder if the great man’s eloquent venom was actually a case of “protesting too much.” The man whose own fortune was so closely tied to the burgeoning British empire, who roared in defense of the establishment even while charting his own enterprising course, may well have noticed a touch of himself in those ambitious rebels 3,000 miles away.

In celebration of Johnson’s birthday, Harvard’s Houghton Library is exhibiting some of its collection - including Johnson’s only surviving letter to his wife - through November. Joshua Kendall is the author of “The Man Who Made Lists: Love, Death, Madness and the Creation of Roget’s Thesaurus.” His biography of Noah Webster is to be published in 2010.